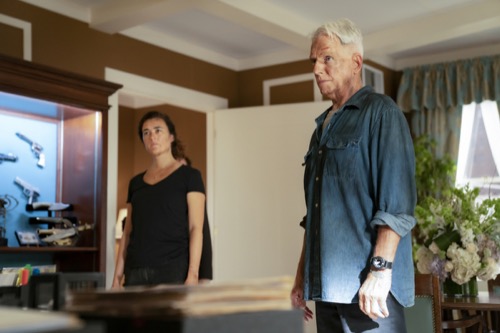 Tonight on CBS NCIS returns with an all-new Tuesday, September 24, 2019, season 17 episode 1 premiere  called, “Out of the Darkness,” and we have your weekly NCIS recap below. On tonight’s NCIS season 17 episode 1, “Out of the Darkness,” as per the CBS synopsis, “Ziva surprises Gibbs with a cryptic warning, prompting him to question why she remained underground for years while being presumed dead by family and friends, and what led to her return, on the 17th season premiere of NCIS.”

Ziva came out of hiding. She felt compelled to when she heard that Gibbs was in danger, so now she’s out among the living again and this time she’s working with Gibbs towards a common goal. They’re both trying to keep him alive. They had to fight off the men that attacked the house and then they were gone before the local police came. The police, however, did call McGee. He responded to the call because he recognized it was Gibbs’s home and he brought the rest of the team with him. They were out for drinks together when that call came in.

Though once they heard it was Gibbs, they went together to his boss’s home and they found it wrecked. They saw signs of a killing team. They even found the dead body of one of the men and so they just wanted some reassurance their boss was still alive. He wasn’t found at the house. There was evidence someone used an old shoot to escape and there was also a piece of fabric wedged in there. It wasn’t something their boss would wear. McGee said it might have belonged to the killing team and Bishop was the one with the different theory.

Bishop wondered aloud if Gibbs could have had an ally for the gunfight. She downplayed her theory when pushed, but it changes the fact she said it nor did it stop the guys from being suspicious. They were even more so when they realized that Bishop never went back to the office. She claimed she was bringing the fabric to be tested and instead she went to Ziva’s safe house. Bishop had been so sure that Gibbs had an ally because she saw that fabric. She saw a coat made of the stuff at Ziva’s place and she saw that coat when she went back over there.

Bishop hadn’t only known half the story. She thought Ziva barely survived that house explosion and that wasn’t the truth. Ziva had hidden her survival because someone was after her father’s files. She went into hiding and gave up her own child because someone was trying to kill her. Ziva was explaining the story across town to Gibbs. She said a woman named Sahar wanted her dead and that she didn’t know why. She’s never met Sahar. She just knows that Sahar was leading a team to hunt her down and that now they turned to the one person that Ziva was closest to – Gibbs.

Ziva explained how she didn’t really have anyone else. Her daughter was still a baby and DiNozzo could only talk about lost love. All Ziva truly had was Gibbs. The men sent to his house were going to use him as leverage against her and Ziva went there first to stop it. Only her intentions didn’t seem to have helped them out so much. Ziva was now on the run with Gibbs and he was refusing to go to the safehouse. He wanted to help. Gibbs went with Ziva when she picked up an SD card from a bus and they were waiting for the perfect opportunity while things were happening back at the office.

Bishop was forced to tell McGee what was happening. He knew she was keeping something back so he pushed until she cracked and then it just became weird when they kept Torres out of the loop. Torres could see they were withholding something from him. He even caught out Bishop in a lie to the Director and that’s when he demanded to be let into the loop. He eventually found out that Ziva was alive. His mind was so blown from that, that he kept repeating it in what he thought was an empty morgue so that’s how Palmer found out.

With those in the loop widening by the second, those that were in know decided to close ranks and they kept the truth from Kasie. They didn’t do too good of a job because Kasie could sense something was off. She just didn’t pry Torres did and kept on with the job. She told everything they needed to know about the John Doe in the morgue. She also left the second she was done because she didn’t want to get wrapped in whatever they were doing and that’s why she’s the smart one. Kasie wanted nothing to do with the situation.

Funnily enough, Gibbs wasn’t thinking about that when he came up with the idea to contact either Kasie or McGee about the SD card. He wanted someone that could decrypt it. He thought about Kasie first and then decided to go with McGee because he knew McGee could keep a secret. He then called McGee to ask him this favor though he didn’t know that McGee was now in the know or that McGee found some information for him. McGee and Bishop found out about this Sahar. They believe the woman’s full name is Mira Sahar Azam.

Sahar was a POW in Syria. She got out just a week before Ziva’s farmhouse blew and that’s a good enough reason to believe she was the Sahar that Ziva was looking for. There was just the question of why left. Why did Sahar was Ziva dead? Ziva got help on that encryption from McGee and was back on the road before long. Ziva wanted to check who this Sahar was for herself. She came close to get the information when Sahar’s men found them. Ziva and Gibbs were forced back on the run and this time they passed by McGee while they were doing it.

McGee didn’t let this go like he was told. Gibbs told him to stay out of it and McGee ignored that order because he cares about both Gibbs and Ziva. Ziva had been like a sister to him. There was nothing he wouldn’t do for her and so he followed her when he saw her get in a car with Gibbs. McGee even took Torres and Bishop along for the ride. They didn’t know it at the time, only they went to an old burned down diner that Kasie told Gibbs about. It seems she found evidence that the men out to get him were staying and breathing in infested air from this diner.

So, Gibbs and Ziva showed up at this diner. McGee and the others couldn’t follow them that far because the Director found out about everything and demanded they come in. He wanted a full briefing. It was only after he got it that he ordered them to return to the diner, but McGee said Ziva would have a plan and could handle the rest on her own. His belief in Ziva was so strong that he managed to convince the director that she wouldn’t do something that would put either her or Gibbs at risk.

McGee was talking about the old Ziva. The new Ziva was coming down from pills she took to stay awake and she truly believed that she needed to kill Sarah. Which is why after she killed Sahar’s men, she leveled a gun at the woman and Gibbs was forced to stand in her way.

Ziva now has to decide which was more important to her. Revenge or her friendship with Gibbs?