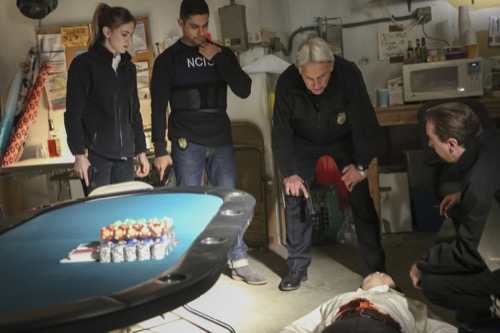 Tonight on CBS NCIS returns with an all-new Tuesday, March 12, 2019, season 16 episode 16 called, “Bears and Cubs” and we have your weekly NCIS recap below. On tonight’s NCIS season 16 episode 16, “Bears and Cubs,” as per the CBS synopsis, “Jimmy is torn between family and work after his father-in-law, Ed asks him to tamper with evidence from NCIS’ current murder investigation. Also, Ed’s poker buddy, Anthony DiNozzo Sr., offers to help with the case.”

A couple hiking came across a mauled body. The body was that of Petty Officer Third Class Logan Braddish and it appeared that he had been attacked by an animal, but the only thing big enough to fit the description would be a black bear and they usually don’t attack humans. In fact, most animals tend to shy away from human activity unless provoked and so the team tried to piece together if maybe the petty officer disturbed a bear with its cubs. Such a situation would mean the bear felt her cubs were under threat and would try to protect the only way they understand – which was to attack. It would at least explain the vicious way the petty officer died. He had claw marks all over his face as well as body and there was a claw found in one of his wounds. And so that could have easily broken off during a bear attack.

Palmer had want6ed to be sure and so he brought the body back to his lab. He took a few samples that he wanted Kasie to run and he was going over the body again when he received a surprise visit. His father-in-law Ed said he was in the neighborhood and thought he should stop by. It was unusual for him to stop by that and so Palmer tried to ignore it at first. He was still going over the body when he noticed one of the claw marks looked like a knife wound, but that’s when Ed spoke up. Ed begged Palmer to claim the knife wound was a bear attack and so Palmer covered for him. He told Gibbs that it still looked like a bear attack and he pretended that it was until he got the chance to talk to Ed alone.

Ed owed him an explanation and Palmer wasn’t going to let it go until he knew why he was covering up a murder. So he waited and finally, Ed began to be honest with him. It turns out that Ed has a gambling fetish. He liked to bet big money and he recently lost fifty thousand at an illegal gambling game. Ed said he tried to work out a payment plan and that the guy he owes didn’t want money. He instead wanted Ed as an undertaker to cover up a murder. It was up to Ed to fake a bear attack on the body of the young man and the cleaner didn’t want this body to be traced back to him. It was a massive coverup and Ed had done a reasonable job, but he overlooked certain mistakes that Palmer picked up on and unfortunately Palmer had already alerted others about the discrepancies.

Palmer’s samples to Kasie came back clean of bear saliva. She knew that no bear could attack someone so cleanly and so she turned to a returning Ducky for help. Ducky came back from his tour early and he wanted to be useful. He tried to assist with the autopsy and after being turned down by Palmer he figured he could work with Kasie. The two of them were bound to figure out what was going on and so Palmer started to panic. He went to Ed about what they could do and they thought they had a plan because Ed knew old man DiNozzo. DiNozzo was known to Palmer and he asked his friend’s father for help. DiNozzo said that he could come through for the guys, but Ed hadn’t been entirely truthful with either of them.

Ed forgot to mention that the cleaner has his son Stevie. Stevie was being hostage somewhere and Ed wasn’t going to get his son back until the matter was solved with the dead navy officer. To make things worse, it had been Ed’s idea to make the death look like a bear attack. His actual orders had been to cremate the body and so Ed was the one that had this outlandish idea to fear a rare occurrence with a bear. It was also revealed that Ed was horrible at poker. He had so many tells that it had been easy to defeat him and that’s why no one understood why eh kept raising the bet when all knew he had a defeating hand. Ed has been nothing but a big pain in the neck since he came to see Palmer and so Palmer finally had enough.

Palmer stopped Gibbs from informing Braddish’s family that he died from a bear attack. He didn’t want the family to believe in the lie and so he came out with the truth. Palmer told Gibbs everything and all that Gibbs asked for was honesty going forward. It was going to be some time before Gibbs could trust Palmer without question, but they both had to make things right for the victim and so NCIS went to go arrest this dry cleaner. They went to his place of business and found the cleaner dead. He had been murdered and there was no sign of Stevie. Stevie even seemed like a good suspect and so Gibbs interrogated Ed with Palmer’s help. The two of them got Ed to admit that he had lied again.

It had been Stevie with the gambling problem. He had lost over two hundred grand and Ed thought he could cover the debt by betting big at a different game, but Ed was a horrible player and so he did was make their debt worse. Neither he nor his son knew what to do until they were approached by someone that claimed they would rid them of debt in exchange for a favor. This guy who identified himself as Kenny was really Keung Deng. He was from a wealthy family back in Singapore and he liked to party hard. He got kicked out of school when he was arrested several times for disorderly conduct and since then he’s disappeared off the map. The last time he showed up he had a dead petty officer in the boot of his car that he wanted Ed to get rid of.

Ed was supposed to cremate the body and he didn’t because he thought a young man like that must have family that deserved to know he died. But Ed was still in trouble for what he did and that says nothing of Stevie. Stevie was still missing and the team believed Deng had him. They tried to find Deng and were told he skipped town because he owed everyone money. Deng it seems had been financially cut off and that sounded like his father was aware of how much trouble he was in. It was the same father that willing to sneak Deng out of the country and so the team had Ed speak to the man’s father. As one father to another, Ed was able to make Mr. Deng see that shielding their adult children means they’ll never grow up or face the consequences of their actions.

The location of Deng was handed over to NCIS and they were able to rescue Stevie, but the two fathers involved in the matter both realized that now was the time for their children to finally grow up.

And tonight Ducky told Gibbs that it was time for Palmer to become the Chief Medical Examiner because Palmer deserved it and Ducky felt it was time to retire.