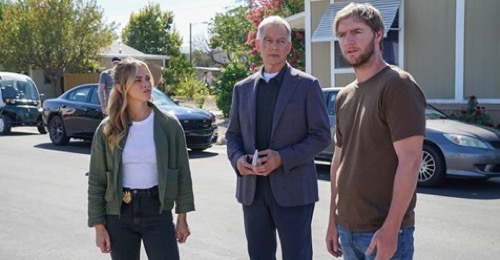 Tonight on CBS NCIS returns with an all-new Tuesday, October 15, 2019, season 17 episode 4 called, “Someone Else’s Shoes,” and we have your weekly NCIS recap below. On tonight’s NCIS season 17 episode 4, “Someone Else’s Shoes,” as per the CBS synopsis, “The NCIS team links a bizarre crime scene at Arlington National Cemetery to a string of attacks on homeless veterans. Also, Vance orders McGee, Bishop, and Torres to complete hours of evidence garage cleanup duty for withholding information.”

NCIS was called about a horse. A horse was set loose at the Arlington National Cemetery and it turns out this animal carrying afoot. The foot was unfortunately human. There was also a second foot that was later found and so this was starting to look like a crime. It was clear that the feet had been severed, but the trauma was fairly recent and the feet themselves were the least of the team’s concerns. Their main problem was the cemetery. The cemetery was sort of its own little place so no one whose jurisdiction this crime fell under.

They only decided on NCIS because the team had brought Palmer with them. He was the first Medical Examiner at the scene and the cemetery was eager to hear from someone with authority on the matter. Palmer first noticed the feet held sores. As if someone had been living rough. Palmer suspected that the victim could have been homeless, and he was right. The feet belonged to Marine Sergeant David Holtzman. Holtzman was living on the street and his feet were getting better because he was seeing several doctors at the VA hospital.

The main doctor didn’t remember Holtzman. She said that she had to see so many patients a day that it was hard to keep track of them and sadly she wasn’t alone in being overworked. Veteran Affairs didn’t really take responsibility for what happened to the veterans. They force them to jump through several hoops and then offer them the barest form of help. Its why so many of them were being driven out onto the streets. They were dealing with untreated PTSD as well as debt for having to pay medical bills out of pocket.

Only the doctor at least realized the system was broken. She said no one wanted to help these veterans and she may have been wrong. It was clear that when the systems fail them, they could only depend on each other and that ended up with this case. Gibbs and McGee went to the shacks where most of the veterans stayed. They went looking for someone who knew Holtzman and they found a friend. The guy hadn’t seen Holtzman. He was also beginning to worry and so he came with them as they began searching for the camp.

The team was hoping to find some signs of blood, but what they found was much worse. They found several bodies nearby and all were murdered vets. It seems that their killer was targeting a group he felt was vulnerable. The vets there were all suffering in their own way and the same went for Holtzman’s friend. Marine Lance Corporal Bernard Williams didn’t even want to admit his status as a vet because he felt too ashamed of his current position. It was suggested that he talk to Sloane and he clammed up once he realized she was a shrink.

Williams said he didn’t want to talk about himself when someone was targeting his friends. Holtzman and a woman by the name of Norma Jean were both dead. Her records should have been at the VA hospital and yet the hospital was giving Kasie the runaround. Both Torres and McGee decided to just go down there to get the files, but they found out the doctor they had spoken with earlier had received threats and that she also found two severed hands pointing at ashes in the cupboard.

It seems this killer had wanted to send a message. They sent the foot with a horse because horses were a military symbol honoring the dead for funerals and then they started to literally point the blame with severed hands. This killer was trying to highlight the unfair treatment of the veterans. This plan was also working because that’s what’s on the news nowadays and all anyone can talk about is what’s happening with the veterans. Sloane had considered this message as she began suspecting Williams of being their culprit.

Sloane didn’t want to suspect him because she personally liked him. Yet, it didn’t change the fact that he knew the camp, the victims, and that he was trained to get around security protocols at a hospital. Williams was a viable suspect and so Gibbs went to go talk to him. He tried finding Williams on his own and he instead came across an aid worker that said Williams had been attacked. He was hit from behind. He never saw his attacker and his attacker had stolen his very personal journal.

Williams wrote everything down in that journal. He detailed how he took time off to spend with his sick mother and that her medical bills ended up bankrupting him. Williams’s journal was his way for him to let go of all of his pain, but then someone took it. He thinks his attacker took it to get information on the case and so Gibbs kept watch to see if the attacker would come back. He actually ran across a podcaster and he had to put her in her place before she moved on. And so Gibbs thought nothing would come out of the watch.

Then Bishop texted him. Bishop found out that a private company was making a profit out of the homeless sector and that he were to make more if a new bill went through. One that would increase for veterans thereby increasing the profit this company could make on the back of veterans. The company was called Mercy Point Mobile Care and Kyle Freeman not only worked for the company, but his family owns it as well.

Freeman was actually still at the homeless camp when Gibbs and his fellow veterans took him down.

They got their payback for their fallen friends and they also highlighted their own stories for social media.

Now, the whole world will know what was happening to veterans when they were coming back home and this time Williams wasn’t afraid to tell his own story.