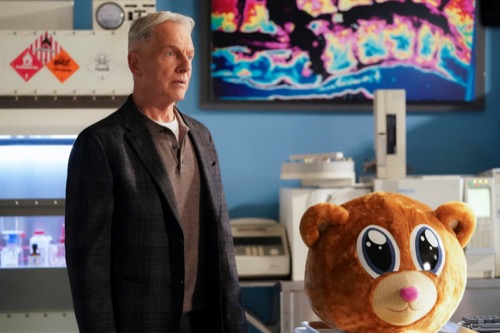 Tonight on CBS NCIS returns with an all-new Tuesday, November 26, 2019, season 17 episode 9 called, “IRL,” and we have your weekly NCIS recap below. On tonight’s NCIS season 17 episode 9, “IRL,” as per the CBS synopsis, “The NCIS team investigates a petty officer’s murder that was live-streamed on a popular gaming app. Also, Gibbs watches his 11-year-old neighbor, Phineas, when his mom must leave on a last-minute trip.”

A murder was accidentally live-streamed! The victim was later identified as Petty Officer First Class Ian Rojas and he was killed while he was recording himself playing a videogame. The game was some shoot-up nonsense. It had no bearing on the case and it was only related because of the manner of his death and because it was used to identify the victim. At first, no one knew who he was. He went by the username “NAVYgamer-z” when he’s online and that was enough for the local police to pass this one off on NCIS.

Therefore, the team merely suspected he was Navy when they were given this case. It was after they ran facial recognition that they realized his name was Rojas. Rojas was on leave and he seems to have been enjoying himself when he died. He makes a living out of playing videogames. He earns more doing that than he does as a Naval Hull Technician. He also spent so much time online when he’s home and that he didn’t really have a life. He had the NAVY and he had his online persona. Rojas did a great job separating the two of them.

There truly was no reason why someone from his gaming life would want to hurt him. Yet that’s what it was beginning to look like as the team processed the evidence. The killer had unplugged everything after Rojas was murdered. The Livestream went down and the computer was wiped of any information. Rojas’s body was also moved to the bathroom where it was staged. His killer had put a bear mask over his face and covered him in glitter. Rojas was made to appear as it if he had come out of the “Killing with Kindness 3” game.

The game was all bears turning on each other. It was supposed to be about alliances and what have you and the game was a big deal. It has plenty of fans and even Rojas loved to play. He would usually play with one user known as Florida C.O.W. The two of them appeared to be friends. They were always playing together and they talked on the night Rojas was murdered. In real life, his friend was a retired Naval Officer who needed something to do. He met Rojas on a naval site and Rojas convinced him to take a chance on video games.

The guy was lonely because he lost his wife. Which meant video games gave him an outlet and he had Rojas to thank for that. The two became friends and so the team didn’t suspect Florida of hurting Rojas. They had to look for someone else. They considered who might have had a grudge and they came across Dirtybird. He was a gamer earning more than Rojas and then Rojas reported for harassing women online. Dirtybird lost his sponsorship. He was now short of almost a hundred grand and so he could have blamed Rojas for it.

Only the team had no idea how to contact Dirtybird. He covered up his real life and the team had no way of identifying him. The only way they could reach him was by posing as another gamer. This was typically where McGee came in and surprisingly McGee couldn’t do it. He didn’t have a high enough score to be considered a serious gamer. The team was going to have to find someone else and so that’s when Gibbs said he has a guy. His “guy” was nine-years-old Phineas. His mom was out of town and Gibbs was watching him for her.

Gibbs technically promised he would cut down on Phineas’s screen time. So, he quickly broke that promise and so he had a few moments to do whatever he wanted. He got Phineas to lure in Dirtybird. Then McGee traced the signal and they found Dirtybird. He was brought in for questioning, but he, unfortunately, has an alibi. The misogynistic troll was coaching his daughter’s basketball team at the time of Rojas’s murder and therefore he was innocent. He wasn’t their killer. The team was suddenly left without suspects and to make things worse Gibbs got in trouble with Phineas’s mother.

Phineas’s mom Sarah had quickly ended their boys’ trip once she realized Gibbs hadn’t followed a single rule of hers. He endangered her child even if said child thought it was fun and couldn’t wait to do it again. Phineas had loved hanging out at NCIS. He considered Gibbs a friend and so it was going to hurt both of them now that they can’t see each other anymore. Sarah had put her foot down. She didn’t want Phineas with Gibbs if she couldn’t trust the man and so their fishing expedition into Dirtybird had hurt Gibbs more than helped.

With the team back at square one, they looked into who else could have wanted Rojas dead. Rojas spent his last death on earth playing video games and talking to his friend Florida. Florida had even told him that the retirement home had glitchy WiFi. It turns out Rojas had wanted to help his friend with that. He looked into the home’s computer system and that’s how he found out someone was stealing information from the elderly. Someone was robbing them all blind and Rojas was onto him. And so before Rojas could report the guy to the cops, he was killed.

The killer was an old dude by the name of Elmer. Elmer pretended to have memory issues and really he was using that to hide his criminal behavior. He was stealing from his neighbors because he no longer had the money to stay at the fancy retirement village. And so the team arrested Elmer and they later found the murder weapon hidden in his garage.

Elmer was going away and luckily Sarah came around. She realized Gibbs was good for Phineas and that’s why she was going to allow them to be friends again. It seems they both needed friendship.