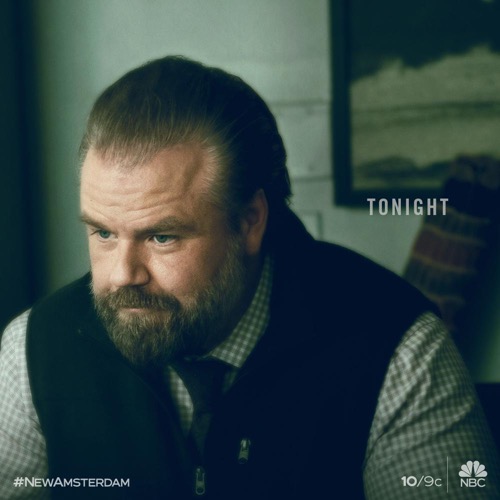 Tonight on NBC New Amsterdam airs with an all-new Tuesday, October 22, 2019, season 2 episode 5 called, “The Karman Line,” and we have your New Amsterdam recap below. On tonight’s New Amsterdam season 2 episode 5 as per the NBC synopsis, “When Sharpe has a case that hits close to home, she and Max team up to make things right for the patient. Meanwhile, Iggy and Bloom are forced to make a tough call on a unique situation.”

Vijay asks Lauren if she is okay after meditating for a while, making her confess that she has replaced pills with sex so she is not even making decisions she is simply doing things. She thought she was distracting herself from the pain and being sober. She feels enough is enough and it is time to face reality, and need to make choices that are good for her like going to an NA meeting. Kapoor is surprised she got all that from one meditation session; leaving him more frustrated than ever since he didn’t get any resolution for his issues with Ella and her pregnancy.

Max returns to Anil’s office, claiming he is there to only apologize and to find out where his boss’ office is. He goes to see Frances Meyer, explaining Jasmine and Paz’s situation; questioning her on why they won’t cover surrogacy but they will cover a uterus transplant which costs ten times the amount of money. He promises if they don’t reverse their policy he is going to recommend that all his patients get uterine transplants instead of surrogacy at the cost of Barcroft. She says they will simply stop covering uterine transplants starting right now. Max returns to Anil’s office, asking who Frances’ boss is.

Floyd informs Mackenzie that she does have a heart condition, but has a solution that is non-surgical. She is furious as NASA has run hundreds of tests on her and how come they didn’t catch this. He says this could be the first time, and a catheter could fix it but it might happen again. She just wants to get back to Houston and training. Floyd tells her the attack she had today was only a few seconds but a serious one could last a few minutes, maybe even hours and instead of losing control of her bladder she could lose control of her body and consciousness; if this happens in space the entire mission could be compromised with her risking the lives of her crew. He advises her not to walk out and feels after the procedure he doesn’t see any reason why she would be grounded.

Paz receives more bad news from Helen, who informs her that her tumor has stopped responding to treatment and she needs to have a full hysterectomy. She cries, saying that means she will never have a baby. Her sister tries to comfort her, promising they will find a way. She always dreamed of having a child, feeling it is old fashioned but Helen says that is feeling human.

Iggy plays a game with Juliette, saying if she completes it he will give her 80 bucks, 58 of which will earn her an hour of playing on the phone. Her first task is to apologize to her brother and she refuses. He knows that she may not feel sorry nor ever feel sorry but hurting him was a big deal. A big apology means a big reward, so she suggests a small apology gives her a small reward. She spots something on his desk that he proudly says one of his kids made for him. She tells him it is extremely ugly, asking if his kid is stupid. She says she is sorry, lays out her hand, telling him that was a small apology so he has to give her 10 bucks. She makes fun of him, keeps apologizing and taking more money. He tries to explain the rules again but then says he is not playing. She spits in his face but ends up getting all 50 bucks as he wipes off the spit, extremely angry as she gloats that she won the game!

Vijay goes to see Ella at the cafe, admitting he was trying to fight his instinct all day, but asks for a cup of coffee. He doesn’t want to discuss her personal matters, nor pry. He tells her he will from now on go to the other coffee shop so he doesn’t give her any unsolicited advice. Lauren comes to her PT room, booking with Dr. Parsons; getting away from her therapist she continues to have sex with.

Mackenzie is in her procedure when Floyd finds a problem, saying she needs surgery; but she is worried it will ground her. He reminds her that so will a fragile heart. She talks about being young and sneaking out when she was young, looking up at the stars and she knew one day she would be up there with them. She tears up, wishing she would really get there. Floyd doesn’t like it, but he will put two catheters in, but she needs to allow him to do a stress test after. It could put her into cardiac arrest and kill her, but she is positive it won’t. Floyd finds Jonathan, wondering how he could be with someone who loves space more than him. He admits she loves him more than anything on earth and would not ask her to remain earthbound, destroying her dreams. He explains that loving the carbon line means loving her more than that, even if it means her leaving him to be on the other side of it.

Max closes the door, talking to Helen. He thought a face to face with the insurance company would help, but they said no. Helen feels it is so unfair as IVF gave her so much hope. Helen reveals after the accident, everything seemed so fragile so she went and made it happen, but the minute she did it she knew she made a mistake. She wants to be a mom but she realized she didn’t want to do it alone. Max says they cannot let Paz lose this.

Iggy sits with Juliette, saying she kicked his butt good but isn’t sure if she is going to win the next level. She is great at making people lose, but that is not how winning works on the expert level. At that level, you have to win without ever letting the other person feel they have lost. If she makes them angry or upset, she loses; but if she wins, she gets Calvin’s phone and the game starts right now.

Mackenzie is given adrenaline to make her heart feel like it is racing; something like when they launch. If they can achieve this with her heart staying at 95, she will be able to fly. They begin the test, but her heart quickly races over 200 and suddenly there is a flat beep. She is lying in the chair and up in the stars. She reaches for the stars only for Floyd to call her back. Jonathan grabs her hand as Floyd congratulates her as she passed.

Juliette comes to Calvin’s room, saying hi to her dad. She apologizes to Calvin for wanting to take his stupid phone and really sorry. He tells her it is okay, asking if she can play with his phone, but he tells her that he is not done with it. She looks at Iggy and the worker, saying she apologized. She pulls out the money, demanding he trades it for the money but he still refuses. Iggy stops the worker and nurse from removing her. She pauses and looks around the room, telling Calvin she doesn’t know why she gets so angry, confessing she cares about everyone and the only reason she wanted his phone is because she plays the same games as him and hates that she is different than him. He thought she hated him, but she says that isn’t true. He hands her the phone and she walks out of the room, only to mouth to Iggy, “I won!”

The worker walks with Iggy, who says that it was completely terrifying. He feels it was progressing as everyone works on a reward system. He hopes that she can always work on an expert level she can learn to cope, but there will always be something missing inside her, but Iggy feels they can have it for her.

Max calls several companies about surrogacy, all of whom are not covering it. Anil walks into his office, admitting he wanted to be a doctor once; doing a year of med school; spending the last 10 years doing the exact opposite of helping people, until today. He gives Max a piece of paper, saying any trustee in the company can override a policy claim without changing the policy itself. He didn’t find anyone to do it, but he found someone to make an exception for Paz Aquino, so her sister can get the IVF. Max hugs him as Anil says he spoke to someone at the top, face to face.

Paz and Jasmine happily hug each other, excited for the future. Lauren arrives at an NA meeting where she runs is able to smile at a handsome man. Evie talks to Floyd, admitting how much she loves her job, making him ask how much time she needs to finish things out there. She says 6 weeks and he tells her he will see her in 6 weeks, understanding how important this is to her.

Ella comes to see Vijay, confessing if she does want to talk to someone in the future, she would like to talk to him. Before she leaves, he tells her whatever she decides they will always be family. The two hug each other tightly.

Max is stopped by Helen, who wants to celebrate Paz and Jasmine’s victory, but he has Luna and says they already ordered bottler service so they are good. Luna laughs at Helen, causing Max to say they need to show Mommy that laugh. He quickly corrects himself but Helen says he does not need to explain. Helen looks visibly concerned when Max leaves.