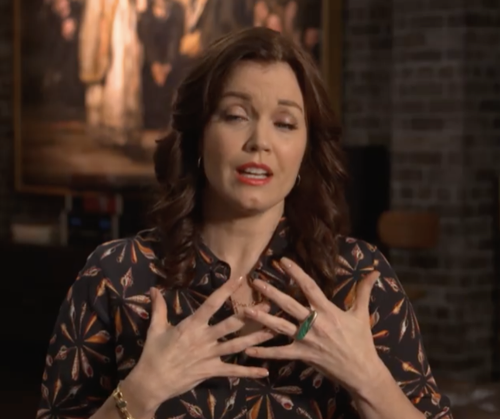 Tonight on FOX their new crime franchise Prodigal Son airs with an all-new Monday, October 14, 2019, episode and we have your Prodigal Son recap below.  On tonight’s Prodigal Son season 1 episode 4 called, “Designer Complicity,” as per the FOX synopsis, “Malcolm realizes his father’s killing spree may not have been a surprise to everyone in his family.

While Malcolm continues to investigate his past, the murder of a famous model and social media influencer sends him, Gil, Dani and JT on the hunt for a stalker with a creepy eye for design.”

Malcolm is in therapy talking about his mother. She knew about the girl in the box. A dream triggered this all and now he is obsessed and needs to know if his mother really knew. He freaks out. His therapist tells him they might change his meds. He gets a call and leaves.

Malcolm arrives at the scene of the murder of a model. She is dead in a tub with blue paint on her body and gold sequins. Her name is Tatiana and she is well known. Her boyfriend Axel, also famous, sits outside yelling that he wants to see her. Gil and Malcolm come out to see him. Malcolm accuses Axel of knowing more. Axel goes rigid and talks about how TT was stalked by several people before he takes off with his assistant. He needs a lawyer.

Malcolm comes home to see his mother. She has talked her ex into taking him off the list to visit, telling Malcolm seeing his dad is unhealthy. He gets angry and confronts her, asking her if she knew his dad was a serial killer. And why would she go to visit him after 20 years? She must be hiding something? She slaps him before leaving. She doesn’t know how she became a monster. Malcolm heads right to see his father who also won’t tell him the answer.

Back at work, Malcolm learns that Axel wasn’t around when TT was murdered, ruling him out. Malcolm heads to a makeshift memorial for the start outside her home when he sees a person of interest, a male with a camera. He follows him with a co-worker. Malcolm manipulates him into heading to the station to answer some questions.

At the station, Malcolm learns the man’s name is Roger, he was stalking TT. After some questions, Malcolm rules him out. But thinks he is hiding something and particularly about Axel. Gil comes in to tell them TT died of strangulation. Meanwhile, Jessica has a flashback of the time she begged Martin to stop all of his nonsense.

Later that night, Malcolm finds Roger on the street to ask him about TT. He doesn’t want to answer any questions and takes off. He gets hit by a car driving right at him. Malcolm calls into Gil to tell him before heading to the hospital.

At the hospital, Malcolm finds out Roger is stable. He then finds Roger on the gurney and tells him he heard otherwise, he needs to go to emergency surgery. He gets Roger to tell him about how Axel hit TT last week before handing him a tape.

Ainsley visits her mother who is beside herself. Jessica tells her how she and Malcolm had a fight. She has been drinking. Ainsley thinks she and Malcolm are both spiraling and all because of Martin. Jessica is sick of talking about Martin.

Back at the station, Malcolm has thought and runs with it – it’s Axel who has a stalker that killed TT. They know he is at a launch party of sorts tonight. Gil tells Malcolm he needs to stay back and not go there but Malcolm can’t help it. He goes and tells Axel about his possible stalker. It has to be someone close to him. Axel’s bodyguard arrives by his side. Axel leaves. The bodyguard threatens Malcolm before they are surrounded by Gil and the team. They got their man.

Malcolm and Gil share a drink and talk about his life lately. Malcolm tells him he needs to know the truth about his mother. Gil finally comes through, changing his mind and handing him an evidence tape.

Malcolm watches the tape of Jessica denying that she knew anything. In the interrogation, she only expresses worry for her son before she says she knew. For the last few months, she picked up on cheap perfume, his late nights. She thought he was having an affair not killing people. She let him get away with this. She enabled him. She cries. Malcolm tears up watching her get upset, getting upset at herself.