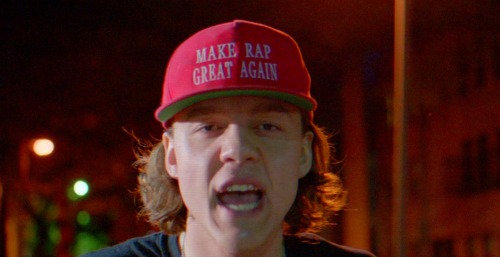 A rapper by the name of Billa B is defending his parents after they were arrested over the college admissions cheating scam. The New York City-based rapper, whose real name is Malcolm Abbott, told reporters that “everyone has a right to go to college.” His parents, Gregory and Marcia Abbott, have been charged with conspiracy to commit mail fraud and honest service mail fraud along with Hollywood actresses Lori Loughlin and Felicity Huffman and about 50 other parents.

Billa B reportedly smoked a blunt while giving reporters his take on the scandal outside of his Fifth Avenue apartment this past week. He admitted that while his parents tried to get him and his sister to continue their education, he decided not to go to college. Instead, he’s been busy working on his rap career and promoting his latest album.

His father Gregory Abbott is the founder and chairman of the food and beverage distributor company, International Dispensing Corp. The Abbots paid Key Worldwide Foundation and Edge College & Career Network William Rick Singer $125,000 to have a proctor correct their teenage daughter’s answers on her ACT exam.

According to People Magazine, Billa B said, “They are blowing this whole thing out of proportion. I believe everyone has a right to go to college, man.”

Malcolm’s brother also told The New York Post that his parents simply “got roped into [this by] some guy who f—— cheated them.” Malcolm, meanwhile, promoted his album to the reporters standing outside his apartment by saying, “Check out my CD, Cheese and Crackers.” The album features a song titled “If I Lost My Money.”

Just last week federal court reports revealed the names of 50 people who have been indicted in one of the biggest college bribery scandals to make headlines. The scam includes some of the biggest elite college and universities, including Yale, Georgetown, and the University of Southern California.

Many of the parents, including Loughlin and Huffman, either bribed college admission recruiters by pretending that their children were athlete recruits or cheating on their SAT exams.

In the meantime, don’t forget to check back with CDL for all the latest news and updates on your favorite celebrities right here.