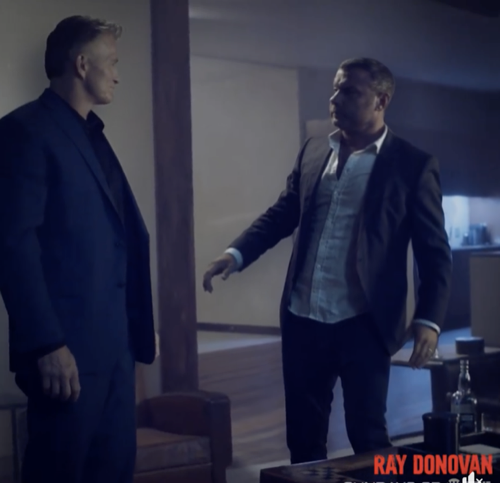 Tonight on Showtime Emmy Award-winning drama Ray Donovan airs with an all-new Sunday, January 13, 2019, episode and we have your Ray Donovan recap down below.  On tonight’s Ray Donovan season 6 episode 12 called,  “The Dead,” as per the Showtime synopsis, “Ray settles his scores and revisits the past with his father.”

Tonight’s Ray Donovan season 6 episode 11 is going to be exciting.  So be sure to bookmark this spot and come back from 9 PM – 10 PM ET for our Ray Donovan recap.  While you wait for our recap make sure to head over and check out all our Ray Donovan news, recap, spoilers & more!

Ray Donovan begins at Sandy’s (Sandy Martin) house, where Mickey (Jon Voight), Daryll (Pooch Hall) are busy disposing of the bodies and blood. Sandy asks Smitty (Graham Rogers) if he is going to “move his ass” any time soon. Bridget (Kerris Dorsey) is busy making sandwiches, as Smitty goes outside and is told to help Sandy in the garage, she has a chainsaw and cuts the heads off. Smitty vomits as Bridget seems calm and delivers sandwiches to everyone. Sandy complains about her arthritis and thinks Smitty would take over, but Bridget takes over; freaking Smitty out. Mickey tells him to make himself useful and clean the bloody bathroom.

Ray (Liev Schreiber) stands on the stairs outside his apartment and calls Mickey, asking him if he loved Ray’s mother and why he let her die alone? Mick tells him that she had every one of them, especially Ray, whom she thought was special; talking about how she thought he should be “Mr. Straight A’s”. Mickey says he would recite a book she read to him, the same book that got her to fall in love with him and how he would recite them to help Ray fall asleep; but Ray calls him a liar, upset that his dad was never there.

In the morning, Ray sits at the empty funeral parlor before driving off. Lena (Katherine Moennig) goes to the funeral home as soon as he leaves. Meanwhile, Bunchy (Dash Mihok) tries to get some sleep in his cell. Terry (Eddie Marsan) walks into Sandy’s house and demands to know what is going on when he sees Smitty cleaning up all the blood.

Outside, he sees Daryll and Mickey filling up the hole in the backyard, learning they killed 3 cops – the ones who took Bridget. Terry had no idea and quickly goes to see Bridget inside the garage. He sees Bridget and Sandy bagging body parts and tells Mick he needs to come with him as the FBI picked Bunchy up and if Mick turns himself in, they will go easy on him. Mickey reminds him that if he does go in, both him and Bunchy will go down. Terry says he made the deal and Mickey promises if it comes down to that, they will do it. Terry helps with the shoveling.

Sam (Susan Sarandon) watches as Ed Ferretti (Zach Grenier) and Judge Scholl (Delaney Williams) are on the news, saying her expose was all fiction and for her own gain. Judge Scholl asks everyone to get out to vote as New York needs Ed. Anita (Lola Glaudini) feels confident over the campaign and looks forward to tonight. Ray calls Sam, informing her that he is downstairs and they need to talk; she says she will send Vinny (Chance Kelly).

Mickey talks to Smitty about Bridget being strong like her mother, and if he wants to be with a woman like that he needs to toughen up. Mickey and Daryll head out of the area. Vinny arrives in the parking garage and escorts him to Sam’s place; saying, “It’s supposed to snow tonight!” When the elevator arrives at Sam’s, Vinny is dead on the floor. Sam quickly apologizes for the recording and for what happened to Bridget. She walks up to him, reminding him they have both done horrible things but she is going to trust him again and she wants him to trust her. She touches his face, saying he looks so tired as everyone wants something from him and asks what he wants.

Bridget finds Smitty, who has picked out a dress. He tells her to take a shower and put on the dress as today they are going to the Justice of the Peace and getting married. She says they need a witness and agrees. Ray returns to his car, sits for a moment before removing his gloves. He phones his psychiatrist but only gets his voicemail and hangs up.

Bridget comes downstairs and finds her Uncle Terry watching TV; he holds her hand asking if the cops hurt her, and she reveals they only hit her. Terry says she should be smoking pot and going to concerts; not burying bodies, Bridget denies that saying her mother would be doing the exact same thing. Smitty walks in as they both tell him, he needs to get cleaned up and put on a suit.

Ray tells Lena to check her phone, as there is an address but won’t explain anymore. He exits his car and opens his trunk as Mickey and Daryll are busy dumping the body parts. Mickey tells Daryll that his mother was the love of his life, but Daryll wanted him to be his father; he actually wanted Mickey to be his dad.

Mickey calls Ray, who admits he already knew the feds picked up Bunchy and Terry made a deal of Mickey for Bunchy; Ray tells him not to do anything until he calls him. Ray closes his trunk as Daryll and Mickey throw the last two bags into the water and immediately leave the area.

There are several couples waiting to get married, they are number 86 and Smitty goes to deal with it. Terry suggests Bridget should call Ray, but she refuses. Smitty returns saying the office is on number 84 and leaves to go get some water. Terry demands to know what is wrong with Bridget and she reveals that Ray tried to kill himself, shocking Terry. She tells him that a few months ago, Ray jumped off a building into the river and the cop from Staten Island is the one who saved his life. Their conversation is interrupted when Bridget and Smitty’s number is called.

Ray comes to see Ed Ferretti, where they frisk him, but he knocks out the one guard, stealing his gun and locks the doors to the bowling alley. Ed tells everyone to stop this, asking Ray if he is out of his mind. Ed admits he f**kd up, but he certainly had nothing to do with Bridget, that was all Rad. He also reveals it was Sam who released the tape, selling him out. Ed talks about his family is the same, as he will fight and die to keep them safe, wondering what will happen if he pulls the trigger; asking if Ray wants the headlines and if his daughter would want that. Ed tells him he needs to keep his family safe, get his brother out of prison; saying if Ray works with him, Ed will work with him!

Bridget and Smitty walk out arm in arm, as they also hug Terry for being their witness. Mickey washes the garage out at Sandy’s place while Daryll finishes laying the sod. Ray watches Anita Novak’s campaign office, where he attempts to shove the media away when they confront him about making the recording against EdFerrettii and Gregory Scholl. Anita is furious with him, but he reveals everything was Sam’s idea and he never had a conversation with the current mayor.

Lena arrives at the riverside, brings out a huge rope where she finds Vinny. He asks her to help him out with his hands, but when he claims not to know who she is, she wraps a noose around his neck. He realizes she is Lena and he screams out her name as she jumps out the window with the rope in her hand, snapping his neck. She casually walks back to her car.

Ed calls Ray, saying Ms. Novak just conceded and says he needs a good man like Ray; but Ray feels there is nothing good about him. Ed says he sells himself short and shouldn’t consider himself a thug and work for someone who only thinks of him that way; Ray hangs up.

Smitty and Bridget return with Terry to find Mickey, Daryll and Sandy sleeping. Terry says one thing is for sure, they will never forget their anniversary. Bunchy is released as Ray hugs him tight and begins to cry. Sandy continues with her sarcastic jokes and then everyone begins to sing, except for Mickey with Terry even getting up to dance.

Mickey shouts that he put food on the table, after their mother got sick. He is furious that people believe they can protect their kids from anything hurting them, but cancer is one of those things you can’t stop. Terry says he is drunk as Mickey walks away, insisting he was there enough. Bridget sings a beautiful love song to Smitty, Daryll winks at him and everyone leaves them alone. Terry sits alone on the porch.

Ray asks Bunchy if Mick ever read to them as kids, but Bunchy is more concerned about why he is asking that and tells him that he doesn’t know and if he did, he doesn’t remember much about being a kid. Terry gets emotional when he sees Bunchy and holds him tight, telling him to go right in as they will be right there. Terry tells Ray if he sticks around, he will stick around and the next time he feels like doing himself in; he better call the person who loves him more than anyone else in the world.

Ray follows Terry into the house, where everyone is drinking and celebrating. Mickey learns that Ray couldn’t get them both out and Mickey says it was James Joyce, the story he used to tell them when they were kids and he knew it by heart. He tells Terry that Ray said he wasn’t there when their mom got sick and walks away, saying he was fkn there. Mickey watches him for a few moments while Sandy talks about Andi, and suddenly Terry is confused, believing it was Ray that took the girl upstairs but then remembers it was him.

Mickey returns, extremely drunk and begins to recite the book he would read to the boys. Ray looks at his father as they all fall silent, listening to Mickey; everyone solemn as Mickey again tells them he was friggin there! Ray walks outside, takes out his phone and calls his psychiatrist, who knows Ray called him several times. Ray stands in the rain and begins to talk, saying he doesn’t know where to start and the doctor says they can start with the fact that he had to courage to call him, suggesting he sit with that. Ray is told he would like to talk together again, in person, booking to see him on Monday at 3pm. It begins to snow outside, just like what Mickey recited.

Ed celebrates his victory as the re-elected mayor as Anita walks away after smoking a cigarette outside her campaign office; walking in the snow. Lena returns to the funeral home with bad rope burns on her hands after killing Vinny. Sam is hanging by a noose in her own apartment as Ray just stares up at the snow falling on his face, he smiles as he sees his whole family inside celebrating.