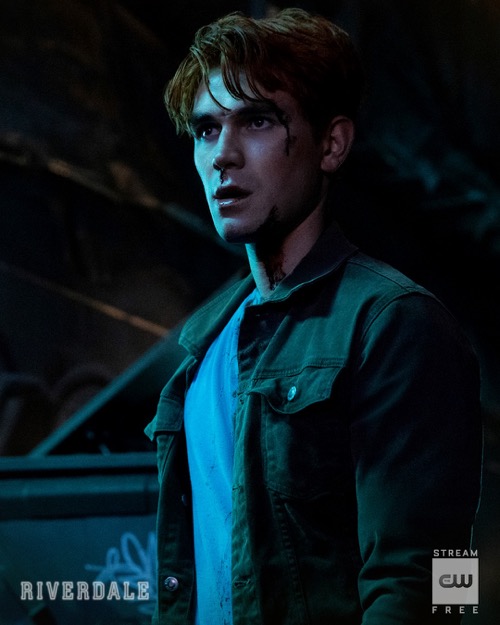 Tonight on CW their drama Riverdale airs with an all-new Wednesday, December 11, 2019, season 4 episode 9 called, “Chapter Sixty-Six: Tangerine,” and we have your Riverdale recap below. On tonight’s Riverdale season 4 episode 9 Fall Finale as per the CW synopsis, “After declaring war on Hiram, Veronica enlists a secret weapon against her father – her Abuelita. Archie and FP team up to take Dodger down for good, while Betty and Charles investigate a series of strange attacks aimed at Betty.

Elsewhere, Jughead’s search for his grandpa, Forsythe Pendleton Jones I, leads to more questions than answers, while Cheryl finally makes peace with the past that’s been haunting her”

Betty received her next mystery. Her sister Polly had some kind of break at Shady Grove Hospital and she attacked a nurse. A nurse named Betty. Polly had mutilated this nurse and afterwards she refused to talk to anyone. She said the only person she was willing to talk to was her sister Betty. Betty however had to be warned about Polly’s mental state. There was a recording of the attack and it was up to Betty whether or not she wanted to see her sister afterwards. And Betty ultimately decided to see her sister.

Polly was restrained. She’s been in a lockdown of sorts since her attack on the nurse and so there was no real danger to Betty. Betty therefore had the chance to ask her sister why. She asked Polly why she attacked that nurse and Polly claims not to know anything about it. She said she has no memory of this attack. She last remembered getting a phone call and that was it until she woke up tied to the bed. Polly asked her sister to help her and surprisingly Betty believed her story. She thinks something happened on that phone call.

No sooner did she tell her mother about it that Alice answered the phone. She didn’t reveal who it is that called and if anything its like she entered a fugue state because she tried attacking Betty after that phone call. Luckily, Betty was able to snap her out of it. Betty then realized that whoever called Polly had tried to get at her using their mother and so she reported it to Charles. Charles later traced the call back to Shankshaw Prison. He didn’t know anyone there that would harm his family. Betty on the other hand had her suspicions.

Betty believed that someone from the Farm had hypnotize their mother and sister. She said Edgar was capable of it and, without him, there were still his followers left to deal with. Betty suspected his was his sidekick Evelyn. Evelyn was a student of Edgar’s and she want revenge against Betty. Betty had every reason to believe Evelyn was reaching out from prison. She asked her brother to look into it for her and he was doing that as well as helping Jughead locate their grandfather. Jughead wanted to find Forsythe Jones the First because he still has questions about the Baxter Brothers Series.

Jughead believes their father was the original writer of the series. He thinks the story was stolen from his grandfather by his current teacher and he wanted to prove it. Jughead has been thinking about it a lot lately since he won the competition to ghost write the next Baxter Brothers story. He didn’t want to write it until he got the truth. So, he turned to Charles and Charles found Forsythe. Forsythe was an old bitter man. He thought Jughead had found him because of FP and so Jughead quickly cleared things up.

Jughead told him he came because he wanted to prove DuPont stole the Baxter Brothers Series from him. Except Dupont didn’t steal a thing. Forsythe dropped out of Stonewall because he was burnt out and he had needed money. He sold the one story he had to DuPont for five thousand dollars. The story was now worth millions and Forsythe was admittedly bitter about it. He also knew that DuPont didn’t steal a thing. He sold the rights to the story and it was Dupont that turned it into what it was.

All along Jughead had believed DuPont was some nefarious character in a book. It turns out he simply saw a good thing and capitalize on it. DuPont has nothing to fear from the truth coming out. He also wouldn’t have killed to cover up the story because if he was that type then he would have killed Forsythe first and so Jughead was wrong about his teacher. He was seemingly wrong about quite a few things. Jughead was masking his peace with it when he returned to campus and so Charles did his part there.

Charles got Betty a meeting with Evelyn. It didn’t take long for the young woman to confess to being behind the phone calls and she had almost tried out the trigger word on Betty when Betty ran off. Betty had been afraid of being turned. She told Charles her fear and he said the only way to find out was to test it. He used the trigger word on her three times like Evelyn does and it did nothing. Maybe it was because she was already Betty that she couldn’t hurt herself. It didn’t really matter ether way because they proved the trigger couldn’t work on her and it put her mind at ease.

Betty was now free of her mystery. She could go on with her life and she tried to. She just couldn’t forget her ordeal in the end. She began to hallucinate. She saw a younger version of herself and in it she had killed a dog. Betty also thought her hands were covered in blood, but when she returned to herself, she saw how she had dug her fingernails in so deeply that she broke the skin. Her hands were really bleeding because she injured herself. Betty didn’t know if she was going crazy or if the hypnotism really did work for her.

Betty was so caught up in her own drama that she missed out on everyone else’s. FP and Archie had come together to protect the kids at the community center and FP was later shot because of it. It was just a graze, so he was fine. He just had to stay in the hospital overnight and Archie was so angry about it that he confronted Dodger. He got Dodger to agree to a fist fight where they dueled almost to their deaths. Only Archie didn’t kill Dodger when he had the chance. He left a passed out Dodger in his mother’s care and he warned Darla that if she or her family ever came back that he would killer all of them.

Now, that didn’t sound like the typical Archie. Its like he became someone else in a fight and it was unfortunate that the kids from the community center witnessed this other side to him. Veronica, though, wasn’t there. She was at her speakeasy because the building was about to lose their liquor license and she wanted to celebrate how many hours they had left. Veronica as it happens had also been caught out. She had been seen by a college administrator from Columbia and so her chances at the college was nearly over because of her father. He was the one that called the administrator.

Anyways, both Veronica and Archie handled their crisis on their own. They didn’t even turn to each other for help and that’ saying something. They usually always turned to the gang for assistance. What made this current predicament any different? Archie later went to go see FP at the hospital because he had needed someone to talk to and he couldn’t go into the room because he saw FP was with Jughead. Jughead came to check on his dad. He also told his old man about meeting Forsythe and he thinks it will be good for his father to speak with his own father.

Jughead tried to reach out to Forsythe again. He wanted to see if his grandfather would be willing to visit FP in the hospital and sadly Forsythe had run away again. He ran off because that’s what he’s good for. Jughead now realizes and he apologized to his dad about getting involved. Jughead also said that he was going to sign the contract with DuPont. He was ready to put the past behind him and not long after he did he was invited into the secret society at Stonewall. He was now a part of the Quill And Skull.

Archie meanwhile had seen this father and son moment and all it did was remind him that his father was gone. He was just so angry. He didn’t know why he went after Dodger like that and it wasn’t until he was talking to his mother that he finally revealed how angry he was to see someone like Dodger walking around while his father was gone. Archie revealed all of this to his mother. He wasn’t ready to talk to his friends just yet and so he kept what happened to himself. He didn’t tell anyone else about Dodger when he went to a memorial that Cheryl set up.

Cheryl finally realized it was her mother that was “haunting” her. She took care of the evil woman and she realized that it was time to let go of her brother. Hence the memorial. Cheryl called her friends and she asked them to meet her by the river. It was the last place she had gotten to see her brother alive and she wanted to say goodbye to Jason there.