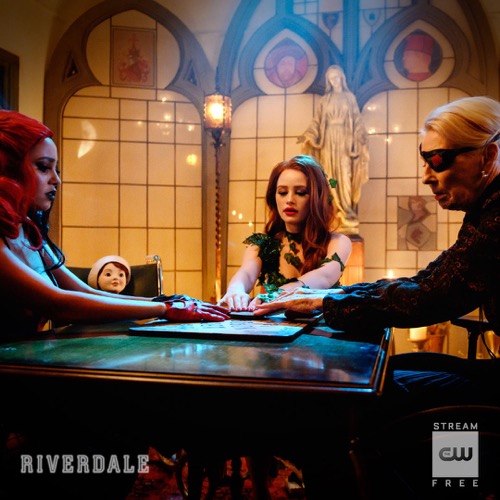 Tonight on CW their drama Riverdale airs with an all-new Wednesday, October 30, 2019, season 4 episode 4 called, “Chapter Sixty: Dog Day Afternoon,” and we have your Riverdale recap below. On tonight’s Riverdale season 4 episode 3 as per the CW synopsis, “Ominous videotapes appear on doorsteps across Riverdale. At Stonewall Prep, Jughead learns about a series of mysterious disappearances that have occurred to former students at the school. Meanwhile, Archie’s plan to create a safe space for the town’s kids gets derailed when some unwanted visitors crash their Halloween party.

Someone was messing with the people of Riverdale. It seems this man or woman was recording videos of people’s homes and then sending it to them. There was no message to go along with the video. There was just the video and the videos were creepy. No one knew what they meant. They didn’t know why the person responsible was sending them a seemingly harmless video or why this voyeur wanted them to know he’s watching. Unless it was merely to scare them.

Everyone was on edge afterward. Alice was interviewing people and she was happy of course because this was a huge story for her, but no one else was happy about it. They were all just too afraid. The people of Riverdale know what a psycho looks like because they practically saw them all now and so they knew this person was bound to escalate. And they all feared it would happen on Halloween.

Then there were what kids in the poorer neighborhoods were experiencing. They had heard about a gang that was mugged and unfortunately, this gang wanted payback. They couldn’t exactly afford to lose face. They needed to appear threatening and strong and so they threated to cause havoc on Halloween night. Archie and his crew had heard about it and it was Veronica that came up with the wise idea of throwing a party for the kids at the community center.

It gave the kids someplace to stay safe that night. Archie and his friends even got Halloween costumes from a certain new CW show that was namechecked. Only the gang later showed up at the community center. They went there looking for their worker bees and demanded they all go back to selling drugs. They didn’t know Archie would stand up to them until he did. He said that the kids were safe there and that the gang had to leave because they were on private property.

Mad Dog also threw in a dig about how they got their butts beat the other day that is before he added the part about how he could always beat them up again. The gang eventually left and the kids were now safe even if no one else was. Betty, for example, was receiving mysterious phone calls from someone claiming to be her father. They said they were and yet they disguised their voice. Betty then tried to push back.

Betty said she saw her father die. This is true so there was no way this voice or the person behind it could be her father and so that’s when the voice said she saw what he wanted her to see. Either way, they scared Betty. She told Jellybean to lock the door behind her. She also answered the front door with a bat and so she nearly bludgeoned her brother. Charles said he was stopping by to make sure everything was okay and instead he ran into a frantic Betty.

Betty told him everything. They also started to talk about what he wanted from the whole Alice thing and he said that he always wanted to be a part of a family. He admitted that it was bound to take time. He also said that he was willing to work towards it and so no sooner did they reach this accord that the prank caller called Betty back. This time Charles was tracing the call. Betty kept the person on the phone long enough to trace it and then she hung up.

It turns out the phone call was coming from Shady Grove Treatment Facility. Its where Polly was being deprogrammed and so they both thought it was their sister. Betty had Charles call the facility pretending to be Edgar and Polly was so happy that Betty relished telling her that Edgar was dead. Then Betty said Polly was dead to her now because of what she did by impersonating their dad. So, Betty wasn’t really listening to Polly when she said it wasn’t her.

Betty ignored her sister. She hung up on her too and then started watching videos with Charles as they talked about the videos. Charles suggested that she sign up for the FBI training program because he needed someone that knew this town to be his eyes and ears. The two even bonded over this possibly fake program, so they were getting close even as she stopped wondering where Jughead.

Jughead was supposed to come home for Halloween. He ended up spending the whole night locked inside a coffin and his classmates swear it was a prank welcoming him to the school, but Brett looked differently. He really wanted Jughead gone and he possibly using this “prank” to scare Jughead off. But Jughead has lived through the worst. He wasn’t going to let Brett win. Not like Moose was doing. Moose was looking into the military and the young man was doing his best to run from his past. And he was gone by time Jughead returned to their room.

Speaking of running, though, Veronica accidentally let a serial killer into Pops. He pretended to be a trucker who drove all night to go see his family and he convinced Veronica to take pity on him. She let him into the diner and she even fed him. Then she heard on the news how this guy broke out of the treatment facility. She fought the killer off and she may also have killed him. It was a little unclear about that part.

Veronica and Archie talked to him about it and he said he was proud of her, but that could be because of anything. She did come up with the idea for him to be a superhero and he was thinking of wearing a mask as he cleans up the streets for today’s youth. And so he could have thought she was a genius because of that.

And while Betty was upset with her sister, it was Charles who was listening in on her conversations.