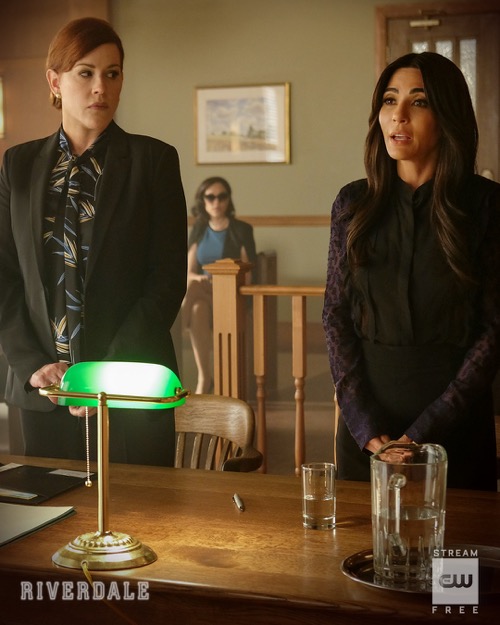 Tonight on CW their drama Riverdale airs with an all-new Wednesday, November 6, 2019, season 4 episode 5 called, “Chapter Sixty-Two: Witness for the Prosecution,” and we have your Riverdale recap below. On tonight’s Riverdale season 4 episode 5 as per the CW synopsis, “Caught between Hiram and Hermoine’s double trial, Veronica grapples with what the future holds for her family.

Archie finds himself the unexpected target of the town’s local businesses. Betty and Kevin join the Junior FBI Training Program, and Jughead learns some surprising information about his family history.”

Tonight on Riverdale, Veronica visits her mother in jail to discuss her trial, they plan to leave her father locked up and free her mother, during trial it’s revealed Hermoine owns the cabin where tall boy was shot, they are worried of the prosecutor continues to dig it’ll be harder for Hermoine to be freed they come up with a plan to get Governor Dooley to pardon her.

Pop is served to testify for Hiram knowing that Pops won’t lie on the stand about who fixed the books, Hiram tells Veronica to confess she framed him by handing over the books to the feds Veronica refuses, she tells her lawyer she’ll take the stand and testify that she asked Pops to fix the books due to her fathers extortion.

At Stonewall prep Jughead is introduced to some of his famous book writer Baxter Brothers line of books he collected as a kid, he learns there is a competition to select a new writer to carry on the tradition of writing the books. It turns out one of the old writers knew Jughead’s grandfather.

Archie is seen patrolling the neighborhood against people from Dodgers crew trying to steal rims off a car, he puts a mask on to scare them away and Toby pulls a gun on him which he manages to take away and tell him to go away. He makes a new rule to the kids saying if they run with Dodgers crew they can’t come to the halfway house anymore.

Veronica blackmails the governor into pardoning her mother, during the trial, Hermoine pleads guilty and is pardoned right after. Veronica is approached by Hiram’s secret daughter Hermosa, who he had come up from Miami to help him get out of jail, he hired Hermosa to big Veronica’s place and record conversations she had with the prosecutor to help free Hiram and they drop the charges against Hiram and he is free and announces his candidacy for mayor of Riverdale.

Betty continues to find similarities between her and serial killers. Betty tells Kevin her childhood strong of when she killed her cat Caramel after her father asked her to, he reassures her that it wasn’t her fault but her fathers. Kevin decides they should not go back to Charles’s class. Betty tells Charles she wants to quit the program and he admits to her that he has the serial killer genes as well and joined the FBI to surprise the urges to kill and convinces her to stay to harness her skills like he has , instead of quitting. Betty feels Charles is keeping secrets from her and decides to stay in the class to uncover what he is hiding and why he still is in Riverdale.

Bret and Jughead continue to go at each other with each one thinking they are better writers than the other,he tells Jughead he is a statistic and project and only here because the board had to let in a low-income kid into the school and Jughead loses his temper and begins to attack him with a stapler but stops himself before he hits Bret. Jughead wants to leave Stonewall prep but FP talks him out of it and tells him to bring honor to their name and be better than his great grandfather. Jughead decides to stay at Stonewall prep and joins the completion to become the next ghostwriter

Archie holds a neighborhood press conference on his community center after FP tells him people are starting to complain about the troubled teens there, one business owner admits they pay Dodger for protection against being robbed or having their property burned down and now are being pressured by Dodger to complain against Archies center, because he wants the center shut down. Archie confronts Dodger in his mask and declares war and tells Dodger to leave town and Dodger refuses to leave.

In the closing scene, FP is seen coming to arrest Betty, Archie, and Veronica for the murder of Jughead.