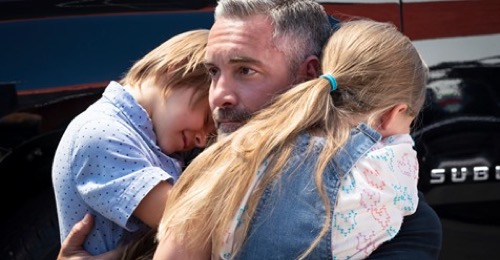 Tonight on CBS their new show S.W.A.T. inspired by the television series and feature film airs with an all-new Wednesday, October 23, 2019, episode and we have your S.W.A.T. recap below. On tonight’s S.W.A.T. season 3 episode 4 called “Immunity” as per the CBS synopsis, “Deacon’s family gets caught in the crosshairs of a drug cartel when he and the SWAT team aim to bring down its leader, a former foreign rebel force leader running drugs in plain sight via a local flower market.

Also, Hondo receives troubling news regarding his father, and Tan is forced to go before an internal review board due to his girlfriend’s indiscretion.”

Its morning, Victor tells Bonnie he slept like a baby after coming in late last night. She notices the candy from her friends has been eaten. She tells him she knows why he let so well – pot gummies. He gets upset, telling her how he gets drug tested. He needs to report this right away.

Hondo and his dad work on the car with Sean. Hondo notices that his dad can’t stop coughing.

Deacon and his family walk through a flower market when suddenly men on street bikes come flying in, shooting up the place. People are running, screaming and crying. Deacon manages to take down one and call into dispatch for help.

The team shows up and assess the area. It looks like the guys are trained and had a motive for hitting the flower market. Meanwhile, the man Deacon managed to capture is being interrogated. He isn’t saying much. The team gets to work, researching the street bikes, the guy’s tattoos and more. Deacon recognizes one guy from security footage of the scene.

They head to the flower market and start asking around. Deacon asks one guy to identify the man in the photo. He tells them the man is from a drug cartel and makes them sell drugs with their flowers from Columbia. Some of the sellers were talking about going to the police. The shoot up was a warning to them. Hondo tracks down the man in the photo. He and Deacon bring him in. But once at the station, they are told by a higher-up to release the man.

Esprit and the guys state their case that the guy Murido is responsible for killing people. But his handler at the CIA isn’t willing to listen. Murido brings them good intelligence.

Darryl visits Hondo and tells him about his dad coughing up blood. Meanwhile, Vic is asked to bring Bonnie in to confirm that she was the one with the edibles. After, Vic tells Bonnie what she does reflects on him and vice versa.

Hondo and the guys get more intel on Murido. Esprit tells them to go for it and not to tell the Lieutenant. They hit the road and arrive outside a warehouse. They drive the SWAT truck right through the door of the warehouse and bust Murido with bricks of cocaine.

Esprit catches some heat from the Lieutenant. She tells him he was warned not to go after Murido. He tells her he was targeting the warehouse.

Hondo visits his dad and asks him about his coughing and the blood he is expelling. He doesn’t want to talk about it. Hondo wants to know if this is why he came back.

Deacon and Annie lay in bed. He is worried about the kids. Lila comes in and asks if she can sleep with them. They say yes. Annie sees something outside. Sudden the windows are being shot out. Two guys on street bikes outside shoot up Deacon’s home while he tries to keep everyone on the floor.

Deacon and the entire family head to the station for safety. Deacon goes to the CIA handler who is smug about the shoot up. Esprit takes the handler behind closed doors.

Esprit comes out a short time later. He has learned the identity of the guy at customs who allows Murido’s shipments through. They are going to get him and flip him and shut Murido down for good.

Victor learns he is clear to get back to work just in time for their mission. He and Bonnie talk and get on the same page. They both want to make it work.

The team takes out Murido and his guys. Deacon gets to zip tie his wrists together with a smile. Back at the precinct, Esprit and the Lieutenant tell the CIA handler he is done with Murido who will be sent back to Columbia.

Deacon heads home to see his family and make them feel safe.