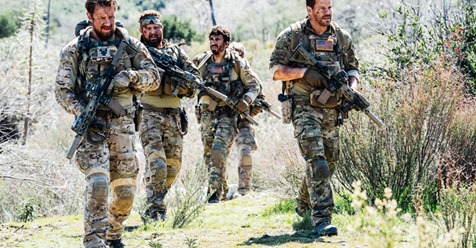 Tonight on CBS their military drama Seal Team airs with an all-new Wednesday, May 8, 2019, episode and we have your Seal Team recap below. On tonight’s Seal Team season 2 episode 21, “My Life for Yours,” as per the CBS synopsis, “Bravo Team desperately searches for Ray after he gets separated from them while in enemy territory.”

Jason radios to Ray but he isn’t responding. Sonny starts to panic. Blackburn radios that they believe Ray is on the east side of the mountain. Jason knows the enemy is there and he is alone. Blackburn tells them they need to continue on their mission. Ray is most likely going to meet them at the exfil point. Jason has his own doubts but tells the team they need to push on.

Meanwhile, Ray is hanging from a tree on the other side of the mountain. His chute is stuck in the trees. He tries to radio to the group. He hears voices on the ground. He reaches for his gun. The men stop walking below him. They don’t see him yet. When they look up Ray shoots them both.

The sun has come up. The team walks. Sonny rattles on about Ray and how he is alone. Jason tells him Ray is his friend but they have a job to do. Meanwhile, Ray is out of the tree and on foot running. Jason continues to try and radio to him. Mandy radios the team that a parachute has been discovered. Jason wants to go and get Ray. Blackburn warns them that they can but no-one is going to save them if they get into trouble. Jason understands. Blackburn gets gear from his co-commanding lieutenant.

Ray encounters the enemy on the mountain. He takes him out. Stella shows up at Clay’s. They came to check on him. She notices someone has been staying there. Clay tells her it is a long story. She has time to hear it.

Jason and the team stop to talk and look at the map. It doesn’t look like Ray is going to make exfil. Sonny apologizes for getting out of line. Jason admits he did the same with Ray in recent weeks.

Mandy and Blackburn talk. She’ll get her man, but they need to get Ray. Mandy works to appease their co-members of the mission.

Stella and Clay talk. He tells her about Brett. They start to talk about their relationship. Stella thinks she broke up with him too soon. She should have let him get on the plane and didn’t say anything.

As the seals continue to walk through the mountains one of the seals stops dead in his tracks. He is pretty sure he is on a landmine. Meanwhile, Ray attempts to flee from several men when he rolls down the hill and hits his head.

Jason and the teamwork to trick the landmine. The enemy pulls up. The manage to all gets down after fixing the line. Sonny keeps his finger on the trigger. The men move on after failing to see them.

Ray comes to on the ground, coughing. He can hear men nearby yelling. He runs and finds a little village. He heads to a small hut. Inside he looks for water. A woman comes in. He stops her from screaming, warning her that he will kill her.

Blackburn radios to Jason. They have Ray’s coordinates. They head there. Sonny thinks they won’t make it in time. Jason has an idea. Moments later they are all on horseback.

Ray talks to the woman. He is stressed and doesn’t know what to do next. Months ago he would have entered the village and taken his chances. Now he doesn’t believe there is a bigger plan.

Jason and the team get to the site where Ray is supposed to be. They find his helmet and nothing more.

Clay meets with his dad after talking to Stella. He tells him about Brett. He wants his dad’s help in getting the military to recognize TBI. His dad thinks its an admirable cause but it isn’t going to happen.

Ray is unsure about what to do. The woman starts to pray. Ray gets angry. The team starts to run. They need to find him.

Ray realizes he cannot kill the woman. He lets her go and then runs. He takes out several enemies on his way. He stops on a hillside and kneels. He thinks its over for him. Men below come closer. Jason yells from above to get down. Ray lays still. The team takes out the enemy and grabs Ray. He and Jason hug. He thought he was going to die. They rush to make exfil and get to safety.