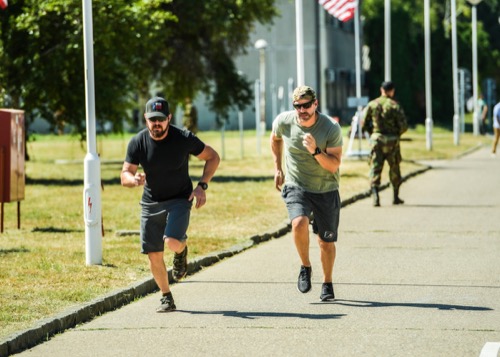 Tonight on CBS their new military drama Seal Team airs with an all-new Wednesday, November 20, 2019, episode and we have your Seal Team recap below. On tonight’s Seal Team season 3 episode 7, “The Ones You Can’t See,” as per the CBS synopsis, “The Bravo Team is on a mission abroad to help the secret service prevent a sniper attack on U.S. dignitaries. Jason contemplates surgery for an injury.”

Jason and Sunny are trying to get in a workout when Jason falls to the ground in pain, holding his leg.

Clay arrives at the ambassador’s funeral. He meets an old employee of Nicole’s, Rebecca. She guesses right away that Clay is military. Clay can only share that Nicole died a hero.

At the bar, Ray and Sonny have a quiet squabble over Sonny’s attitude and Davis. Ray doesn’t like seeing him this way.

Jason limps into PT to see the physiologist new to the Seals. He finds her annoying but he is desperate. She tells him he cannot go on any mission to Paris like he is planning and should get an MRI.

Jason reluctantly takes her advice. Ray will fill in for him. They tell their superiors. Jason watches the team leave.

The team talks about Jason not being with them while they eat and play games. Jason sits in the MRI tube with images and situations rushing back from his past; his daughter crying, Alana, a fight in a bar. When he gets out to talk to his doctor, he is told his injury may not be repairable.

The team arrives in Paris and are shown to their Parisian counterparts. They will be working to guard a security summit that may be attacked.

Jason meets with his superior who tells him it may be time to hang things up as Bravo 1. Jason is determined to get his hip fixed and return to duty.

Clay and Trent stake out a couple in a complex. Ray, Vic and a soldier from the Paris unit stake out another part of the building while they talk rules of a firefight and shooting from a far range.

Jason arrives to work at the command center. He sees Davis. She tells him he would make a great Ops Chief. Shortly after talking to an old team leader, Jason grows more and more irritable; positive that he never wants to ride a desk and needs his team. He leaves and goes home to build a bookshelf. He puts pictures up of fellow soldiers before hearing all of the voices from the day tell him he may have to hang it up. He smashes all the photos before demolishing the bookshelf.

It is the day of the summit. Ray and the others sit at the top of a building above the area of the summit while Sonny works the ground. Sonny sees a man who looks suspect. He has a mind reader. When Sonny approaches, he runs. Sonny gets his man, chasing him before punching him once. He drops.

Jason asks Mandy out for a drink. He tells her he just needs to hang with a friend. He tells her about his surgery before asking her to go on a road trip. He is going to have some free time.

Ray and the team see another possible suspect who could be ready to fire at the summit patrons but they aren’t sure. Sonny heads to scope out the situation on foot. Ray gets eyes on a shooter and takes his shot. They get shots in return. Clay and Trent rush to another rooftop to try and take them out. Clay takes a killer shot while the shooter is also attacked by Cerberus, the Seal team’s dog.

Clay returns home to find a new pair of shoes from Rebecca. He calls her and asks her out.

Jason shows up for surgery. The prep instructions and paperwork induces a panic attack. He leaves and heads home, sitting on the floor in the corner.