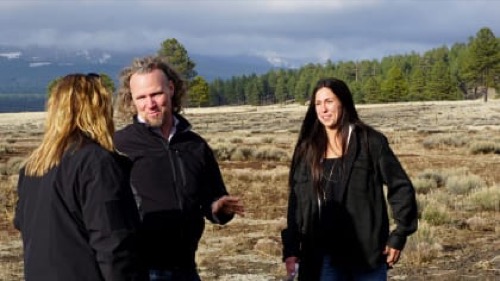 TLC’s reality show about a polygamist family Sister Wives returns tonight with an all-new Sunday, March 03, 2019, season 10 episode 6 called “Flagstaff Flirtations” and we have your weekly Sister Wives recap below. On tonight’s Sister Wives season 10 episode 5 as per the TLC synopsis, “Blocked from moving to Utah, Kody pitches Flagstaff, Ariz.; he takes Meri there to look at land and starts to tell the children, some of whom have meltdowns about moving.”

Kody called another gathering. He even asked some of his older children to attend this meeting because he wanted everyone’s opinion on moving. Kody had just taken Christine to see Flagstaff, Arizona and she admitted at the gathering that she had loved it there. She especially loved the area known as Coyote Pass. Coyote Pass has mountainous views and a small town feel to it. Both Christine and Robyn who loved the area had also checked out the high school and they thought the building was very beautiful. It had looked more like a visitor’s center than a school and well the kids’ last school had looked like a prison. Christine and Robyn were on board with moving because they believe their quality of life will be improved.

The other wives just hadn’t been as sure. Janelle had looked into schooling and she knows that in Arizona the kids could attend whatever school they wanted because they wouldn’t be tied by location. Which helped with her son Gabriel. Gabriel had looked at the available schools and he hadn’t minded this one place he saw. He actually put his foot down and said he wouldn’t move if he couldn’t go to that school, so his mother was trying to make it work out for him. Janelle’s children were her main priority with moving and she knew that they would have to experience more than a mere move. They’ll also have to deal with living apart from everyone as they waited a potential nine months to get their custom houses built.

Meri was worried about that time frame. She knew that it could be anywhere from nine months to two years before they’re all moved in. This means that the family has to rent until their homes are available and finding four houses together wasn’t going to be easy. Meri knew that the family could end up living apart again like when they had to leave Utah. When they left Utah, their rentals were all over the place and Kody was left having to live out of a bag. He couldn’t stay at one place for long because he spent most of that time on the road and that was a problem with his wives. None of his wives felt like they had enough time with him back then and Christine still makes that complaint despite them all living in a cul-de-sac.

Kody only got to take two of his wives to see Flagstaff and so he was planning on taking the other two when Christine jumped the gun. Christine wanted to speak with a realtor about selling her house and she told Kody that she just wanted a timeframe, but truthfully she had been so excited about moving to Coyote Pass that she brought up things Kody didn’t even know. Christine told Mona that she wanted to put her house on the market by early June and that she would move her family out the second they sold the house because she wanted them to get adjusted to Flagstaff. She wasn’t thinking about the whole family moving together and Kody was. He had been surprised by how quickly Christine was ready to move.

Christine had thought that the house could be on the market for months and it turns out that a house like hers could sell within a month. The realtor Mona had reeled Christine’s enthusiasm back in when she said that the house could sell fast because to make that sell happen they still had some work to do on the house. The house needed some repairs and paint jobs. It also needed to be put on sale with the others to get the best value because by then all the houses will have been updated and no movers will have to live through a renovation in the neighborhood. And so there was still a lot to do on Christine’s part, plus Kody still needed to show Flagstaff off to the other wives and the next one he’ll be taking it Meri.

Meri and Kody’s relationship was in an odd place. The old stuff hadn’t worked out for them because Kody now realizes that they failed to nurture their relationship and so he’s trying to find a create something new with Meri. Meri’s trip to Flagstaff was perhaps the most eventful. She got to see the place that Robyn and Christine loved and then she got to see the place that Kody loved. He wasn’t quite settled on Coyote Pass because he didn’t want to go back to a cul-de-sac. What Kody really wants is a big house where all of them could live together. It was what the family had before Kody married Robyn and Kody wanted the return to that. It’s just his wives that oppose it. The other three didn’t want to live in a big house and Meri didn’t want to enter a toxic environment if Kody pushes it.

Meri and Kody’s relationship was now almost platonic. They see each other as friends first and that could be why Kody took her to see this other neighborhood. This other place was called Cotton Wood. It was more woodsy and they didn’t have a view like Coyote Pass, but Kody loved it there and Meri had also enjoyed it. She liked the sense of peace she got there. It wasn’t like the angels singing that her two sister wives claimed they heard in Coyote Pass and so Meri had a different experience. She was more relaxed and she joked around with Kody. Kody noticed that she loved the place and he could see the difference in her when he later showed her Coyote Pass because all she could say was that she was freezing.

Kody got Meri to admit that she would choose Cotton Wood over Coyote Pass and he was the same. He wanted to know if he could change the others’ mind by bringing them to Cotton Wood because if he couldn’t then he would have to one place work by making sure Meri had her trees while Christine had her views. Both of which would be impossible at either location. Kody and Meri went back to Las Vegas where they had some unexpected news to share with the family. The family came together for another gathering and this time Kody brought up Cotton Wood. Cotton Wood was cheaper and it had blown two of their minds. And so there was now two for Coyote Pass and two for Cotton Wood.

It was a tie and unfortunately ,it made Janelle the tiebreaker. The family said she would have to see the two places to find the one she liked the most and Janelle was like “that’s too fussy”. Janelle said that either place would work for her. She simply wanted to get on with the move and settle there. Janelle was more concerned about the move itself and so that’s when Kody said that if didn’t work out in Flagstaff that they’ll come back to Las Vegas. When he said that, his wives were up in revolt. They didn’t want to keep moving around and Robyn was perhaps the most vocal when she said she wanted to set down her roots. She didn’t want to have to keep moving around. Robyn wanted to move them once and then stay there until they were all grey and old.

Kody came to regret what he said. He truly believes that if it fails to work out for them in Arizona that they could easily pick up and begin again in Las Vegas. So the only thing he actually regretted was saying that part out loud to his wives. They weren’t initially happy about the move and while they’ve since come around it has been begrudgingly. The wives wanted to get through one move and see where they go from there. Kody understood that and so he began focusing on Aspyn’s wedding. The bride had a few things she needed to figure out like what kind of cake she wanted and so she asked her family to help with the process. They later went cake tasting with Aspyn and they soon saw that despite saying she want their opinion – Aspyn she didn’t want it.

It was like her dress all over again. Aspyn was very opinionated and what she wanted was more or less what was going to happen. Her parents ended biting their tongues at the cake tasting and that’s why none of them got the flavor they wanted. They hadn’t even liked the hazelnut all that much and still got stuck with it because Aspyn wanted it. The family eventually got over the cake business and they went back to focusing on this move. With Janelle being blasé about it, Kody believed the next best thing is to take the case to see Flagstaff. He wanted them to see the school and the neighborhood they were considering. He also wanted the ones dragging their feet to become accustomed to Arizona.

The area they were considering even had different weather. It was windy there and they’ll have more rain as well as snow.

And so it does seem like the move is going ahead whether everybody likes it or not.