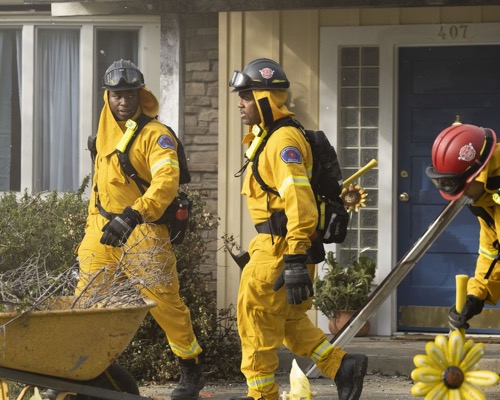 Tonight on ABC Station 19 returns with an all new Thursday, May 16, 2019, season 2 episode 17 called, “Into the Wildfires” and we have your Station 19 recap below.  On tonight’s Station 19 recap as per the ABC synopsis, “The members of Station 19 pack their gear and head to Los Angeles, California, to help battle a deadly wildfire raging out of control. While the team works to evacuate residents, they meet Terry (played by Patrick Duffy), and Ben makes a split-second decision that changes both of their lives.”

The firefighters were deployed to Los Angeles. The wildfire that hit LA has burned over fifty thousand acres and it was only ten percent contained. LA needed the backup and their neighboring states had been happy to help California before the fire became too much. Station 19 was just one of the many that were being sent there and they had to leave early next morning with no exceptions. This also meant they had to leave behind Montgomery. Montgomery got into a fight with another firefighter and it had been about Vic. Vic was the topic of gossip since her relationship with the late Ripley got out and the rumor mill was not taking it easy on her even if she did lose the love of her life, but Montgomery was her best friend for a reason. He got into a fight with fellow firefighter and unfortunately it landed him in jail.

Pruitt had to bail him out, but by then it was too late to get a ride with his team and so Pruitt spotted an opportunity. He also wanted to help out with the fire in LA and he knew how they could get a ride. Pruitt knew that Ryan was going to San Diego for tactical training and so he basically thanked Ryan for the free ride before Ryan could turn him down. The man ultimately had to take them to LA and the car ride was uncomfortable thanks to Montgomery. Montgomery needed someone to help after his attempts with Vic kept failing. He told the guys that it must be sad to say goodbye to each other after such a long time of being neighbors and the guys in question were fine. They said they already had their goodbyes when Pruitt moved and so Montgomery was making things uncomfortable.

The guys soon made it to LA and they didn’t run into anyone from Station 19. Their friends had been deployed to a neighborhood and it turns out their friend hadn’t been told much else. Station 19 went to the neighborhood where they ran into an elderly couple. The couple has seen plenty of bad fires in the past and they didn’t want to leave their house. The couple also wanted to help. They prepared their house for the fire and they were willing to prep their neighbors’ houses as well, but the wind did shift and the neighborhood was now under threat from the fire. It had caused the elderly woman to develop with her breathing and so the firefighters took her back to her house because they needed the house as a makeshift headquarters. Her husband had wanted to follow her and she convinced him to continue cleaning up after their neighbors.

The man went back outside to use his machine to clear the yard, but the machine broke down on him and so he tried to fix it. He put his hand near the still running machine and it got sucked in. His hand was now trapped and when he reached down to get it out his long ponytail also became trapped. The man began to lose blood and he lost consciousness as the firefighters were trying to free him. It made them panic and Ben told his friends that they had to cut off the man’s hand. He asked Dean and Vic if they agreed and they did. They voted to take his hand and were cutting it off when their captain showed. Captain Sullivan wanted to check on his team and he found them in the middle of cutting off someone’s hand. He asked Ben what the hell he was doing only it was too late to go back.

Ben had to go ahead. He removed the hand and they dragged the man back to his house where he was treated with pain meds, but both Terry and his wife Maria were upset about the hand. It didn’t matter that Terry woke up or that his life was threatened when the decision was made. He was upset about his hand because he’s always felt like he had to protect his wife and he didn’t think he could do that without a hand. Terry was feeling sorry for himself and so Vic told him not to give in. She’s been doing the exact same thing after Ripley died and giving into the darkness wasn’t going to help. She has to see through to the light now. Vic told him that he had to do the same and she hoped she helped him because they needed to focus on their survival now. The wind shifted again and it left nearly surrounded on all sides.

Station 19 didn’t know what to do. They thought they were going to die and then they heard from Pruitt. Pruitt said he could guide them out and he could because she’s been talking to Montgomery’s new friend Dylan. Dylan was deaf and so he communicated through text messages, but that didn’t hinder him from telling everyone that he knows a secret hiking path that was wide enough to fit the truck. He guided Pruitt and Pruitt guided Station 19 out of the fire. They found the secret path and they made it back to comms. They ran into everyone there and Andy got the chance to say goodbye to Ryan. Ryan was going to his training to San Diego and he also had his father’s secret stash in a bag. And so he wished Andy well.

Andy and Sullivan have bonded and they had a moment in the fire where they depended on each other, but things were back to normal when they got back to Seattle and Sullivan was still a stickler for the rules. He stopped something from happening with Andy and he even reported Ben for his actions in the field. Ben was going after a position in Medic One and they were concerned when they learned he amputate someone’s hand. They dug deeper into the background and they found out that he has a history of cowboy antics. So Ben might have lost out on his dream job and he wasn’t the only one with a bleak future. Montgomery was later rearrested because the man he hit was in the hospital with a coma and could die.

Also, Dean was finally ready to introduce his new girlfriend Nikki to Jack and Maya and it turns out Maya used to date Nikki. And so now things are both awkward and bleak!