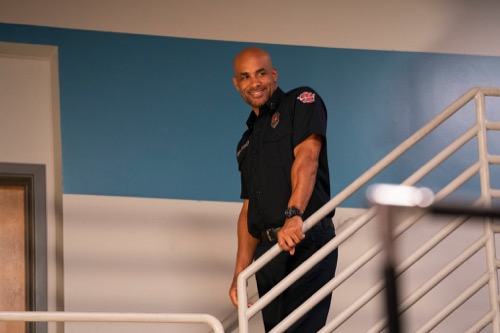 Tonight on ABC Station 19 returns with an all new Thursday, April 4, 2019, season 2 episode 12 called, “When It Rains, It Pours!” and we have your Station 19 recap below.  On tonight’s Station 19 recap as per the ABC synopsis, “While struggling to help victims of a crash on a desolate road, Vic finds the courage to confront a difficult situation; Ben prepares to go out for Medic One; Pruitt spends time with a special someone.”

Andy found out about her father’s girlfriend in the worst possible way. She went over to the house because she wanted to say her final goodbye before it was sold and as she was walking around she ran into her dad. He was in his underwear and his new girlfriend Reggie was in his firehouse shirt. The shirt was actually the only thing Reggie had on and so it was an awkward beginning for her and Andy. Andy got out of there as fast as she could and she went to work where all she was complain about how Reggie. How Reggie was her father shirt and how the woman even brought along a milk frother for their coffee. It was all so disgusting to Andy that’s he didn’t want to listen to reason or hear how her father deserved some happiness in his life.

Andy was miserable and it didn’t help that her own love life was a mess. She finally realized that she wanted to be more than just friends with benefits to Ryan and before she could have that conversation with him – she ran into him on a date with another woman. The other woman was named Jenny and she was pretty. Not prettier than Andy but pretty. Andy hated seeing her with Ryan and she couldn’t help going over how Ryan introduced her to Jenny as his friend. Andy was hoping to become more than a just a friend and so the arrival of this Jenny on the scene has sort of made things difficult for her. She was the one that was used to calling the shots in her relationship and finding a door closed in her face was an unfamiliar feeling.

Andy wasn’t only able to think warmly about Ryan again when she came across their measurements at the station. They used to be measured whenever they would come to visit her dad and so their heights were still there. It made Andy remember the good times and it stopped her from recalling her father. Pruitt had also been slightly scarred when Andy came over and saw him with his girlfriend. He thought that he should do something for her and he didn’t know what that was, but he tried asking Ryan and that’s when he learned that Ryan wasn’t just dating anyone. He was dating a woman from his station. Ryan sort of introduced Jenny to Pruitt and it had come as a nasty shock to the older man because he never envisioned Ryan dating anyone else besides Andy.

Andy was only calmed down because she talked to Captain Sullivan of all people. He was becoming a true friend and he could be very understanding. He did his best to be there for Andy and he even tried to be there for his old friend Ripley when Ripley came to him with his problems. Ripley was dating Vic and he was technically her superior which made their relationship was frowned upon. Not only was Ripley is a position of authority, but he took a personal interest in Station 19 after they dealt with the towering inferno and it would like he was hanging around or otherwise known as using his position to get private time with his girlfriend. This relationship could also blowback on Vic with any promotions she might have in the future.

This is why Ripley didn’t want Vic to mention their relationship to anyone they work with, but he told his sister about her and so she thought it was only fair to tell her best friend about him. Montgomery was told in the strictest confidence not to say anything and he didn’t know that he shouldn’t have talked to the man himself. Ripley had been surprised to learn that another firefighter knew their secret and so he has gotten so worried about getting into trouble over this relationship that he said some things he regretted to Vic. He might have said that maybe it was best that no one ever found out and that made him Vic feel like she was a dirty secret.

She got upset with him and walked away. And so he had hoped to talk to her afterward.Only the next time they saw each other she had sneezed on him. Ripley didn’t know that she had a cold or that she had been sent home from work, but when he talked about a secret relationship and began sneezing in front of Sullivan it wasn’t hard for the captain to make a guess about who Ripley was secretly dating. The was sneezing everywhere and people were bound to notice that only he and Vic were sick. It was basically “Sickgate” and it left Sullivan stumped. He didn’t know what to do for his friend or what to do about this situation because normally he might have offered to speak to the woman and he didn’t want a member of his station to feel like he was trying to silence her for an old friend. There was no easy solution to what had to be done and both men were talking about it when they heard the emergency call come in.

Vic had witnessed an accident on her way home. She came across a couple that was going so fast that they crashed and were both left injured. This couple had been racing to the hospital because the wife was in labor, but the accident stopped them reaching the hospital and it also pinned the wife in the car. She had needed someone to help her deliver her baby and lucky for her Vic had been there. Vic wore a face mask in order for the baby not to be contaminated by her own germs and she delivered the little girl. She also stayed with the mother until the firefighters came and cut the poor woman out of the car. The woman was able to join her daughter and her husband who was suffering from a concussion.

Vic also ran into Ripley again and, while she told him she was angry with him, it didn’t stop Ripley from taking care of her. She was developing the flu and needed someone to help her. So, Ripley stepped up to be that guy. He realized that he cares about her and he didn’t want anything to get in the way or for the keep to fighting. Ripley stayed by her side as she battled the flu and they were going to deal with the complications of their relationship another day.

Sullivan in the meantime helped Andy to see that she couldn’t go back to the way things were between her and Ryan, so she covered up their measurements on the wall.