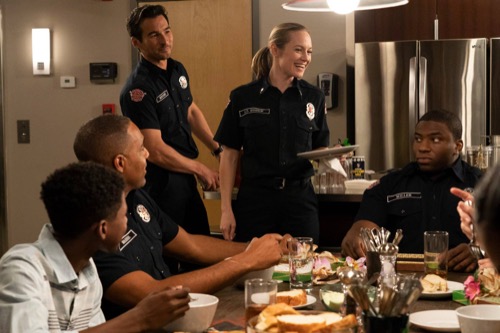 Tonight on ABC Station 19 returns with an all new Thursday, April 11, 2019, season 2 episode 13 called, “The Dark Night” and we have your Station 19 recap below.  On tonight’s Station 19 recap as per the ABC synopsis, “A blackout in Seattle creates dangerous situations throughout the city and the members of Station 19 head out on calls, including locating a missing girl and helping a man on life support where every second count.”

Tonight’s Station 19 season 2 episode 13 looks like it is going to be great and you won’t want to miss it.   While you’re waiting for our recap make sure to check out all our TV recaps, news, spoilers & more, right here!

It was a good thing Pruitt returned from vacation. Everyone had been happy to see him and to get their presents, but they were really happy to find out that he remembered the manual for the generator. The generator was going in and out all the time. The city was undergoing a blackout and the backup generator that they had wasn’t doing its job. Everyone knew it was going to fail sooner or later and so they needed someone around that knew how to fix it. Pruitt stepped up when they needed him to and the rest left the generator to him while responded to a call. The received an emergency call about a little girl going missing. She was playing hide and seek with her older brother when the blackout caused her whole building to lose power.

Little Penny had asthma and the blackout might have agitated it. The whole squad went into the building looking for her and they brought along their unexpected guests, Kat. Kat was still going through training and she sort of becoming a protégé of Andy’s. Andy was the one to ask their captain if they could bring her along and he agreed as long as it was only observational, but that rule was ignored when they needed an extra pair of eyes to look for Penny. Penny was known to name around the building. The neighbors all complained about how she was getting in the way and how her family shouldn’t have granted her so much freedom. There was this one guy that kept telling them that they should get the lights back on and that wasn’t their job.

The lights were up to the electric company. The guy knew that and he even said that the other people told him that as well. The firefighters had split up to check floors and so Andy didn’t know who he was talking about until she ran into Ryan. Ryan and his new girlfriend/ search partner Jenna had also been assigned to look for this little girl. With both police officers and firefighters in the building, it had been Jack to agree that they should pair off one officer with one firefighter and so that’s how Andy was paired with Jenna. Jenna wasn’t a bad person and she was concerned about the little girl. That’s where their focus was and so they asked people they ran into if they had seen her. And someone that Penny loved hanging out in the basement.

This person could have mentioned this before, but they were too busy watching movies on their laptop and so Andy and Jenna decided to ignore them because the little girl was more important. They went down to the basement and it wasn’t long before they found her in the dryer. Penny had gone in there to hide and unfortunately, she became stuck. She couldn’t open the door from her side and the others couldn’t open the door from theirs. They needed power tools and so Andy called it in. She wanted someone to show up with the tools she needed because Penny was running out of oxygen and therefore Andy was going to do everything she could. Even if she found out that she shouldn’t be turning on a power tool because the whole building was suffering a large gas leak.

The gas was all over the building and everyone was in danger. Someone set it off as well and it was either some candles or a jerk lighting a cigarette even after he was warned about a gas leak. Captain Sullivan wanted the whole building evacuated and he had everyone removed. He couldn’t convince Andy to leave and he wasn’t going to. He stayed behind with her and they used the power tools to free Penny. Penny lost consciousness by then and they had needed to do CPR, but they revived her and she was back to threatening her big brother in no time. Their parents were going to meet them at the hospital and so Andy was glad of the job she did. She, however, go into work the next morning expecting to be yelled for endangering the rookie.

Kat had to be shouted at to leave, but she was still a rookie that they brought into a building with a gas leak and so Andy apology for it to her captain. Only Sullivan wasn’t upset. He said that rookies needed more hands-on experience and so he didn’t want Andy to regret mentoring the young woman. It was best that Kat understands the risks that go with the job and Sullivan wasn’t just saying that because he and Andy were friends now. Both of them had been glad to call each other friends and as they got to talking it seemed like there was a spark between them. It turns out being friends doesn’t stop some lighthearted flirting and at least it was innocent. It wasn’t like Maya and Jack who started seeing each other and have yet to bring it up to Andy who one of them’s a best friend and the other’s ex-girlfriend.