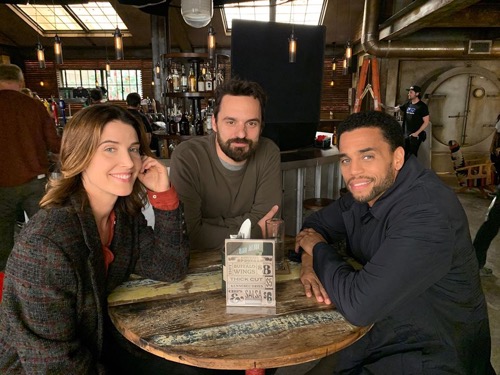 Tonight on ABC their drama Stumptown based on the graphic novel airs with an all-new Wednesday, December 11, 2019, season 1 episode 9 called, “Dex Education,” and we have your Stumptown recap below. On tonight’s Stumptown season 1 episode 9 as per the ABC synopsis, “Dex goes undercover as a substitute teacher to find out who planted drugs on a friend’s daughter. Meanwhile, Dex and Liz’s relationship gets too close for comfort.”

Dex slept with Liz. She didn’t mean to. She thought they were just going to have fun out on the town and then one too many drinks resulted in them sleeping together or at least that’s what they thought had happen. They woke up in bed together. They could simply have slept near each other because they don’t really remember what happened and so they later decided to stick to that. They weren’t going to tell anyone about waking up in bed together. They both agreed that nothing happened and they downplayed their “Girls Night Out” with Grey.

Grey later asked him how it went. He asked them if they had fun and they said they enjoyed themselves. Liz also said she missed his calls because she had been at home asleep. Liz and Dex tried to lie to him, but the truth soon came out by the way of Ansel. Ansel knew about the sleepover. He couldn’t exactly keep the sleepover to himself and so Grey found out about it after a long a day. It wasn’t a long day for him. It was a long one for Dex. Dex got a new case you see. She was hired by a woman she went to school with and this woman wanted helping proving her daughter was set up. T

The daughter, Jennifer, had found a felony-weight of drugs on her one day. She didn’t know why it was there and so she brought to the principle where she was later arrested. It turns out someone had reported Jennifer was a drug dealer to the cops. The cops now believe Jennifer turned in the drugs in the hopes of escaping charges and so they charged her anyways. It was therefore up to Dex to prov this young woman had been set up. Dex did that by going in undercover at the school. The school was unfortunately one of the snooty types and so the whole thing was an ordeal for Dex.

First, she was a substitute teacher. She had to deal with overprivileged kids with weird names and that had been a headache. Then they sought out the teenager that Jennifer’s family thought was behind it all. Alyssa had gotten Jennifer’s place in volleyball and that meant she can now receive all the scholarship offers that would have went to Jennifer. There was just problem. Alyssa wasn’t there that day when someone at the school reported Jennifer as a drug dealer and so she couldn’t have done it.

Dex also spoke with the volleyball coach. MJ was the first person that said she thought Jennifer could be a drug dealer and she said that Jennifer may have done it to get friends. She wasn’t really popular. She didn’t have a group or anything and keg parties didn’t do it anymore. The teenagers nowadays want more. Jennifer probably thought if she came with drugs that she would finally gain friends and so Dex decided to ask Jennifer’s mother. Again, they went to school together. They were admittedly enemies back then and they were different now because they were adults.

They could both see how jealous they were of each other back then. They now realized they could have been friends if they had only talked and so Dex asked Penny if Jennifer had ever mentioned drugs at the school. The answer to that was “yes”. Jennifer told her mother that she thought one of her friends had come in high and that she though some of the kids at her school were taking drugs to keep up. Dex then followed that lead with Hoffman. He looked into the kids at school and he found out one of them has been using her mother’s prescription pad while the woman was out of town.

Dex finally thought they were getting somewhere when the ball dropped with Grey. He confronted her in the bar about what happened between her and Liz and she tried to explain herself. It didn’t mean much to Grey because Liz had told him another story. Liz told him that she got on the Dex train and got carried away. Liz put all the blame on Dex. Dex therefore was left holding the bag. She tried to tell Grey that she didn’t mean for anything to happen and he cut her off. He didn’t want to hear her excuses.

Grey told her that she needed to find another bar. He didn’t want her working out of his anymore and so Dex was in trouble. She may have ended her friendship with Grey as well as ruin things with Hoffman. He had overheard the conversation and, while he pretended he wasn’t bothered, he was. He now regrets not talking about exclusivity with her. Hoffman also told her they needed to focus on the case and so they went after Rebecca Braylander. She was the teenager selling drugs. She wrote in on her mother’s stolen prescription pad and used it when her mother left town.

Dex planted a listening bug in Rebecca’s car. The cops later overheard Rebecca talking to her coach MJ about how she thinks the cops are onto her and how it was MJ’s fault. So they arrested Rebecca. Rebecca lawyered up pretty quickly but she ultimately revealed that it was her coach who was the drug dealer at her school. It turns out the coach was worried that Jennifer could report the drug use and so she told Rebecca to supply with drugs outside of her regular source because she didn’t want the drugs to lead back to her.

They then planted those drugs on Jennifer in the hopes of getting rid of her. Only Jennifer’s family fought back and they hired Dex. Dex’s involvement is what changed everything. She found out about Rebecca and Rebecca led to the coach. The same coach that tried to paint Jennifer as an unstable loner. It turns out the cool coach was a horrible person taking advantage of a bunch of kids. The coach eventually arrested after trying to make a run for it and so the case was over with. Dex was now free to repair the damage she caused.

Dex went back to the casino where she got footage of Liz dumping her drink into Dex’s cup. She thinks that pushes some of the blame back onto Liz and yet Hoffman didn’t want to hear it. Hoffman said they should keep things professional between them from now on and he ended things. Grey at least had confronted Liz and that’s when Liz revealed that she did set up Dex. She thought Dex was getting in the way of her relationship with Grey, so she framed Dex and Grey broke up with her because of it.

Liz still had plenty to say. She told him that he cares more about Dex than he should and maybe she was right.

Grey tried calling Dex to apologize, but she wasn’t answering her phone, so Grey drove to her place and he was too late.

She was already talking to Hoffman who felt they should discuss what happened.