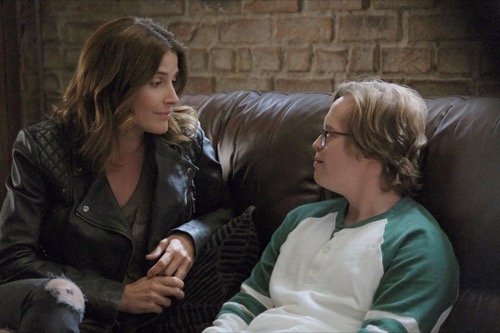 Tonight on ABC their drama Stumptown based on the graphic novel airs with an all-new Wednesday, November 6, 2019, season 1 episode 6 called, “Dex, Drugs and Rock & Roll,” and we have your Stumptown recap below. On tonight’s Stumptown season 1 episode 6 as per the ABC synopsis, “When Dex’s ex Fiona, a famous musician, comes into town for a performance, Dex must protect her from a stalker. Meanwhile, Grey continues to receive the cold shoulder from Dex, and Tookie and Lieutenant Cosgrove develop a new friendship.”

Tonight on Stumptown Dex takes Mikes to a club to let him get a glimpse into her world. The performer is Fiona X who is an old flame of Dex and dedicated star performance to Dex.

Back at home Miles questions, Dex about her relationship with Fiona and Dex says it was ten years ago and only lasted 5 months. Miles feels Dex is sending mixed signals and goes to Lee and asks for her advice and she tells him to come direct about his feelings for Dex and tell her how he feels.

Grey and Dex try to put the list behind them but Dex states it’ll be hard since she feels everything about Grey was a lie.

Fiona comes to Dex and asks her to help her because she feels she is being stalked, her manger tho doesn’t feel the same and says Fiona is just paranoid and making up stories. Even tho Fiona has bodyguards she wants someone she can trust to help her and Dex agrees.

Tookie has his truck inspected and fails, so he has to shut down until he passes, he goes to Cosgrove to ask her to help him get an extension she can open back up and she does, he gifts her with a mole dish as a thank you.

During a performance Fiona points out a suspicious man who they think is the stalker and Dex pursues him and tackles him down to the floor and the man states he was just trying to get a selfie. Her manager tells Dex not to tackle anyone else. After the show, Dex and Fiona head back to the hotel room where they revisit their past and get touchy-feely but then interrupted by room service who delivers a picture of Fiona in the same hotel room with the words “you are safe” under a heart drawn around Fiona Dex then believed her claims.

Grey and a woman named Liz take interest in each other which upsets Ansel. As he sees this he purposely drops a beer bottle to get Grey’s attention.

Dex brings Fiona to the precinct and asks Mike to help them with the case, as he is questioning Fiona she takes more interest in asking about Miles and Dex’s relationship but he remains focused. Fiona tells Miles to be careful with a woman like Dex.

Dex thinks Fiona should change her hotel room but she refuses to say the stalker will just find her again. Mikes get a lead after going through Fiona’s social media, on a man named Martin who they think is the stalker and in his room, they find a shrine dedicated to Fiona, but the suspect flees before police can detain him.

While Dex and Fiona are out the stalker tries to attack Dex saying Fiona wanted him to protect her as they exchanged letters. Mikes brings Fiona into question her about the exchange of letters between her and her stalker Martin she says she doesn’t remember, Dex and Mikes begin to think it was her manager Nick was behind them. Nick gets arrested for being behind the stalking as he wanted to control Fiona through fear. Fiona asks Dex to come on tour with her but she turns it down. Dex and Miles go on a bowling date and they bond some more.

While Liz and Grey are beginning to get to know each other at the bar Ansel drops some more beer bottles on the floor to interrupt the two. The two notice the pattern as well. Liz spends the night at Grey and Ansel sees her and is upset as he asks why she is there and storms off. Ansel locks himself in a room and Grey calls Dex to come down. When Dex arrives her and Grey begin to argue in front of Ansel and he tells them to stop and asks if Grey is leaving and they reassure Ansel that everything is fine. When Dex leaves Grey tells Ansel that him the dropping of silverware was a bit much.

Cosgrove and Tookie begin to bond over food. Liz and Grey discuss what’s happened and she feels Dex doesn’t like her he reassures her that Dex will come around.