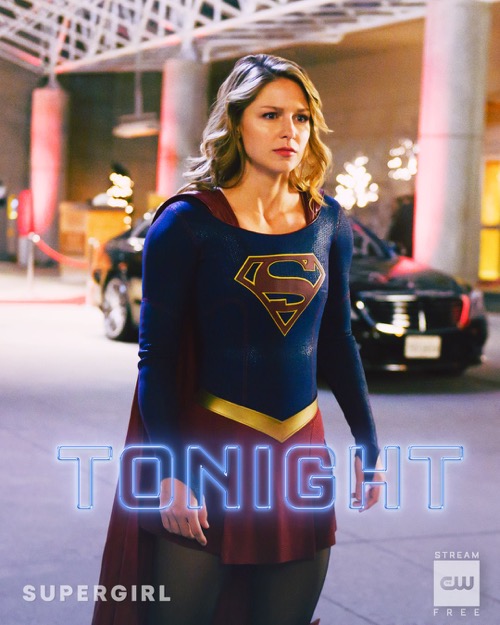 Tonight on the CW the series Supergirl airs with an all-new Sunday, February 17, 2019, season 4 episode 12 and we have your Supergirl recap below. On tonight’s episode called, “Menagerie” as per the CW synopsis, “With his P.I. shingle newly hung outside his office, J’onn welcomes new clients. Trying to take her mind off what happened at the DEO, Kara decides to team up with J’onn on his latest assignment, which unfortunately ends up tying directly into Alex’s current investigation that involves the villain Menagerie. Meanwhile, Lena shares some news with James, but his reaction isn’t what she expected.”

A pair of con artists who have been robbing people are on a drive. They talk about going to a Valentine’s Day Masquerade Party when their car goes off the road in the dark. The woman sees a very strange scene with snakes.

Kara and Alex go to visit Martian at his place. They sit and talk. Kara wants to go with Alex to a Valentine’s Day party tonight. After Alex leaves to head to work, Kara tells Martian she misses being her partner in crime.

A woman comes to visit Martian at his office. She thinks her husband was kidnapped. Brainy visits Nia. He apologizes for her mother’s passing. He wants to get to work on her powers and training to help Super Girl. She tells him she needs more time to mourn. He heads to leave. Nia asks him if he wants to go to a Valentine’s Day party. He accepts.

Alex arrives on the scene where a person’s heart has been extracted from their chest. Back at the lab, Alex and Brainy look over the body. Haley shows up. There have been two more bodies discovered with the same injuries. Brainy thinks he knows what did it. He shows them a snake.

Martian meets up with Kara to ask her if she can help him with a new case. Meanwhile, Jimmy brings Lena a Valentine’s Day gift. She thinks they should take off for a spontaneous romantic holiday.

Brainy tells Alex about his date with Nia. Alex thinks he needs to bring her a gift. They get back to the case. Brainy noticed that all of the jewelry at the home of all of the victims has been stolen. Meanwhile, Kara and Martian talk about his client. Kara thinks he is having an affair.

Martian and Kara arrive at the client’s home. The door is open. They find the husband unconscious on the floor. Kara gets closer. His heart is missing. Alex and her team show up with guns drawn.

Kara and Martian offer to help Alex with her investigation. Kara secretly uses her x-ray vision to bring them to a safe in the house. Alex calls Brainy for help. He is at Nia’s party and feeling uncomfortable. All three of them head there to see Brainy.

A teen named George visits a man named Ben in prison. He tells Ben about the Children of Liberty out searching. Ben tells him to be brave and strong.

Alex runs into an old love interest. Kara tells her to go and have a drink with her while she heads to talk to Nia who is upset about her mom. Kara gives her a pep talk. Later, at the party, Brainy tells the gang about a new victim who has yet to be reported. They all head to her house. When they arrive they don’t find Pamela, but the woman con artist who attacks Alex and then Kara before taking off.

Jimmy and Lena head to the airport to go to Paris when he shares that he will never support her sharing her researching with the government. They end up in a dispute. Jimmy gets out of the car and leaves.

At the Valentine’s Day Masquerade Ball, the con woman shows up ready to wreak havoc. She releases several snakes. Kara turns into Super Girl and sweeps her out the window and away from the party. Snakes attack Super Girl. Nia shows up to help, freeing Super Girl who tells her to fly off and help Alex. After she leaves, Super Girl fights the con woman for a second before the Children of Liberty rush in and kill the con woman. Haley arrives with the team.

Back at home, Alex arrives to see Kara and bring her candy. Alex talks about how she needs to trust others in the fact that they can protect themselves so she can focus more on herself. Kara is happy and promises not to show up at any more scenes. Meanwhile, Lena is up to something when she calls to tell someone she “is in.”

Ben is released from prison. He talks about the Children of Liberty outside to TV cameras. Inside the jail, the con woman gets a letter from Manchester Black.