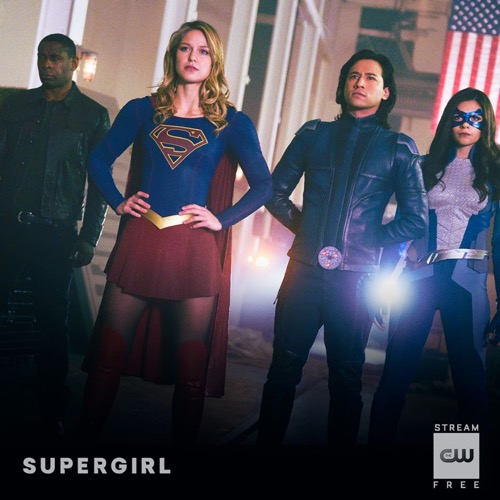 Tonight on the CW the series Supergirl airs with an all-new Sunday, March 03, 2019, season 4 episode 13 and we have your Supergirl recap below. On tonight’s episode called, “What’s So Funny About Truth, Justice, and the American Way?” as per the CW synopsis, “UPERGIRL FACES OFF AGAINST THE ELITE – Manchester Black (guest star David Ajala) breaks out of prison with the help of his new team, The Elite, who are set on punishing the anti-alien forces.

Supergirl (Melissa Benoist) pulls double duty as she tries to apprehend Manchester Black and his team as well as deal with a shocking new development with Ben Lockwood (Sam Witwer).”

Kara brings her latest article to Jimmy on Lockwood. Alex shows up to meet her for lunch but she tells her she has a meeting with the auditor that just came up. Kara heads out. Alex tells Jimmy she is sorry about Lena and him. One of the reporters comes in to talk to Jimmy about L-Corp.

Brainy and Kara bring Nia to the fortress for training. Telex comes in to say hi. Meanwhile, J’onn is at the prison when he is attacked by Manchester and a new friend. They make their way out of the prison only to run into Supergirl who is waiting. She is surprised to see Manchester with a friend in a red bowler hat and Menargie.

Brainy and Nia practice sparring. Supergirl and J’onn arrive to tell them what is going on with Manchester, the prison outbreak and to check where the villains are now. They watch video footage of the three in Rio killing more humans.

Alex and Lena talk. Lena admits she has been giving people powers. Alex thinks she needs to get more security through the government. Lena tells her she wants to keep this all very quiet.

Sitting at the bar, one of Liberty’s men come to see him. He tells him the boys on the ground aren’t happy with his conduct as of late. He breaks the news that Manchester Black is free and on the lose. Meanwhile, Manchester talks through the news directly to Supergirl. He has taken more human lives and wants to meet face to face with Supergirl.

Supergirl talks to the others about what she should do. He wants to meet her in Manchester, England.

Liberty meets with the President and asks he deputize the children of liberty. The president laughs at him as they take photos together.

J’onn and Kara talk alone. He wants to honor his father but he is a manhunter and Manchester has him angry. He sees him as a test. Kara consoles him and tells him he will find clarity. Kara needs to go alone to meet Manchester.

Nia asks Kelex to tell her all about Naltor. Supergirl heads to Manchester.

Manchester informs Supergirl that the US government is doing a lot more harm that she knows. He tells her to ask about Claymore and shooting down alien ships. She rushes to the president who tells her he isn’t going to change his mind about Claymore. She leaves. He moves up the launch.

Brainy catches Nia practicing things she has not to be trained in yet. He isn’t angry but impressed.

Supergirl goes to Alex’s and asks to talk. She is surprised to see her. She tells Alex about Claymore. Supergirl is torn about what to do. Meanwhile, the trio of villains learns of the president’s decision to move up the launch.

When the three arrive at the launch, Supergirl is ready to fight with Brainy, J’onn, Nia and some soldiers by her side. They fight. Alex shows up. They continue to fight. Supergirl sees Manchester has moved up the launch. Alex throws Supergirl a suit. She rushes to the satellite to save the day. Manchester flies with the help of brainy’s ring but doesn’t get far when J’onn stops him in the sky. They fight on the ground. Manchester uses the ring to jump time. Supergirl blows up the satellite.

Brainy is upset over the ring. Supergirl meets with the president and tells him she had to blow up the Claymore. There was no other way.

Alex cuts into Haley for not telling her about Claymore. She tells Alex she didn’t know.

The president asks Liberty to be his new Alien Director. Ben heads to meet with the guys who didn’t invite him to a meeting. They are angry to hear about his new role. He is all talk and no action. He gets angry and beats one of them down to the ground. They are all quiet.