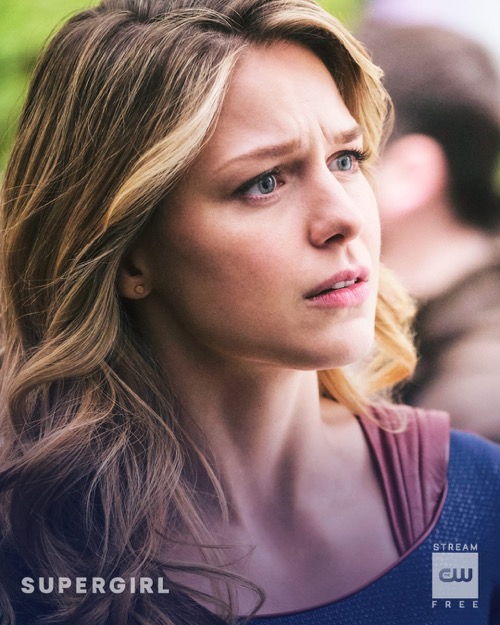 Tonight on the CW the series Supergirl airs with an all-new Sunday, March 10, 2019, season 4 episode 14 and we have your Supergirl recap below. On tonight’s episode called, “Stand And Deliver” as per the CW synopsis, “Between Ben Lockwood’s (Sam Witwer) new push to stir up the anti-alien movement and the Elite’s desire to target Lockwood and his minions, Supergirl (Melissa Benoist) is concerned about the safety of the American people – both human and alien. When Lockwood organizes a rally, the aliens decide to peacefully protest.

Brainiac (Jesse Rath) and J’onn (David Harewood) join the alien march while Supergirl and Dreamer (Nicole Maines) patrol to keep everyone safe. Meanwhile, James (Mehcad Brooks) picks up his camera again to cover the march for CatCo, and Hayley (April Parker Jones) assigns Alex (Chyler Leigh) a job that clashes with her beliefs. When The Elite and Ben Lockwood stir up trouble at the rally, Supergirl is forced to take a stand.”

The Elite have just finished dinner. They hit the street with trouble in mind. They separate for a bit after Menagerie sees a woman on the street who looks like a good snack. Menagerie is intercepted by J’onn, Supergirl, and Lia. They grab her and hunt down Manchester and the others, who get away after they try to assassinate Lockwood.

Jimmy calls Eve in to speak with her about the Black Budget at L-Corp. She tells him they are doing good and not evil. She will send him the budget after talking to Lena.

Haley meets with Lena. She needs her to rush the serum, they need it asap. Lena tells her she cannot take a chance and rush it. Eve shows up.

Supergirl shows up to see J’onn and Lia. She has circled the globe and has yet to find the Elite.  Meanwhile, Alex, Brainy and the others talk about the latest antics of the Elite. Haley tells them they have been appointed to guard Lockwood. Alex isn’t happy.

J’onn and Supergirl wait while Lia sits in a dream state trying to locate the Elite.

Lockwood takes the podium for a press conference. He tells them he plans to appeal the alien amnesty act. He plans to send all of the aliens back. Supergirl and J’onn watch on TV, upset about his plans. Lia comes to. She knows where they are. Across town, Haley tells Brainy they need to get ready for some possible trouble in the streets after Lockwood’s announcement.

Manchester and Hat break into the Fortress of Solitude. They take a look around. Lia works to see them. She tells J’onn where she sees them. J’onn heads there. Supergirl and Lia follow. The three try to stop Manchester and Hat.

The Morae is taken into headquarters. Haley and Brainy talk about an alien protest and march. J’onn, Nia, and Supergirl talk about their failure to grab Manchester who slipped through a door at the Fortress. J’onn can no longer feel him anymore. He may have gone off to another dimension.

Jimmy offers Franklin the reporter some help at the alien march. Meanwhile, Brainy arrives to see J’onn, Nia and Supergirl. They tell him about Manchester. He tells them about the march. It would be nice if Supergirl made an appearance, brainy tells her. She tells him she is attending to protect the public. He tells her she is also a citizen and she shouldn’t forget it.

At the rally, Lockwood bashes the alien race as Alex stands on stage there to protect. He gets his supporters fired up as Kara and the others march to meet up with them. Alex tells Lockwood to leave the stage before he is injured. Just then, Manchester and the Hat show up. Manchester appears to have multiplied as there are about a dozen of himself ready to fight the humans. Chaos breaks out as Brainy, J’onn, Supergirl and the team try to take them down.

Brainy faces off against Hat and wins. Manchester and J’onn come face to face. They fight. J’onn loses his temper, throwing him across the floor only to realize it is another man and not Manchester. It was a trick and he fell for it. He gets angry with himself. Meanwhile, Supergirl sees some good during the fight as a human helps an alien get up and off the floor.

The next day, Kara and the team talk with Jimmy whose photos of the march have moved people. It is announced that the President and Lockwood have decided to hold hearings about the aliens on earth.

Alex and Kara sit and talk while they drink a beer. They talk about the march and Jimmy’s photos. Alien or human, every action counts, Kara tells her sister.

On his way out of the office, Jimmy is hit by a bullet.