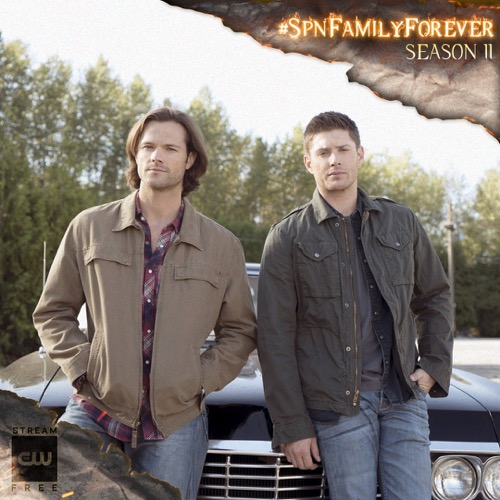 Supernatural airs tonight on the CW with an all-new Thursday, November 21, 2019, season 15 episode 8 called “Our father, Who Aren’t In Heaven,” and we have your Supernatural recap below. On tonight’s Supernatural episode as per the CW synopsis, “Sam, Dean and Castiel’s continued search for a way to defeat Chuck leads them to unexpected places and toward unlikely allies.”

At a casino, a cocktail waitress looks frantic as she continues to serve drinks while stepping over dead bodies. She approaches Chuck with an umbrella drink as he plays the slots in a lounge area filled with the dead.

Sam is tailing Eileen who is fighting a vampire. She finishes him off. Sam admits he was a little nervous. She could have left a note. She smiles a little. They head back to the bunker.

Dean brings Sam and Eileen the demon tablet. It could be the answer to their Chuck problem. Dean thinks Chuck has a weak spot and they can use it against him.

Cas calls on their old friend Donny who helps them come up with a plan to find Michael. He should be able to give them some insight on Chuck’s weakness and he should be willing to since Chuck locked him up. Michael is wearing Adam, as they recall. Suddenly, Donny morphs into Chuck. He apparently has Bluetooth on all of his prophets. Through the use of Donny, Chuck threatens the lives of everyone they know if they continue to look into him.

The guys talk about it. Cas thinks it’s a bad idea but they point out that no one is safe and they never will be. Especially if they don’t take out Chuck. They perform a spell to get to hell. Eileen stays behind. When they arrive they are attacked by a group of female demons. Someone yells stop. It is Rowena! She explains how when the fissure closed she landed in hell and has since taken over the throne. They explain that they need Michael. She demands her people find him.

Eileen gets a call from a hunter by the name of Sue who is following a group of vampires. Eileen tells her she is in and can help. Sam tries to apologize to Rowena about killing her. But she stops him, she is happier now with a lot of power. He fetches her a drink while she yells at Dean and Cas. She can sense something between them and they need to fix it right away. One of Rowena’s people come to tell her that they can’t find Michael. Meanwhile, Michael, who is Adam’s body, is sitting at a diner eating a burger and fries.

The guys return to the bunker. Dean and Sam talk about Eileen. Dean thinks that if Sam is going to try to have a family she’s the one because she understands life.

At the diner, Lilith arrives to talk to Michael. She demands that he come with her to go to see Chuck. Michael had no idea that he was alive. Either way he is not going. Meanwhile, Donnie calls acting a little crazy and tells Dean that Michael is in Egypt. Later, Cas tries to talk to Michael through angel radio. Michael arrives to see Cas. After some unpleasant conversation about the last time they saw one another, Cas lights a circle of fire around Michael. Sam and Dean arrive with handcuffs.

Back at the bunker, Michael is angry at them for what they have done and he cannot believe that they expect him to trust them. Michael lets Adam take the wheel so they can talk to their brother. Adam says hello to them. They apologize for what went down years ago until Michael takes control once again and asks them what they really want. Adam comes back to the surface and tells them to give it a rest, Michael isn’t really listening at this point.

Michael and Adam are in a room alone at the bunker going back-and-forth about what to do. Eileen gets a call from Sue who gets attacked while they’re on the phone. Eileen grabs Sam and they head out.

Cas talks to Michael alone. He shows him how his father, God, he’s always been a liar.

Cas tells Dean what he did and how Michael was very angry. They hear a noise and run to Michael who tells them his dad did lie to him.

Eileen and Sam pull up to where Sue was attacked. Sue appears and then morphs into Chuck. Meanwhile, Michael gives Dean and Cas his spell to kill God. They need a flower for the spell from Purgatory. He opens the door. He isn’t going, they are. Dean asks to talk to Adam one last time. Adam comes to the surface. Dean apologizes for everything that happened to him. He didn’t deserve what happened. “Since when do we get what we deserve,” he tells Dean. He wishes them luck.