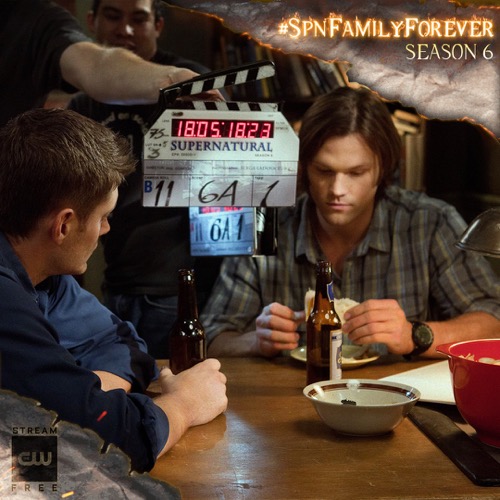 Supernatural airs tonight on the CW with an all-new Thursday, November 7, 2019, season 15 episode 4 called “Atomic Monsters,” and we have your Supernatural recap below. On tonight’s Supernatural episode as per the CW synopsis, “Sam and Dean investigate the mysterious death of a girl and the disappearance of another.”

Inside the bunker, gunfire erupts along with screams. Dean comes down the hall fighting one enemy after another. Ketch lay on the floor injured. Dean keeps walking, taking out men one by one until he sees benny in a room. He is hanging on for dear life but passes away, telling Dean he will see him on the other side. He doesn’t understand. He leaves the room to find Sam, looking evil and under the power of demon blood. Dean begs him to fight it before Sam kills him. Sam wakes from his nightmare.

Sam heads into the kitchen. Dean’s eating bacon. Dean picks up on Sam’s lack of sleep. He tells Dean just rough dreams. Dean has noticed his sadness in the last couple of days. They talk about Rowena and Jack. Dean has a case for them to take their mind off the loss. They hit the road to look into the death of a high school student named Susie.

At the high school, Sam poses as the FBI to question the principle. One of the parents wants to know if they can move the prayer service for Susie. Their son Billy has a scout coming to watch him play. Sam is beside himself. Later that night after cheer practice another student is attacked by a mysterious figure.

The next day, Sam and Dean assess the taped-off crime scene. Sam can’t help but be a bit negative. The townspeople have no idea and think moving around football games is the end of the world. They get a call back to the school.

Becky says goodbye to her family. They are headed off to go fishing. After they leave Becky sees Chuck on the curb. He needs to see her, to talk to her. He has had a rough couple of weeks. Becky wants nothing to do with him.

Inside the house, Becky tells Chuck how she has been writing her own Supernatural books. She tells Chuck to talk, she has a lot to get done. Chuck tells her about his falling out with Sam and Dean as well as his sister. He is stuck. She gets mad. She likes herself and her life for the first time. Chuck feels the opposite – he hates himself. Becky tells him he needs to write. It makes him happy.

Dean questions the school mascot for information. Meanwhile, Billy and Susie’s friend talk before his mother tells him it is time to go. The best friend stays behind and practices her speech for the prayer vigil for Susie. Sam and Dean come in. They think she may be the killer, a vampire until Sam realizes she has braces.

Back at Billy’s house, the parents argue over Susie while a teen boy is down the hall tied up in a room.

Becky gives Chuck a pep talk about writing. He sits immediately at her computer and begins pounding away on the keys.

Sam and Dean look over the security footage from the night before that shows the school parking lot. They head to Billy’s house. They talk to the dad who pretends he has nothing to do with the missing girls. They hear a noise. Dean goes to check it out. He finds a kid in the other. room, its a girl. She has a blood bag attached to her. The mother comes in.

Chuck has finished a rough draft. He begs Becky to read it and give him notes. She tells him it’s great but he knows she has more to say. She reluctantly begins giving him notes and goes on and on about how he needs more danger. He sits back down with a menacing look.

Sam and Dean confront the family. They realize that the father isn’t a vampire its the son. The parents break down. They have been trying to protect him. They love him, telling Sam and Dean that they have no idea because they must not have kids. Billy steps up. He can’t do this anymore. He says goodbye to his parents and gives himself over to Sam and Dean. They take him out into the woods. Dean beheads him.

Becky reads over Chuck’s revisions. She is upset. He cant do this to the fans, to Sam and Dean. She is upset, nearly in tears. Her family comes home. Chuck sends them away into oblivion. He tells her he is God. She begs to have her family back. He makes her disappear into thin air next.

On the way home, Sam and Dean talk. Sam is sad and feeling down about everything. Dean gives him his usual brotherly pep talk. What they do matters. They owe it to Jack, their mom, Rowena and all of those they lost and with Chuck gone they are free to move on. Sam explains that he doesn’t feel free, sometimes he can’t breathe. He tells Dean that maybe tomorrow he will feel better.

Chuck continues to type away with a wicked grin on his face. “This is going to be good,” he tells himself.