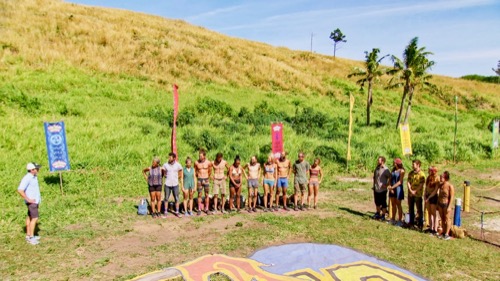 Tonight on CBS Survivor: Edge of Extinction airs with an all-new Wednesday, May 8, 2019, Season 38 Episode 14 and we have your Survivor recap below. On tonight’s Survivor season, 38 episode 13 called “I See The Million Dollars,” as per the CBS synopsis, “In the Season 38 finale, one castaway will take home the $1 million prize and earn the title of Sole Survivor. One castaway’s game will unravel, and someone will get a chance to return to the game when castaways “living on the edge” go head to head.”

All the survivors that were at the Edge of Extinction return for the chance to return to play in the game. This is how it is going to work, they are going to be attached to a rope, on Jeff’s go, they are going to make their way through a series of both obstacles and unclip, they will then use pieces of rope to build a bridge and cross it. Finally, they will make their way to the end will they will maneuver two balls through a table maze. The first person to finish will put their buff back in and return to the game.

Joe and Chris are going fast and in the lead, it almost looked like Joe was going to take the win, but Chris took it.

Jeff asks Ream her darkest moment on Edge of Extinction, she says it was the first night. But she came out here to prove something to herself and she did. Jeff goes on to ask the other players how their journeys were and they all are extremely emotional; they head to the Ponderosa and Chris returns to the game with the top five, to become the top six and play for a second chance at winning a million dollars.

Back at camp, Chris tries to come off as being weak and not a threat to anyone but Victoria is not buying it. Rick is happy his buddy back, but he betrayed him and is worried that this might ruin his game. Chris tells Rick that he wants to align with him, but Rick is not fooled.

Chris tells Lauren that he knows she has an idol. She tells him that she is the best option for him to align with, she can keep him safe.

Time for the Immunity Challenge; they are going to race through a series of obstacles, they will then cross a balance beam collecting a bag along the way, they will use the tiles inside to solve a combination lock releasing puzzle pieces. They will use those pieces to solve a circular puzzle, the first person to finish will win immunity and reward: steak and chocolate cake for dessert.

Victoria has the lead, Rick is behind her. Chris is dead last, still trying to figure out the combination. Everyone is doing the puzzle, looks like Julie now has the leads. Julie’s puzzle is about to fall and Chris talks her through it. Julie has it, she wins immunity and reward.

Julie chooses Chris to join her, Jeff tells her she can pick another person, she picks Lauren. Rick tells Julie that he has gone to bat for her many times and he is disappointed that she took Lauren who has had many rewards.

Julie brought Chris to the reward because she wants to ensure that she can get rid of Rick. Chris tells her that the two biggest threats according to the jury is Victoria and Rick, they should write both their names down and if Rick pulls an idol, then Victoria goes home.

Chris returns to camp tells Rick that he is completely loyal to him. Chris was given an idol, he gives half of it to Rick to prove his loyalty. If they are both there after Tribal Council, then the idol becomes one and valid.

Time for Tribal Council, Chris says that being back in the game is like a rollercoaster, he is trying to figure out how to play this game all over again. Lauren says Chris has fit in good. Julie says she picked Chris for reward because he didn’t eat in 36 days. Rick says he was disappointed that on a human level, Julie didn’t pick him.

Time to vote; one vote for Rick, Rick, Rick, Chris, Victoria, Victoria. The fifteenth person votes out, Victoria. On her way out, she tells Gavin that she is voting for him.

Back at camp, its dark and Rick gets up to look for another idol. First, he takes two fake idols and hides them, hopefully, it was throwing them off the trail from the real idol. Then Chris and Julie walk up, its go time. Rick finds the idol and now, they have no chance of voting him out. Rick is on top of the world. Rick gives Chris back his half of the other idol. the two men have idols, they are going to the final four together.

Julie thinks that there will be two idols to find, and she does find one. Although, it is RIck’s fake idol? Then Lauren finds a clue to a hidden immunity idol, Rick watches her and is killing himself laughing as she goes to look for it. Lauren finds Rick’s fake immunity idol.

Time for immunity challenge; they have to race over six different obstacles, over the ocean, collecting puzzle pieces as they go. Once they have all the pieces, use them to solve a puzzle. The first to finish is guaranteed a spot in the final four.

Everyone is staying at the same pace and they arrive at the puzzle at the same time. Gavin is on fire, one piece after the other. It is now between Gavin and Rick. Rick wins immunity, guaranteed a spot in the final four.

Rick is in control of the game, not only does he have immunity, he also has an immunity idol. Gavin pitches Rick, he wants the idol, but if Rick scratches his back, then he has to scratch his back too. They shake hands. A promise is a promise, but Gavin is still here are Tribal Council, then he may have to break his word.

Julie has an idol and thinks she is safe, she wants to take Chris out. Lauren as well has an idol, but now she is wondering if it is a fake because three idols were exposed and that doesn’t make sense.

Lauren pitches to Chris to get rid of Julie, he thinks it is a smokescreen and they are going to try and get rid of him; but he is not worried, he has an immunity idol.

Time for Tribal Council. The members of the jury enter. Rick tells Jeff that he had his back against the wall and feels it gave him the strength to win immunity. Chris says he is nervous that he didn’t win immunity and needs to trust the relationships that he has made since returning. Time to vote, Jeff tells everyone that tonight is the last night that they can play their hidden immunity idols. Julie approaches Jeff with an idol, and he says it is fake. Lauren walks up and Jeff tells her that her idol is fake. Rick walks up and plays an immunity idol for Gavin, it is real. Chris gets up, he plays an immunity idol and it is real. That is it, Jeff reads the votes; Chris, Chris, Chris, Lauren, Lauren.

The next day, it is time for the final immunity challenge; they have to negotiate a rocking walkway, attempting to stack blocks on a wobbly ledge. The first person to stack their blocks, spelling Final Three, wins immunity and spot in the final. Chris wins immunity and guarantees himself a spot in the final Tribal Council. Chris gets to choose who to choose to sit beside him, and which two will have to make a fire to determine their spot.

Chris shows Julie and Gavin how to make fire.

It’s over, Chris wins his place in the final three in a historic move. Rick leaves, he has been eliminated from the game.

Night 39 and the final Tribal Council. Jeff brings in the members of the jury.

Gavin, Chris, Julie have gone as far as they can go and now they have to convince the jury that they deserve to win the game.

The jury asks the final three questions to help determine who they are going to vote to win a million dollars. Rick looks devastated as a juror, he looks like he is going to break down and cry. Chris asks Gavin a question and the jurors get upset, tell him it is not his place and it is rude! Did Chris just lose his chance at a million dollars?

Chris tells the jury that he convinced Lauren to play her idol to save him, that was a big gameplay. Jeff asks if the jurors are undecided and they say yes.

Chris goes on to say that he made the biggest game move by giving his immunity necklace and fought for his chance to be in the game. Gavin goes one to one with Chris and tries to get the jury to realize that Chris didn’t play the game well because he wasn’t in it for so long, being over at Edge of Extinction.

Gavin says he thought Survivor was his dream but he knows that he was playing with his heart for his family, and more importantly his wife.

Chris says he wanted to play this perfect game and he was blindsided. He made his way back into the game, knew he had to make the best possible move, give up his immunity necklace, to show how hard he played the game.

Julie says that her playing the game has been life-changing. She never lost sight of winning the game, she wanted to prove that she was strong and valuable.

The winner of Survivor Extinction is Chris.