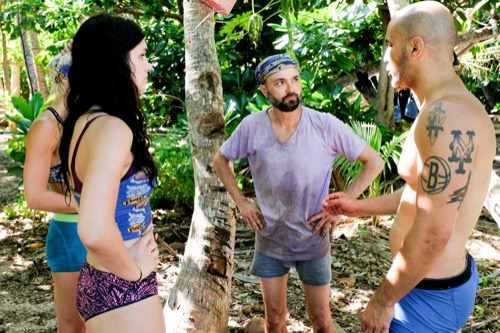 Tonight on CBS Survivor: Edge of Extinction airs with an all-new Wednesday, March 20, 2019, Season 38 Episode 5 & 6 and we have your Survivor recap below. On tonight’s Survivor season, 38 double episodes called “It’s Like the Worst Cocktail Party Ever, Parts 1 & 2,” as per the CBS synopsis, “The castaways’ mental toughness is tested on the Edge of Extinction, and targets begin switching from one castaway to another when weaknesses are exposed.”

Rick is at Edge of Extinction and he thinks it is just another test to see if he can come out on top.

Time for the Reward Challenge, they have to race through a series of obstacles, collecting bolos along the way. They will then attempt to land those bolos on a board. The two first tribes to finish will win. The first tribe will win peanut butter and jelly, cold milk and bread. The second tribe will win a small plate of pb&j. Kama and Manu win. Lesu gets nothing.

At Kama, the tribe couldn’t be happier, Julia believes they are a force to be reckoned with. Although it is in the back of her mind, that Joe is the biggest threat in the game right now and would rather get him out of the game sooner rather than later. On the other hand, Joe knows that he is a huge target and trying to make their tribe mates comfortable so he doesn’t go home. Ron is in a good position game wise, he wanted to get rid of Joe, but since he is a workhorse, he wants to keep him in the tribe. Julie doesn’t want Joe to go far in this game.

At Manu, the tribe is happy to get what little they did with their pb&j sandwiches. Wendy doesn’t the tribe to eat the chickens, so they have turned into free range. Aubry is frustrated, all they do is talk about chickens and she is dying to play.

At Lesu the tribe is feeling like the misfits that couldn’t. Lauren is so sick, but happy that Wardog is on her side. David knows that he has to find the idol, he keeps looking for it. Kelley is teamed up with Wardog, she feels like she can trust him in this kill or be killed the game.

Time for the Immunity Challenge and this one involves teamwork in the water to gather puzzle pieces. Lesu is way behind, but Wardog gets them back on the map. The good news is, the other two tribes have their puzzle pieces but can’t figure them out yet. Kama and Lesu win immunity. Manu is heading to Tribal Council.

Aubry has finally gotten control of her tribe. She is aligning herself with the women and talking about taking out one of the men while they have the chance. It is incredibly difficult though when Wendy can’t make a decision. For Aubry, it is a big decision because she has to decide who she is going to align herself with. Aubry goes to hide her idol and finds an envelope. Aubry is given the extra vote and the last time it can be used is when there are seven people in the game. Someone in the game is looking out for Wendy and she hopes she can find out who it is.

Time for Tribal Council. Aubry says that everyone was talking after the challenge. Wendy is an obvious consideration and she is still smiling. Wendy says that when you find the black cat to your witch in Survivor, its a perfect Halloween night, its like hocus pocus, abracadabra. Jeff is surprised and asks Aubry if she found her black cat, she says she may have found her black cats. Wendy says it is hard to separate real life from this game. Eric says that at some point you have to trust the people that you trust. Time to vote. Tonight it is a blindside for Aubry, three votes and she is out – the shock on her face is priceless. And, like people before her, she heads to Edge of Extinction with her idol and extra vote in her pocket, she is an utter state of shock.

Time for the reward challenge and both Kama and Lesu are shocked that Aubry was voted out. For today’s challenge, they are going to leap over a series of tables, then pull a lever to drop sandbags. They will then work together to get those sandbags to the finish. Throw those sandbags at a target until they drop a flag. First two tribes who drop the flag win reward. The first tribe to finish is coffee, pastries, and cookies. The second tribe to finish gets ice coffee and cookies.

Kama wins yet again, this is a big reward. Manu wins a reward, Lesu heads back to camp with nothing.

At Kama, Julie just expects them to win the challenges, she can’t imagine them not winning.

At Lesu, the tribe needs food and Lauren is so frustrated with her crappy camp. She is so hungry but the rice makes her so sick. The tribe has had no food for days. Wardog finds that Lauren is giving up and maybe she should go home. He approaches David and Kelley and they agree, but Kelley then speaks to David and tells him that she doesn’t want to align with Wardog. In the beginning, David wanted to vote out Kelley, but that has all changed.

At Edge of Extinction, everyone is searching for an advantage. Devon thinks it is at the beach near the mast. In the end, Ream finds it, but Keith grabs it out of the water and she is upset. Aubry thinks these people are a disaster, they are so dysfunctional, people are legitimately losing it.

Time for the Immunity Challenge. for today’s challenge, they are going to climb a ladder, and then maneuver a bag attached to a bamboo frame. Then use the ball inside to drop a cage door. Sprint to the finish and solve a Survivor puzzle. Lesu has been on a losing streak of epic proportions. Kama wins immunity. Both Lesu and Manu are heading to tribal council.

Wendy thinks they have a really good shot at getting David from the other tribe on their side.

At Lesu, Kelley is trying to think strategically, she thinks they should take out Victoria, Wardog wants to take out Wendy. Kelley knows he is right, but she hates that he always tries to take control. Lauren is upset that Wardog is always in control, she is just hoping for a merge because she is so hungry. Wardog walks off, he wants to find an idol and if he has his way, he will get rid of Lauren. David is upset that Wardog walked off and he decides to head out with Lauren and Kelley to also look for an idol. Kelley looks up in a tree, and it is just there; having that safety tonight is really huge. Lauren and Kelley both have idols, but they don’t know what they are going to do.