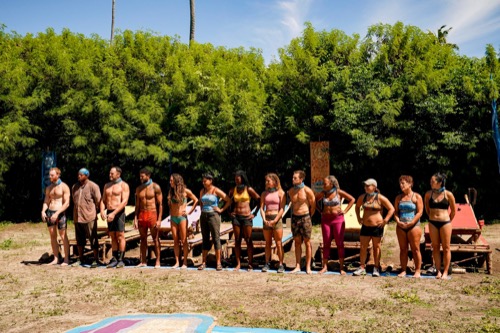 Tonight on CBS Survivor airs with an all-new Wednesday, November 27, 2019, Season 39 episode 10 and we have your Survivor recap below. On tonight’s Survivor season, 39 episode 10 called “Bring On The Bacon,” as per the CBS synopsis, “One castaway must prove how well they know their castmates when presented with a game-changing opportunity while visiting Island of the Idols.”

The double tribal council has caused the tribemates to be very nervous. Lauren is super nervous because she doesn’t know what is going on at the other tribal and Missy is playing really hard. The other tribemates are back and everyone finds out that Missy is gone. Karishma, on the other hand, couldn’t be happier that Aaron and Missy are gone. Elizabeth feels a little stranded, her closest allies are gone and she doesn’t have that now. Now that she is on her own, Elizabeth is going to do what she has to do to stay there.

Day 28, Dean wants Karisham out now and tells Tommy and Lauren. Tommy agrees with him to his face, but he is more worried about Elizabeth because she is an Olympic athlete.

A boat arrives, a man hands Tommy a note and a bag. The notes say, “choose one person to go to the island of the idols, it must be unanimous. If you cannot agree, draw one name from the bag, that person must go on the boat immediately.” Lauren jumps up and volunteers and nobody else has a chance.

At Island of the Idols, Sandra gets attacked by a chicken that wants papaya that she is eating. Lauren arrives, Sandra tells her to grab her bag, they will explain everything. Lauren tells them that she is a strong social player. Rob explains that she is going to get a lesson, hers is about situational awareness. They will give her a chance to predict the next immunity winner. If she is right, she will win an immunity idol good for the next two tribal councils. If she loses, she loses her vote. Rob tells her that the challenge is a concentrated game, and if people sit out, they are going to get breakfast. Lauren takes time to answer, Rob gives her a chance to pick two – but if she loses, she loses her vote at two tribal councils. Lauren chooses Noura and Elizabeth.

Time for the Immunity Challenge, where the tribemates are going to pull up on a handle, clamping a ball between a set of jaws. If at any point they lower the handle, that ball will fall and they will be out of the challenge. If on day 30, they feel comfortable, they can sit out and enjoy a full breakfast with mimosas. Jeff tells them that they either eat or they compete. The following players are going to eat; Dan, Dean, Tommy, Lauren, Janet, and Lauren. Karishma, Noura, and Elizabeth will compete. It doesn’t take long for Karishma to drop, but she is not allowed to eat. Elizabeth drops, Noura wins individual immunity. Time to stop eating, the challenge is over.

Back at camp, the consensus seems to be to get rid of Elizabeth because she is a strong player. Elaine would rather get rid of Karishma but will vote with the majority. Elizabeth tells Noura that she thinks she is on the chopping block and can’t believe she blew it. Karishma doesn’t feel well, Noura helps her down to the beach to get some water and while doing that, she goes through Karishma’s bag to see if she has an idol, she doesn’t find one.

Krishna is feeling better, she starts talking game with Elizabeth. Lauren overhears Dan’s name being said, she tells him and he calls Karishma on it. Looks like Karishma just sealed her fate in the game.

Time for tribal council. Jeff tells the jury that six people choose to eat and not participate in the immunity challenge. Dan says the core alliance is getting stronger, that is why six people who sat out.