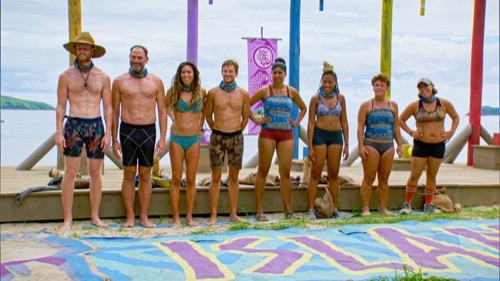 Tonight on CBS Survivor airs with an all-new Wednesday, December 4, 2019, Season 39 episode 11 and we have your Survivor recap below. On tonight’s Survivor season, 39 episode 11 called “A Very Simple Plan,” as per the CBS synopsis, “Trust is tested when new alliances are formed but some old ones remain. Also, lines are drawn in the sand after the family visit.”

The contestants got to enjoy one of Survivor’s milestones. They were given the chance to see their loved ones again and it had everything. There were some kissing, hugging, and there was even some crying. It was an emotional time all around. The contestants were happy to see their families and it turns out they could see more of them if they win this latest challenge. The latest challenge required that they are tethered together as they made their way through the obstacles and ultimately throw sandbags onto a small wooden disk.

The winner of this challenge is allowed to spend more time with their family members. Therefore, everyone wanted to win this particular challenge. The contestants were first set up in teams and then each had to fight their way to finish line all in the name of love. It had been a close call because people in the lead were forever changing. Then it came down to Janet and Tommy. The two of them pulled off a win and they could choose two others to join them on their reunion with their families. They chose Dan because it’s nice that he got to see his son and they chose Lauren who was the most emotional seeing her husband.

Naturally, some of the others were angry that they didn’t get to join them but they didn’t really matter because they were losers. It was the winners that got to spend the afternoon with loved ones. They all got to enjoy some delicious food and it was such a relaxing time for them that of course, it had to end when they started talking strategies. The four were in an alliance. They wanted to maintain that alliance and they thought they were in a strong position because the others aren’t really working together.

Or at least as far as they knew. It turns out the contestants that didn’t go on the Family Fun Day had come together to complain and there was no one louder than Noura. Noura felt betrayed when her own alliance cut her out of that moment with her family. She told anyone willing to listen that she has done so much for her supposed friends and not one of them has done anything for her. Noura was fed up with her alliance. She was now prepared to work against them and here she was reminding this other group of contestants that she was more likable than Karishma.

Sorry, Karishma. You’re not all that likable and pretty much everyone knows it by now although she did come through for them by telling them she saw an idol the other day. She told them it was blue and so they began looking for it until eventually, Elaine found it. No sooner did she find this idol that all contestants went into the Immunity Challenge. This latest challenge demanded that stand on a wooden block and balance a ball. It easily knocked out the guys and Janet took a fall off of the block. It soon came down to either Lauren or Elaine.

Of the two of them, Lauren was the one most struggling. Everyone thought she would lose to Elaine and so it came as a surprise when Elaine dropped the ball. The immunity, therefore, went to Lauren. Lauren and her alliance were now in a stronger position and they wanted to use that to get rid of poor Karishma. It was all set. There was just one problem with this plan and that’s Janet telling Noura about it. Noura went all Judas on her alliance and she was telling everyone on the island what the plan was.

Noura told Elaine, Karishma, and she told Dean. She even confused Dean because she kept trying to come up with her own plan and it wasn’t working. If anything, Noura’s shenanigans had left her new alliance feeling wary about her. Neither Dean nor Elaine trusted Noura. They thought she would somehow ruin the new plan and so two different groups went into Tribal not knowing what Noura was going to do. She was the wild card. Noura hadn’t realized she was confusing everyone or that her new alliance felt she couldn’t be trusted.

It was their mistrust of her that started the whispering. At Tribal, Dean whispered to Tommy and Tommy whispered to Lauren and so Noura decided to blow everything up. She announced what Dean and the others were doing and then she tried to justify her own part. Noura created such an issue that everyone wanted to vote her out. They weren’t sure if they were going to do it tonight or at the next one and so they had a small session in which they still ended up voting out Karishma. She was voted out.

And none of the people watching were sure why Noura got to stay.