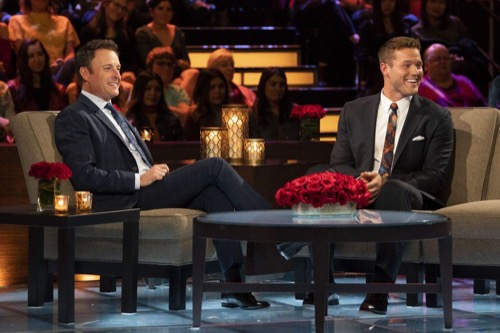 The Bachelor 2019 airs on ABC this evening with an all-new Monday, March 4, 2019, season 23 episode 9 and we have your The Bachelor recap below. On tonight’s The Bachelor season 23 episode 9 as per the ABC synopsis, “When last we saw Colton, he had left the three remaining women – Cassie, Hannah G. and Tayshia – after the hometown rose ceremony and desperately rushed to talk to Chris Harrison. Overwhelmed by having just sent Caelynn home and nervously anticipating the Fantasy Suites that lie ahead, the virgin Bachelor is about to embark on a once-in-a-lifetime journey to the Algarve region of Portugal. It will be a trip full of major surprises, high anticipation and extreme anxiety, after vowing to save himself for the woman he loves.

A stunning twist – a first in show history – causes Colton to literally have a breakdown, leaving everyone speechless. What he does next not only changes his journey but everyone else’s. How will it all end? Will his worst fears be realized?”

Colton and Tayshia take a helicopter ride to Cape St. Vincent, once considered to be the edge of the earth. Again, Colton confesses his feelings for Tayshia, saying he is falling in love. Tayshia had a wonderful day and she is ready to take it to the next level. Tayshia and Colton are about to go to dinner, and she wants to reassure him that everything is ok. Intimacy is a big thing for, and she is in love with Colton. Colton has thought about the first time many times, it will be caring and passionate, a moment he will remember forever. A part of him is excited and another part is scared. Colton thanks Tayshia, spending time in her home and with her family pushed their relationship even more forward. He loved jumping out of a plane with her, he had faith and he did it. Tayshia loves how Colton is open and honest with him. Tayshia is having a wardrobe malfunction and it breaks the tension in their conversation while they laugh a little. Colton says he can make a joke about him being a virgin, but sex is just one important part of the relationship. Tayshia tells him that she waited as well, the first person she had sex with was her husband and knows the value of waiting. Colton says he will always be truthful with her, he knows how important it is to her. Colton hands Tayshia the invitation to the Fantasy Suite, she says she would love to. The two seal it with a kiss. They start by feeding each other. Colton has been thinking about this moment for a long time, he has confidence though, and says he is experienced in other ways. They open the champagne and head into the bathroom, the bath is drawn with lots of bubbles. Next, the two fall on the bed and start kissing, Colton closes the door.

The next morning Tayshia admits that they did not have any physical intimacy, but she is happy that they bonded alone. The next time they will see each other is at the Rose Ceremony. Tayshia walks him, tells him that she loves him. Colton wasn’t ready to take it to the next level, he is falling in love, but he is not in love with Tayshia.

Colton continues to follow his heart and today is his overnight date with Cassie, he is definitely falling hard for her. Colton wants to be in love with Cassie and to get there, he needs this time with her. Colton is hopeful that at the end of the night, they will be in love. The two walk around a small town in Portugal, Cassie is really happy and thinks Colton is a really easy guy to love. Colton and Cassie as a couple really freaks Cassie out, she is confused and wonders if they need more time. She doesn’t think she has ever been this confused, it is so hard.

Colton is falling more and more in love with Cassie and he hopes, that they both can get past her father not giving his blessing. Colton and Cassie have a huge surprise, her father is there, and his first stop is to see Cassie. He is there because he has a concern about the potential engagement and as far as he thinks, your commitment to marriage is the same as your commitment to God. They talk about his not giving his blessing, he says he can’t after a half hour with someone. Cassie says that she is not happy that they were not as supportive as she thought they would be. He asks her right out if she is in love with him, she says she thinks she does, but she wishes she had more time. She says a proposal is huge, but not having any more time with him is huge as well. He says that she shouldn’t been hesitating, she should know without a shadow of a doubt that it is him, that would be fine. But, they don’t think she is in love with him. He tells her that if she is not feeling it, the longer she holds on to him, she is not doing him or her any service. Meanwhile, Colton feels complete when he is with Cassie.

Colton and Cassie are together, it is evening and they enjoy a glass of wine together. Cassie tells him that her father showed up at her hotel room earlier in the day, he talked about how big this whole thing is and how he didn’t have any doubts when he met her mother, nor did she have any about him. Cassie tells him that she would hate if he came her and didn’t get what he was looking for. She tells him that she loves him so much, but she is not in love with him. She says she doesn’t know why she is so confused, there is just a lot to think about. He asks her if she was planning on leaving that evening, she says yes because she doesn’t know if she can get where she should be with him by now. Cassie gets up and walks away. Colton is clearly devastated. Colton goes to find Cassie and they walk and hug, she is crying. She says she wanted more than anything to be excited for the night. He says he is ok with being patient, she says she is not sure if she can get there and that is what she is worried about. He tells her that he doesn’t want to lose her, and asks if they can sit back down. She tells him that she doesn’t think she has ever been more conflicted in her life. He tells her that all he does is think about her when he is on other dates with the women. The last thing that Colton is going to do is give up. He tells her that he wants to be with her, he loves her. Colton starts crying and shaking. Colton tells her again that he is in love with her and he believes that she cares about him, and doesn’t know where the doubts are coming from. She says that she is a little terrified to meet his family when she is not sure. He tells her that he wants her no matter what and she is surprised that he can say that when there are two other girls there. He confesses that he was in love with someone who didn’t love him back and he knows that is not them. Colton is shaking, both are crying. She tells him that she so badly wished she knew if she could get to the same page as him, but she just doesn’t know. Colton gets up, Cassie puts on her jacket, he walks her to her car, he tells her that he wants the best for her, she says that she wants the best for him, someone who is insanely in love with him. She asks him if he is mad at her, he says no, he loves her. Cassie gets in a car and leaves. Colton goes to his room. Colton saya he is done with this, leaves his room abruptly, Chis is calling for Colton, but Colton jumps a fence and he is gone. Chris and the crew are looking for him.