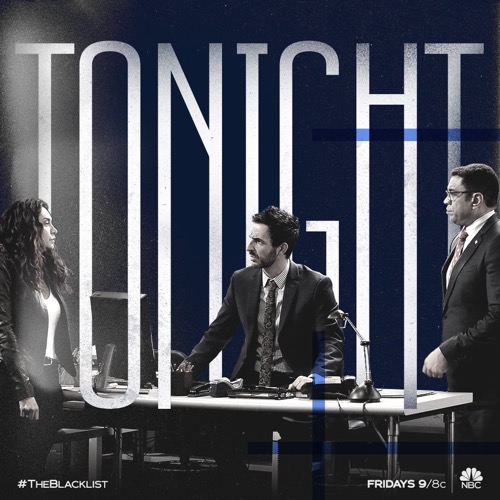 Tonight on NBC their hit drama The Blacklist starring James Spader airs with an all-new Friday, February 8, 2019, episode and we have your The Blacklist recap below. On tonight’s Blacklist Season 6 episode 6 called, “The Ethicist”,  as per the NBC synopsis, “Red is sent to a federal medical institution following his request to the court for a psychiatric evaluation, and Liz and Jennifer use his time away to search for a Blacklister they believe may have valuable information about Red’s past.”

On tonight’s episode, we see a bicycle on the road, a car drove into someone driving it. Then we see the driver, drag the victim into the woods, but put the bicycle and running shows into his trunk. Then, we see the same man speak at a conference for Chione eCommerce Solutions, saying that they will be opening a brand new distribution facility. The man’s name is Mr. Timberly, and he visited by a man who knows what happened in the park, he hands him a business card and says he thinks he could be of assistance.

In court, it is back to Red’s case. Red tells the judge that he is not ready to proceed to trial, like or not, he has to be open to the idea that there may be certain mental abnormalities that may cause his criminal conduct. The attorney says that Red is not crazy, is just crazy as a fox. Red is making a motion to ask the court is indulgence because he could be as mad as a hatter. The judge grants his request for a psychiatric evaluation.

Red meets with Liz and he tells her there is a man that he needs to see.

Liz calls Jennifer and gives her an update. Jennifer tells her their case is at a dead end. Liz thinks she might be able to get the task force to help. Red doesn’t have a case, but the task force doesn’t know that, so they can squeeze theirs in.

The task force meets to hear about the case. Gerald Todd Cleper was a doctor who killed 17 patients and has vanished for twenty-eight years and had plastic surgery from criminals favorite plastic surgeon elite, Dr. Hans.

Mr. Timberly goes to visit the guy who said he could help him.

Liz and Kessler go to visit a Private Investigator hired by the victim’s families, they want to know what he knows. The man claims that Clepper killed the people because they were seeking aggressive treatment and Clepper felt the resource could be used better on healthy people.

The man tells Timberly that people would put him behind bars if they knew what he did. Kimberly tries to bribe him, the man suggests that he is going to have to kill the witness, it is the only option. The witness’ name is Ms. Carter, Timberly says he is not a murderer, the man says that is why he needs him. In return, he wants him to build his plant in Detroit and not Malaysia. Move the plant and his life will have more value that the person who is set to testify against him.

Back at the Task Force, Aram discovers that Clepper had a kidney transplant, he narrows it down to Cameron Morella, this is the man who is blackmailing Timberl and Aram thinks he is Clepper.

Morella goes to see Ms. Carter, tells her he is there on behalf of Mr. Timberly, she freaks out and tries to run. Morella grabs her and she hits the floor, bangs her head and is bleeding from a head wound.

Red is with the doctor to see if he is competent to stand trial, she says from what she read she thinks he is quite capable. She asks if he has killed people, he says if he has killed anyone, he believes it was just.

Ressler and Liz are on the site of Ms. Carter’s body, she was found dead and believed to have slipped and fall. Liz says this is no slip and fall, she knows Morella is involved.

Red is in a psych ward beside a man, he says hello “Atikus.” He goes on to say he needs a favor, he has to find their mutual acquaintance, he is in trouble, it is a matter of life and death. A nurse walks up and tells Red to not bother speaking to the man he on a high dose of meds and completely out of it.

Morella is gone and Liz finds out that the girl found dead was a witness.

The therapist tells Red that he is masquerading and she doesn’t understand why. But, she doesn’t think he is a bad guy, she just thinks he is an imposter.

Liz questions Timerbly and tells him that she ties him to Clipper, she is going to drag him down with him. Kimberly tells the truth, he says the man said he would make the witness go away. He gives Liz the man’s address and phone number. Ressler is wondering why Red gave them this case. Liz calls Jennifer, gives her the number and asks her to have Buck trace the phone number.

Red is still working at Atikus, he tells him that they have him on a strong cocktail of narcotics. Atikus freaks out and tries to attack the therapist for prescribing the meds, they take him into custody.

Liz has a lead from Jennifer, she lies to Ressler, tells him that she is going to go speak to Red.

Liz is at the trailer, Morella answers the door.

Red goes back to see Atikus, but they gave him a high dose of meds and he is almost gone. Red tries, again and again, Atikus gives him a generals name and then he is gone.

Jennifer is there in the trailer with Liz and Morella, they want to know about Red. He says he never saw Red and Red never saw him. Ressler calls in, Liz says that she spoke to Red and he knows nothing, more lies. He tells them that the only one that has seen Red before and after surgery is a nurse. Morella wants his gun, he doesn’t want to spend the rest of his life behind bars, he tells her that he will trade the name of the nurse for the gun. Liz gives him the gun, he gives her the name, Margaret Reed Renard, find her and they will find out who Red was. Liz leaves the trailer; she and Jennifer leave.

Ressler arrives at the trailer, Morella is dead and he finds Morella’s burner, he wants to know what is going on, he knows this is not Red’s case. Liz tells him that she can’t say anything, but one day she will tell him the truth. She didn’t kill Morella, but she did let him kill himself. She tells him that it is his decision on whether he shares this with Cooper.

Ressler speaks to Cooper, tells him that Morella was a suicide.

Liz is on the phone with Jennifer and tells her that they need to find the nurse.

The therapist is with Red, she tells him that her work there is finished, he was obviously there to see his friend.

Back in court, the judges announce that Red is not clinically insane and can assist in his own defense. They are moving towards jury selection immediately, it’s going to court.

In his cell, Red calls Dembe from a phone he planted for him. He gives him the name of the general that Atikus gave him.