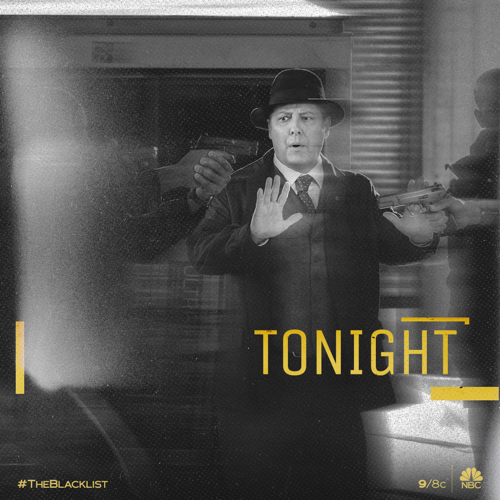 Tonight on NBC their hit drama The Blacklist starring James Spader airs with an all-new Friday, April 12, 2019, episode and we have your The Blacklist recap below. On tonight’s Blacklist Season 6 episode 15 called, “Lady Luck”,  as per the NBC synopsis, “Liz and Ressler investigate a Blacklister who offers to erase gambling debts – at a deceptively high price; Dembe grows concerned as Red tests loyalties of their business associates in search of the person who turned him in to the police.”

Tonight’s The Blacklist episode opens with Red and Dembe in a warehouse and there are men arguing, It’s the first shipment of a three million dollar order, there is a dispute over some shipping manifest that they are missing. The person in charge of the manifest is Henry Morris, he works at the department of transportation. All of a sudden guns are raised, the men form a circle and Red is in the middle and tells them to put the guns away; it’s just a bunch of tv’s and there are plenty more where that came from.

In Atlantic City, NJ Henry is in a bar, he has lost his savings, his house, everything to gambling and his wife has no idea. A woman is sitting beside him and he is surprised that she knows his name and all about his debts. She tells him what is important is luck, and he has just changed; all he has to do is make one more bet, on himself.

Red calls Henry, he is in a bar. Red tells him that five Albanians and four Nigerians walk into a shipping depot, there is no punchline, where the hell is he. Red calls him out on gambling, but Henry says he wasn’t gambling, a miracle came to him, they made a deal and after he makes a trip, things will turn around; he will be a new man with luck on his side.

Smokey is in a plane with Red, tells him it is all arranged, he has locations in St. Louis and Denver, secure, private – it has all been arranged. Red tells him to give the addresses to Dembe and he will alert the unfortunate guests. While he was in prison, certain people in his organization took it upon themselves to do a little freelancing, in an attempt to move against him. He knows who the Benedict Arnolds are and will be confronting them at the secure locations. Smokey tells Red that he can trust him and asks what will happen to those people. Red says everything is negotiable, except for the person that turned him in, their fate is already sealed.

Liz brings the case to the task force, he claims that Lady Luck is not an urban legend but a blacklister that is all too real. Aram brings up Henry’s information, he lost $3,400 last night and over the last two years, $196,000.

Henry is on the phone with Lady Luck, he says he doesn’t know if he can do it, she tells him to get sure, she is married to a loser and it is a fate worse than death.

Cooper tells Liz to head to Baltimore and speak to Henry’s wife, see if she knows anything. Ressler is with Liz, he asks Henry’s wife if she is aware that he was let go from his job two months ago, she knew nothing. They tell her he has been gambling. She tells them he gambled before they married and she thought he was all over it.

A woman is in a tub, Henry breaks open the door, her dog is barking, he pushes her under the water and kills her.

Ressler is on the scene of the murder, they have a photo of Henry, he robbed a liquor store the night before and his clothes match those of the killer. They think the scene has been staged as a robbery gone wrong.

Henry calls his wife, tells her that their troubles are over, he has something for her, they plan to meet at the playground the following day.

Red as one of his Benedict Arnolds, Carlo, and asks why he took advantage of him when he was away. He asks him one time, did he turn him to the police. Carlo says no. Red tells him that he has to kick in an extra 15% in the future for doubting him.

The woman Henry killed is Betsy Nego, two weeks ago she posted on her social media that she was in recovery for gambling. All of her gambling sites were paid off.

Liz is mad with Ressler, she says she thought they had an agreement, she received documents for him; CIA docs from the Russia desk, some kind of manifest. She tells him that she knows he is looking for her mother and she is not interested in digging this up. Ressler tells her that this was in motion long before they spoke; he throws it in the trash.

At a gambling recovery meeting, the blacklister is there listening to a man pour out his heart that he spent his child’s college tuition. After the meeting, Lady Luck approaches the man, his man is Ned and he was going to commit suicide. She tells him that she knows about everything and if he has the courage to make one more bet, it can solve all his problems.

Red meets with his second Benedict Arnold, his name is Martin. Red asks him the same question, if he turned him into the police. He says no, Red tells him that he knows he has hit big numbers because he made a deal with a cartel and used Red’s network. Red says he is a relatively forgiving man, but that he can’t forgive. He asks Smokey what he should do with Martin. Smokey says he would fire him. Red shoots Martin twice, Smokey looks shocked.

Henry is in the park with his wife. He reveals that he made them square, there is no more debt. He pulls out her grandmother’s ring, he got it from the pawn shop. Ned is there and he is about to shoot Henry, but Ressler shoots Ned and they arrest Henry for murder as his wife is crying and asking what has he done.

Ned and Ressler are questioned, they say Lady Luck knew everything about them and in return for having their debts erased, they do her a favor.

Liz tells the task force it is gamblers killing gamblers. What the killer doesn’t know, they are the next victim. Ressler wonders where the cash supply comes from with Lady Luck.

Lady Luck is with her daughter and her grandson Joey when she gets a call. Ned calls her and tells her that they hit a snag, they make a plan to meet.

Lady Luck is leaving the house to meet Ned, we see her husband but he looks weird, doesn’t talk and there are bundles of cash on a table.

Ned is in a diner, he gets a call from Lady Luck, she says she expected better from him. She knows that diner, and recognizes that the regulars are not there, but lots of new faces; obviously he has been talking to the police. Lady Luck goes to drive away and nobody sees her.

Red is in the plane with Smokey and Dembe. Smokey told him that he didn’t know Martin, if he didn’t know him, then how did he know that he had children. Smokey tries to explain and Red tells him to stop, the only thing worse than a lie is a lie that compounds it. Smokey looks really nervous. Smokey admits he got a call to move drugs, he did what they did, he freelanced. Red says that without Smokey, Martin only had an idea. Red calls him a born con man. Smokey says he will dismantle everything, do anything he asks. Red asks if he ever had a dream that he was flying.

Lady Luck tells her grandson that she is going on a trip, and she wants him to know that what she did, she did out of kindness.

The task force pulled security footage, they find Lady Lucks’ vehicle, her real name is Agathe Tyche and they have her address. She was an upstanding citizen, her husband was a gambler and won 87 million dollars, the largest jackpot in Delaware history. A second child was being born, he husband left to go to a convenience store with the her son, there was an accident, the child died and the father was badly injured. Looks like they found Lady Luck.

Liz and Ressler go to her daughter’s house, she says her mother gave all that money away because it was the day that her brother died and her father was badly injured, he died a few months later. They tell her the truth and ask if she knows where she is gone.

Aram says the husband is not dead, he is collecting social security checks. They have the address both Red and Kessler are headed there.

At home, Agnes is talking to her husband, tells him this is goodbye. The FBI break open the door, She puts down her gun at Liz’s urging and pushes a toaster into the kitchen sink that knocks the power out. Her husband is in some sort of chamber and when the power goes he can’t breathe. Ressler is running to find a breaker.

Cooper tells Agnes’ the truth, all these years her mother kept her father alive and made him suffer. She restored peoples fortunes and kills the gamblers so that other families wouldn’t suffer like hers.

Dembe and Red are walking in the arts building and Red tells him that an example has to be made. Red stays for a show, Agnes tells her daughter that she is sorry, Henry is with Liz and tells her he will reveal anything he knows about Lady Luck – she tells him that she wants to know about the third estate. Kessler is about to tell Liz that he found her mother when she thanks him for letting the case go, we see Smokey is lying beneath a railroad track dead.

Dembe tells Red that it was the wrong example to make. Red says someone turned him in and he wants the person who knows to come forward.

We see Agnes’ daughter, she goes to see her father and tells him that she is taking over the family business.