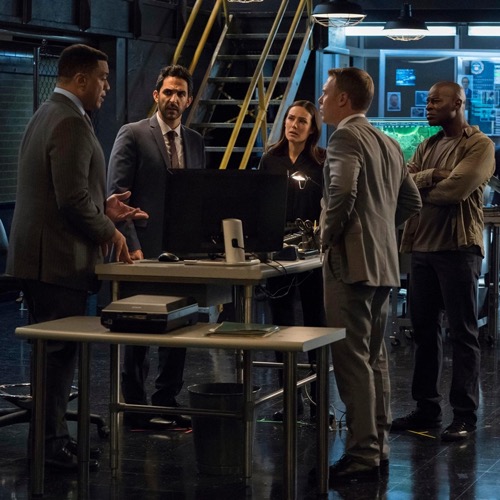 Tonight on NBC their hit drama The Blacklist starring James Spader airs with an all-new Friday, October 11, 2019, episode and we have your The Blacklist recap below. On tonight’s The Blacklist Season 7 episode 2 called, “Louis T. Steinhil: Conclusion”,  as per the NBC synopsis, “Liz, Dembe and the Task Force continue to search for Red. Red attempts to escape his abductors with help from a surprising ally, but discovers he is not Katarina Rostova’s only target in her hunt for information.”

Tonight on Blacklist Raymond is chained up to a fence being drained of blood by Elizabeth’s mother Katarina in Paris, in order to get information from him but he holds out, he asks the nurse who has him hooked up to the drops draining him of blood to help him escape but she declines due to her being afraid.

Katarina blames Raymond for destroying her family, she wants him to tell her who is coming after her but he still holds out she then threatens to go after Dom he pleads with her not too. While Katarina is away the nurse comes back to an almost lifeless Raymond and helps him get down off the fence, as they are in the parking lot she’s stopped by a guard which she shoots and they get into the car.

Keen and Ressler go looking for Louis Steinhill. Raymond calls Zuma and tells him to go protect Dom. While on the road the nurse pulls over to take a tracker out of Raymond’s neck and head over to Doms to warn him of the danger he’s in.

As the nurse, Zuma and Raymond urge Dom to leave it’s revealed Katarina is Dom’s daughter. As Keen and Ressler close in on Steinhill’s location they race to him where he is locked in a room but are out of time as he takes his own life.

The nurse Francesca goes back in the house to let the men know that it was Katarina’s plan all along for the nurse to help Raymond escape to lead her to Dom, she tells them that there is a tracker in her neck and that they are running out of time to escape.

Keen discovers a laptop showing the location of Raymond and the nurse as she discovers the plan. They race to Doms, as Katarina arrives but the nurse continues on with her plan to let Katarina think she’s on her side, she leads the guards into the house, Zuma and her order them to drop their guns a shootout erupts.

Dom is shot they head underground to a shed the nurse tries to save him, Katarina spots where they are hiding and wants Dom to come out, but Keen and Ressler arrive and Katarina disappears.

They race Dom to help at a private location since they must avoid any attention. Raymond asks the nurse to save Dom’s life since the surgeon is too far out Keen opposes this due to her being apart of Katarina plan, but Dom’s lungs are in danger of collapsing any minute, so she puts on her gear and begins to attempt to stabilize him and she succeeded.

Raymond and Ressler discuss what is happening and the danger she may be in telling her that her questions are what got them in this predicament.

It comes to the attention that Steinhill really didn’t kill himself it was staged with the help of an inside agent he has escaped. As Keen returns home Katarina poses as her new neighbor, and Keen has no idea. who she really is.