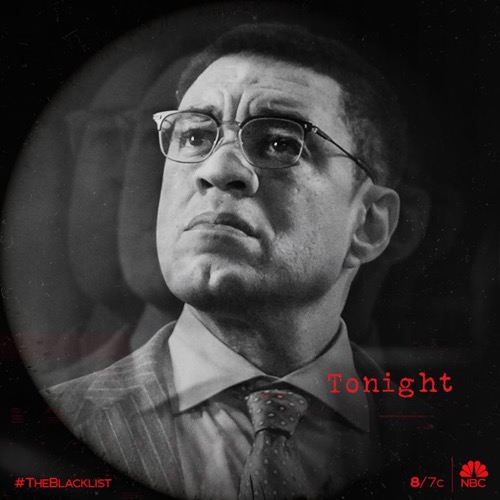 Tonight on NBC their hit drama The Blacklist starring James Spader airs with an all-new Friday, November 22, 2019, episode and we have your The Blacklist recap below. On tonight’s The Blacklist Season 7 episode 8 called, “The Hawaladar”,  as per the NBC synopsis, “Desperate for information on a friend, Red directs the Task Force to find a blacklister specializing in untraceable money transfers. Meanwhile, Liz receives some disturbing news from her daughter Agnes.”

Tonight’s The Blacklist opens with Red and Dembe entering an apartment, guns raised; the place is clear. Red says, “she has him.” Then we see Katarina, she kills a man named Eli in that apartment. Red tells Dembe she has been one step ahead of him every step of the way and what is worse, she has someone that can tell her everything, Dembe needs to find Ilya and he needs to do it fast.

We see Eli, his face is bloody as he shakes off a hood that was covering his head.

Red Goes to see Skip, tells him that Katarina got to Ilya first. Red wants more info – he gets it and tells Dembe to get the jet ready, they are going to London.

Liz is home with Agnes, they are planning a zoo day the next day. Katarina calls Liz and tells her an old friend dropped by, Liz says no problem, go have fun and she will take care of Agnes. Liz tells Agnes she is going to have a play date with Shelly.

Dembe and Red enter a restaurant, two people are playing chess and Arjun is sitting alone. Red sits beside Arjun and tells him that two weeks ago someone from this establishment gave cash payment to a man named Sutherland. The payment was for a woman that he is looking for. Arjun says the payment was requested by New York, they run everything, the whole network. They have 34 outposts in 18 countries all fronted in little restaurants. They make good on financial IOUs.

Liz gets a call from Red, tells her Bhavish Ratnas the next name on the Blacklist. Liz updates the Task Force on what Red told her. Terrorist who wants to make payments to another terrorist goes to a hawaladar, there is no tracing it. All this was run by one man. Cooper sends some of the task force to NY.

Katarina is with her current victim, Eli – she tells him that she would have done anything for him. He was her friend. He tells her that there are things about this that she cannot possibly understand. She says he thinks she is the prey and not the predator, he is wrong. She tells him that she is going to take the answers from him, she invited an old friend to get the answers from him and but tomorrow, he will have told her everything.

Liz, Park, and Ressler are in New York. They are staking out of a restaurant. Ratnas is given some bags from a delivery man, he takes them and walks down the street. Liz notices that there are people around watching Ratnas besides them, he has protection – she suggests they call for support.

Ratnas in the park, he walks by Red who calls him over and tells him that he is the target of an FBI investigation. Red points out Ressler and Park, tells him that he will save him for information, he just needs to get in the limo with Dembe. Ratnas says he has enough security, he doesn’t care. Red tells him that when he is left holding the bag, he is the one that told him so.

The FBI tries to take Ratnas, his security pulls out there guns, but the FBI takes them over. Meanwhile, Ratnas jumps in Red’s car and a man on a skateboard steals the bags that Ratnas was holding.

Red is having tea with Ratnas, tells him he lost money because he hesitated. Red agrees to loan him the three and a half million dollars he lost at 19.5 interest, for information. He goes on to say arranged payment for Skip, on behalf of Constance Druker. Ratnas says yes, two payments and one was to a moving company.

Red calls Glen, tells him to clear his schedule, he has a job for him.

Eli is alone, he is trying to find a way to free himself. He manages to do it.

Cooper is talking to Red, he tells him that he is upset that he played them. Ressler and Liz are there, Red says that he set Ratnas free because he gave him the information that he wanted from him. Red says someone he cares about deeply is missing and he did what he did. Red gives Cooper a lead about Eli.

Beth calls Liz about a picture that Agnes drew, of a dead man in the park. Liz thinks it is because she was watching a TV show and Agnes walked in.

At the bureau, they have a lead. Ressler and Park head to a hospital to see the witness, only to hear gunshots and find a lot of people dead – the witness is gone.

Red is with Glen who is distracted. Red tells him the only thing that matters is to find Orion Relocation Services. Red tells him it is life or death. Meanwhile, Eli did get loose and tried to hang himself with his shoelaces. Katarina finds him and takes him down and asks him why he is willing to die for Red and not to help her.

Liz calls Red and tells him that the witness, Yang is gone. Yang is brought back to his boss who welcomes him back and stabs him in the stomach.

Liz figures out that Yang is undercover Dea and confronts a Dea officer. The man admits, he was the linchpin to the entire place. Liz says if they don’t find them, they are going to kill him. Ressler managed to slip an id badge that could be tracked in one of the men’s pockets that took Yang. It doesn’t take long for them to track it and find Yang, he is bleeding on a table when Liz finds him.

Red is back to see Glen, who says he hasn’t found the company he is looking for. Red is upset, he tells him that he tolerates him and he only exists because he finds things for him and if he doesn’t, he will end this right now.

Agent Yang is alive, he was saved by the task force. Park is upset that Ratnas is helping Red, she tells Cooper that she thinks Red is over his head, has his back up against the wall.

Liz is home with Agnes, asks her about the picture she drew if it is something she saw. Agnes said she saw him in the park.

Katarina gets a knock at the door, it is Liz, she wants to speak to her. Katarina offers to go to her place, Liz shows her the picture. Katarina denies that Agnes has seen anything when they were at the park. Katarina tells Liz she knows she is an FBI agent and maybe that is where she got the image of the dead body. Little does Liz know, Katarina has Elia in her apartment and is about to torture him.

Glen found all the info on Orion Relocating Services, Red tells him that he is in his debt.

The next day, Liz is at the park, she has the drawing of the dead man and walks around. Liz steps in mud and goes to the washroom to wash it off her boot. In the washroom she sees a mirror cracked with blood on it.

Eli is still alive, a man comes into the room, tells him not to be afraid, they are just going to have a little look at his memories.