BY Marcy Cohen on May 21, 2019 | Comments: one comment
Related : Soap Opera, Spoiler, Television, The Bold and the Beautiful 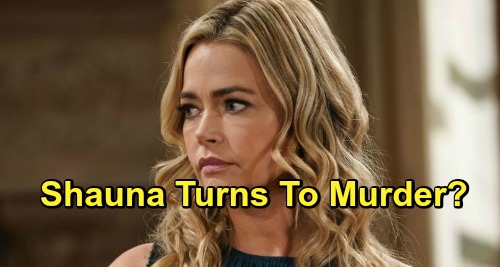 The Bold and the Beautiful (B&B) spoilers tease that some shocking deaths are coming up on the CBS soap. Bradley Bell, B&B’s head writer and executive producer, confirmed that himself during an interview with Michael Fairman. Since we know at least a couple demises are in the works, we should start thinking about what might build to these grisly moments.

It’s certainly possible the baby swap drama could get out of hand and lead to some accidental deaths. However, what B&B really needs is a killer! We’re talking about someone who genuinely snaps and takes a dark turn. Shauna Fulton (Denise Richards) is the perfect character to take in that direction.

Before Shauna’s debut, The Bold and the Beautiful spoilers hinted that Shauna would have major secrets to spill. As of right now, Shauna hasn’t spilled many at all.

You could argue that her claim of Bill Spencer (Don Diamont) being Florence “Flo” Fulton’s (Katrina Bowden) father was one, but that wasn’t even true. Shauna was just as blown away as anyone when Storm Logan (William deVry) turned out to be Flo’s father.

Since there are still some unknowns in Shauna’s history, there may be some far darker secrets buried. After all, Shauna has been eager to hide the truth about Beth Spencer.

She’s determined to protect Flo’s new life, even if it means Hope Spencer (Annika Noelle) is miserable. Shauna is also eager to protect her own advantages as someone who’s connected to the Logans.

In other words, Shauna seems like the kind of person who could go to extremes. Even if she hadn’t resorted to something deadly and drastic before, she might now. Shauna has more to lose than ever.

The Bold and the Beautiful spoilers say Flo could wear Zoe Buckingham (Kiara Barnes) down eventually. She’ll at least convince Zoe to revisit the discussion next week and contemplate revealing the big secret.

If Zoe ultimately decides coming clean is the right thing to do, will Shauna resort to violence? B&B fans know Shauna can handle Flo. That’s her daughter, so she’s used to dealing with her drama and guiding her down the path she wants. Zoe, on the other hand, could be harder to control. If Zoe proves too problematic, Shauna may decide she’s gotta go!

More deaths could come later, but Zoe might be a good first candidate. Do you think Zoe will be killed off? Could Shauna’s dark side take over and drive her to murder? We’ll give you updates as other B&B news comes in. Stay tuned to the CBS soap and don’t forget to check CDL often for the latest Bold and the Beautiful spoilers, updates, and news.