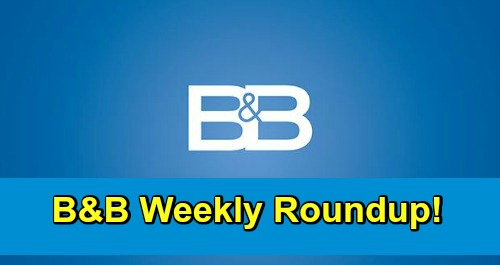 The Bold and the Beautiful (B&B) spoilers and our weekly news roundup reveal that we’ve got a B&B news roundup to pass along. There’s been some hot buzz swirling in the soap world, so it’s a good idea to stay in the loop! Luckily, we’ve got you covered with all the latest updates. Let’s dive in and talk about some of the excitement.

First, we should discuss a return appearance. Kelleth Cuthbert became quite the sensation after becoming the Golden Globes Fiji water girl. She later showed up on B&B as a model named Raine. It turns out Cuthbert came back to The Bold and the Beautiful, but she played a different character this time. Cuthbert was a temp worker in the episode which aired Friday, March 29.

In other B&B news, the show put out a casting call for some blonde babies. They need girls who are six months old and they’re not too picky about how many come in the set! Twins or triplets would probably be ideal, but The Bold and the Beautiful will also accept babies flying solo. This could point to aging “Phoebe Forrester” (Isabella de Armas and Redford Prindiville) aka Beth Spencer a bit.

Nicola Posener plays “Phoebe” and Kelly Spencer’s (Chloe Teperman and Zoe Pennington) nanny on B&B. She recently revealed that Amelia has some new scenes in the works. On Instagram, Posener posted a pic of herself along with a fun caption. She said, “Ready for more B&B antics this week working with the wonderful folks at CBS…‘tis gonna be another dressing room selfie for ya ‘til these air!!”

Does that mean we’ll get a glimpse of Amelia in Paris with the girls? Could she take a call for a busy Steffy Forrester (Jacqueline MacInnes Wood)? Whatever the case, The Bold and the Beautiful spoilers say there could be a few signs of life in that storyline.

Of course, Wood is still on maternity leave and certainly seems to be enjoying motherhood. On a recent Instagram story, Wood shared that her newborn son, Rise, is already over three weeks old! He’s growing up fast, so we’ll look forward to more pics of his milestones.

That’s it for your B&B news roundup. We’ll give you updates as other details emerge. Stay tuned to the CBS soap and don’t forget to check CDL often for the latest Bold and the Beautiful spoilers, updates and news.

Ready for more B&B antics this week working with the wonderful folks at CBS! 🎬 ….’‘tis gonna be another dressing room selfie for ya ‘til these air!! 🤓☝️#BoldAndBeautiful