BY Heather Hughes on February 26, 2019 | Comments: one comment
Related : Comings & Goings, Soap Opera, Spoiler, Television, The Bold and the Beautiful 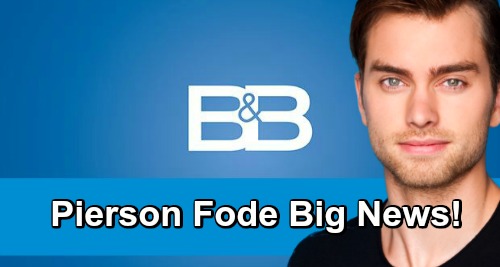 The Bold and the Beautiful (B&B) spoilers tease that one CBS soap alum has a big project in the works. Soap fans know Pierson Fode from his days playing Thomas Forrester, but he eventually left to pursue other projects. The part of Thomas will be played by Matthew Atkinson (ex-Austin Travers on The Young and the Restless) starting March 14, so Fode won’t be returning to B&B’s world of fashion.

Instead, Fode is joining another fashionable series – although his character’s style is described as a bit more Wall Street than runway ready! He’s booked a fascinating new CW pilot called Glamorous, which has some big names attached.

For starters, Eva Longoria will serve as this pilot’s director and executive producer. Damon Wayans Jr.’s Two Shakes Entertainment is behind this exciting drama along with CBS TV Studios. Jordon Nardino serves as the writer of this pilot, which could be picked up for a full season if all goes well. Wayans Jr. and Nardino will join Longoria in taking executive producer credits.

According to Deadline, “Glamorous centers on a gender-nonconforming recent high school graduate who lands the gig of a lifetime interning at a cosmetics company whose products he panned on YouTube.”

That’s certainly an intriguing premise and the characters involved are as just as intriguing. Ben J. Pierce has been cast as Marco, the gender-nonconforming intern we just mentioned. Brooke Shields also stars as Madolyn, a former supermodel turned cutthroat cosmetics CEO.

That brings us to Fode’s character. Chad is described as “an ambitious alpha male who works at the cosmetics company his mother founded, styling himself as her heir apparent. While openly gay, Chad is buttoned down and unsophisticated,” so his personality and wardrobe don’t quite reflect the glam world he lives in.

It’s great that Fode’s out there booking hot gigs and finding primetime success. Many B&B viewers will miss Fode as Thomas, but we should all give Atkinson a chance to make the part his own. The Bold and the Beautiful spoilers say Thomas will bring some drama back to town with him, so stay tuned.

The secret is out! I couldn’t be more happy to finally announce what I’m working on! #Glamorous
Huge congrats to @Miss_Benny ✨ excited to work together! pic.twitter.com/Lr4uffQFWz