BY Heather Hughes on January 24, 2019 | Comments: one comment
Related : Soap Opera, Spoiler, Television, The Bold and the Beautiful 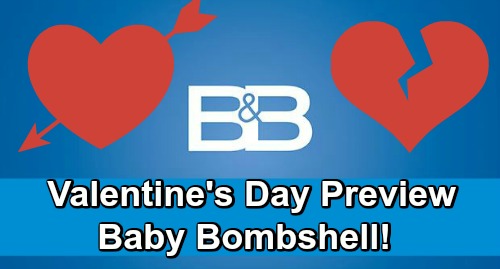 The Bold and the Beautiful (B&B) spoilers tease that a very romantic holiday is coming up and several characters will celebrate it. Of course, we’re talking about Valentine’s Day. B&B always likes to bring some hot moments for your favorite couples. They tend to pack a sentimental punch, too.

However, Valentine’s Day will be pretty blue for a handful of familiar faces. For every bursting heart, there’ll be one that’s breaking. We’ve got a preview of all the action ahead, so let’s dive in and see what Valentine’s Day will look like on The Bold and the Beautiful.

For starters, let’s talk about some happy campers. Wyatt Spencer (Darin Brooks) and Sally Spectra (Courtney Hope) recently said the “L” word to each other. Now that they’ve declared their love, it should make this Valentine’s Day extra special. Naturally, Sally and Wyatt will do what they do best on this romantic occasion. They’ll head to the bedroom to make their evening as steamy as possible.

Xander Avant (Adain Bradley) and Zoe Buckingham (Kiara Barnes) will also heat things up, but they’ll still manage to make themselves useful. The Bold and the Beautiful spoilers say Zoe will grow increasingly concerned about her father. Dr. Reese Buckingham’s (Wayne Brady) behavior will bring loads of suspicions, so Zoe will be determined to get to the bottom of this.

Zoe will encounter Florence aka “Flo” as well, so that’ll only add to her questions. She’ll realize there’s a puzzle to solve, so she’ll recruit Xander to help. You can bet Xander would much rather focus on the sexy side of Valentine’s Day. He probably won’t get to spend as much time in bed as he would like, but at least he’ll have a mystery to keep him busy.

While Zoe and Xander start an investigation, Katie Forrester (Heather Tom) will plan a big surprise. She’ll hope to make Thorne Forrester (Ingo Rademacher) see how much she cares about him, but she’s the one who’s in for a shock. The Bold and the Beautiful spoilers state that Thorne will drop a bomb before Valentine’s Day winds down.

Since we know Rademacher is leaving the show, that means Thorne is being written out. There’s a good chance we’ll see the first sign of that with his bombshell. It’s possible Thorne’s doubts about his marriage will grow between now and then. He might tell Katie that he wants a divorce, but that seems awfully cruel on Valentine’s Day!

It’s also possible Thorne will reveal he’s leaving the country for a while. He might be needed at an overseas Forrester Creations office. Ridge Forrester (Thorsten Kaye) might insist that there’s some crisis only Thorne can tackle.

A long-distance relationship would be the kiss of death for “Thatie.” With Bill Spencer (Don Diamont) around to provide temptation, Katie’s marriage vows wouldn’t hold up for long. Next, Steffy Forrester (Jacqueline MacInnes Wood) will likely spend Valentine’s Day doting on her girls. Since the adoption will be official at that point, we can already envision the sisters in pink and red outfits.

That brings us to poor Hope Spencer (Annika Noelle) and Liam Spencer (Scott Clifton). They definitely have a rough Valentine’s Day ahead of them. The Bold and the Beautiful spoilers say they’ll spend it grieving and comforting each other instead of revving up the romance. As time goes on and Liam heals before Hope, their marriage could face even more struggles.

It sounds like B&B fans won’t want to miss Valentine’s Day this year. We’ll give you updates as other news comes in. Stay tuned to the CBS soap and don’t forget to check CDL often for the latest Bold and the Beautiful spoilers, updates and news.