BY Heather Hughes on August 12, 2019 | Comments: one comment
Related : Soap Opera, Spoiler, Television, The Bold and the Beautiful 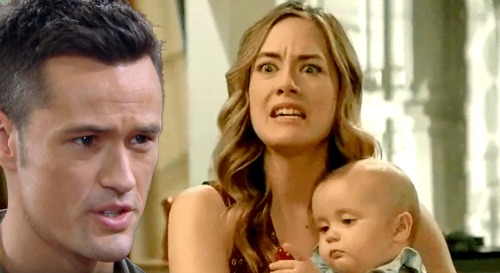 The Bold and the Beautiful (B&B) spoilers tease that things should be pretty strained between Hope Forrester (Annika Noelle) and Steffy Forrester (Jacqueline MacInnes Wood) for a while. Taking Steffy’s daughter away isn’t something that Hope wants, but the fact is she’s not Steffy’s daughter at all. “Phoebe Forrester” is really Beth Spencer (River Davidson and Madeline Valdez), which means the blow must be dealt.

Steffy’s loved ones will reach out to her in the weeks ahead, but she may have to work through her emotions on her own. She’ll be bitter and broken, but there’s light at the end of the tunnel. The situation will just have to get worse before it gets better – and Thomas Forrester (Matthew Atkinson) may be the one who makes it worse!

During the week of August 19-23, Thomas will decide on a tactic to get Hope away from Liam Spencer (Scott Clifton) permanently. That may involve trying to kill Liam, but it’ll likely involve going on the run with Hope, too. That was Thomas plan at one point, so it looks like he’ll revisit it. However, we have to remember Thomas’ overall goal here. He wants Hope to love him back.

Hope can’t do that if she’s focused on how much she misses Beth, so it’s reasonable to assume Thomas will swipe the baby, too. Will Beth inadvertently land in danger thanks to Thomas’ decision? Dr. Jordan Armstrong (Vincent Irizarry) will debut as part of the baby storyline on August 26. That’s shortly after Thomas’ decision about getting Hope away from Liam forever.

Beth might get deathly ill while she’s a hostage. Could Hope plead with Thomas to let them get Beth to the hospital? She certainly won’t want to lose the daughter she just found out survived! This could perhaps give Thomas a glimmer of humanity again.

If Thomas puts his own twisted agenda aside for Beth’s sake, maybe it could provide the first step toward redemption. Some B&B fans don’t think it’s possible, but anything is possible on a soap. The Bold and the Beautiful may try to save Thomas’ destroyed character and rebuild with psychiatric help.