The Bold and the Beautiful Spoilers: Bill Doesn’t Want Wyatt Back With Flo – Supports Son’s Relationship With Sally 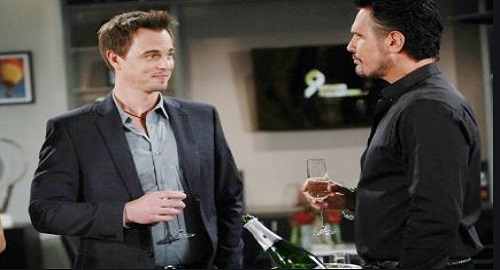 The Bold and the Beautiful spoilers tease that Wyatt Spencer (Darin Brooks) will be faced with an interesting situation. He’s currently engaged to Sally Spectra (Courtney Hope) and the two are thrilled to be officially back together as a couple. But he’s also recently learned that Flo Fulton (Katrina Bowden) did something amazing that put her a little closer to redemption in his eyes – she donated her kidney to save Katie Logan’s (Heather Tom) life.

Well, Wyatt was pretty impressed with Flo’s actions. While he certainly doesn’t feel that he could ever take Flo back after what she did to Hope Logan (Annika Noelle) and Liam Spencer (Scott Clifton), he does feel that he at least is getting back a glimpse of the “old Flo” that he used to know and love. The whole kidney donation situation has in many ways redeemed Flo in Wyatt’s eyes and at least shown him that Flo is still a good person with a good, generous heart.

But it seems that after the dust settles a little bit from Katie’s transplant surgery, Bill Spencer (Don Diamont) is going to want to talk to Wyatt about his love life. Of course, Bill surely knows that Wyatt asked Sally to marry him, which might have caused some mixed feelings. After all, Bill and Sally haven’t always gotten along well, and Sally actually threatened to shoot Bill in the past. Clearly, if Bill had his druthers, he’d probably not choose Sally for Wyatt.

But there’s a wrinkle here, and that concerns Flo. Once Bill finds out about Flo being Katie’s kidney donor, he’ll probably hit the roof. We imagine that he’d have a similar reaction as Brooke Forrester (Katherine Kelly Lang) did – he’ll likely be grateful that Katie’s life was saved but still really peeved about what Flo did to his granddaughter Beth Spencer (River Davidson and Madeline Valdez). It’s really hard to imagine Bill just up and forgiving Flo for everything she did with respect to Beth.

And because of that, Bill will probably want to impress upon Wyatt the importance of him not forgiving Flo for her misdeeds just because she coughed up a kidney for Katie. Bill may worry that Wyatt will go running back to Flo due to her sacrifice, and he’ll probably want to tell Wyatt in no uncertain terms that this would be a mistake. B&B spoilers indicate that Bill will soon have a big talk with Wyatt about Sally and Quinn Forrester (Rena Sofer), indicating that he may have some ideas for how Wyatt might bridge the gap between them.

This would make sense if indeed Bill is thinking about Quinn’s strong desire for Wyatt to end up with Flo again. Bill may want to counteract Quinn’s influence and stress to Wyatt just how important it is to the family that he doesn’t go back to the woman who helped steal Beth and place her in Steffy Forrester’s (Jacqueline MacInnes Wood) home. Bill might suddenly become “team Sally” just to keep Wyatt away from horrible Flo!

At any rate, it looks like we could end up with a situation where Wyatt’s getting pushed by Quinn to get back together with Flo while simultaneously being pushed by Bill to stay with Sally. In an interesting turn of events, Bill and Sally could actually be on the same side of an issue for once and actually team up to make sure that Wyatt doesn’t go soft on Flo again.

What do you think? Will we finally see Bill on “team Sally?” Stay tuned to the CBS soap and don’t forget to check CDL often for the latest Bold and the Beautiful spoilers, updates, and news.