BY Sean O'Brien on April 7, 2019 | Comments: one comment
Related : Soap Opera, Spoiler, Television, The Bold and the Beautiful 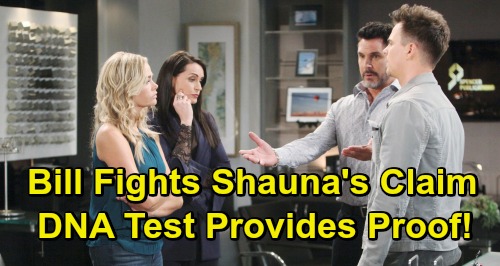 The Bold and the Beautiful spoilers tease that Shauna’s (Denise Richards) recollections may, or may not be misguided. In either case, Bill (Don Diamont) will fight any perceived shakedown request regarding his supposed daughter.

Flo (Katrina Bowden) arrived in Los Angeles as Reese’s (Wayne Brady) personal friend. She was revealed to have met him in Las Vegas, Nevada, which established Dr. Buckingham’s gambling addiction backstory as a lead-in to the still evolving Beth-is-Phoebe baby tale.

B&B fans didn’t know that Reese was actually a character vehicle that was being used to introduce Flo. Bowden has become a regular cast member, whereas Brady is recurring.

It became apparent that bigger plans were head for Bowden’s alter ego as soon as Flo and Wyatt (Darin Brooks) recognized each other. Flo recently told to her former high school sweetheart that she never learned who her father was, which followed Wyatt’s tell about Bill being his dad. Mention of her mother’s resistance to the paternity information added to the intrigue.

So, Shauna’s link to Quinn (Rena Sofer) was introduced. Readers of this comprehensive soap site weren’t surprised to learn about the Shauna-Quinn connection, as they learned about Richards’ cast inclusion in recent weeks.

Miss Fulton was totally thrown when Quinn mentioned who Wyatt’s father was. Shauna apparently believes that she and Bill were together, once, years ago and that Flo is his child.

Bill’s nice side has been fully evidenced in recent months. A true, deep, and meaningful recognition of all he’d done wrong happened awhile after the Steffy (Jacqueline MacInnes Wood) obsession waned. Bill’s perspective was welcomed by all, including Quinn, who recently mentioned that an occasional glimpse of a human being can sometimes be seen within the Spencer Publications head.

Whether Shauna’s memory is simply off, she’s seeking money, as Bill suspects, or whatever, B&B can’t possibly have Flo and Wyatt be related. So this part of Flo’s paternity search is probably one chapter in the overall developing storyline.

However, this is soap opera land. So, daytime fans could hedge their bets. Yes, that was a purposeful Vegas reference, though not intended as a swipe at Reese, who’s trying to live a better life somewhere in England.

The only way B&B could prove Bill wrong would be if Shauna is right, but Wyatt is also retroactively revealed as some other man’s son. That would be epic and deliver even more than initially seemed intended. Only a DNA test will provide the needed proof and that is on tap for this week’s new B&B episodes, April 8-12!