The Bold and the Beautiful Spoilers: Brooke in Deadly Danger, Targeted by Vengeful Thomas – Hope Setback Leaves Him Unhinged? 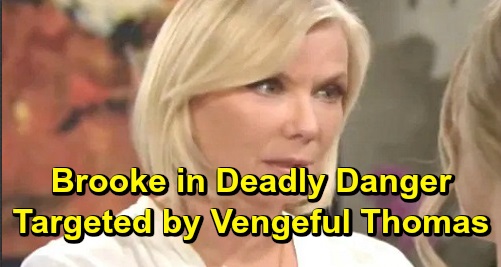 The Bold and the Beautiful (B&B) spoilers tease that Thomas Forrester’s (Matthew Atkinson) recent fantasy could offer some hints about what’s ahead. Of course, no one but Thomas could ever buy that rosy world. His version of a perfect life with Hope Logan (Annika Noelle) just isn’t going to happen.

That doesn’t mean Thomas will never be paired with Hope, but it does mean that Thomas is still delusional about what he’s expecting. In the episode that aired December 13, Thomas imagined his bright future. In this fantasy, Hope was madly in love with him and was the only Logan left. She was rather blasé about Brooke Forrester’s (Katherine Kelly Lang) untimely death and gushed over Thomas being the toast of the fashion world.

This is interesting since Thomas’ fantasy offers a look at his deepest, darkest desires. Thomas was a big success as a designer. Liam Spencer (Scott Clifton) was back with Steffy Forrester (Jacqueline MacInnes Wood). Ridge Forrester (Thorsten Kaye) was with Shauna Fulton (Denise Richards). Thomas was happily raising Douglas Forrester (Henry Joseph Samiri) with Hope, who was eager to talk about how right her husband was. “Everything happened the way you said it would, Thomas.”

However, we can’t ignore one very significant detail: Brooke was DEAD! Clearly, that would be Thomas’ preferred outcome. Could this be a hint about some deadly trouble that’s brewing? The creepy music sure seemed like an indication that it could happen. At the end of his fantasy, Thomas was grinning to himself – obviously enjoying the thought of Brooke being gone and everything going according to plan.

Thomas may not have murder on his mind right now, but he could be pushed that far. We’ve seen that Thomas is capable of just about anything. The Bold and the Beautiful could take Thomas in an even crazier direction if he faces another setback with Hope. If Liam and Steffy’s plan to expose Thomas’ continued scheming works, it could lead to Thomas coming unhinged.

Brooke has been the one shouting from the rooftops that Thomas is dangerous, so he may decide to prove her right. There’s been some B&B buzz out there about a story involving Thomas and a gun, so that’s something to keep in mind! It’s easy to imagine Thomas finally snapping and trying to kill Brooke, which could set up some professional help for his apparent issues.

Brooke surely won’t die, but she could end up fighting for her life in the hospital. Do you think Thomas will try to kill Brooke? Will he completely lose it and seek deadly revenge? Following his fantasy, Thomas did say “Goodbye, Brooke. Hello, Happiness.” He might determine that if Brooke’s out of the picture, he can still fix things despite the Hope setback. Anything can happen with a character like Thomas!