BY hellodrdavis on November 5, 2019 | Comments: 2 comments
Related : Soap Opera, Spoiler, Television, The Bold and the Beautiful 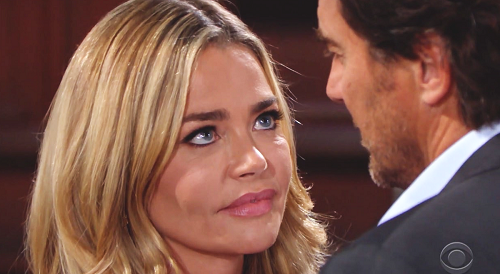 The Bold and the Beautiful (B&B) spoilers has some great news to pass on about a popular B&B star. Denise Richards, who portrays Shauna Fulton on the CBS soap, has signed on for an extended run on the show. That’s great news for B&B fans who are loving the chemistry between Denise and Thorsten Kaye, who portrays Ridge Forrester on the show.

Richards originally came on the show for a three-month stint, but as she recently told Soap Opera Digest, she then told Executive Producer Brad Bell that she’d like to stay.

“I was so touched at how welcoming everyone was,” she said, regarding her fellow cast members. “I’ve said this to everyone that it starts at the top, and things roll down from there. It’s an amazing environment to work in.” Richards is also having a great time playing Shauna.

“And I get such a delicious character that’s fun to play,” Richards continued. “I love that Shauna is now getting involved with more characters on the show…I think that Brooke’s met her match. Shauna is not afraid of her and won’t back down. It’s always fun to play characters where you can push the envelope.”

And regarding her chemistry with Thorsten Kaye, Richards said the following: “I love him. He’s the best. I feel like he’s my dance partner. I can play ball with him. If there are some things that we want to add, we’re not thrown by one another. We listen to each other as actors.”

So, what does this all mean as far as B&B storylines go? Well, for one, it looks like we’ll be seeing more of Ridge and Shauna together. And that can only mean one thing – more trouble for Brooke Forrester (Katherine Kelly Lang) and Ridge going forward. As B&B viewers know, “Bridge” have been facing some very serious marital problems lately, and Ridge has needed somewhere to turn.

Ridge Forrester Will Open Up Even More To Shauna Fulton

That someone has been Shauna, and according to B&B spoilers, Ridge will be opening up more to Shauna in the near future, as he finds himself in need of someone to talk to about the problems in his marriage and his fears that Brooke and Hope Logan (Annika Noelle) are plotting to take Douglas Forrester (Henry Joseph Samiri) away from Thomas Forrester (Matthew Atkinson).

Of course, at this point, Brooke really doesn’t know about all of the time that Shauna and Ridge have been spending together. But one can only imagine what her reaction will be if she finds out about all the support that Ridge is getting from Shauna. We could see another Brooke/Shauna showdown in the future, which would delight many fans.

Are you glad that Shauna is sticking around B&B? Do you think Ridge will wind up with Shauna and Brooke will be destroyed?  Stay tuned to B&B and don’t forget to check CDL often for the latest Bold and the Beautiful spoilers, updates, and news.