The Bold and the Beautiful Spoilers: Douglas Faces Uncertain Fate, Thomas An Unfit Father – See Who Could Raise Him

BY hellodrdavis on August 10, 2019 | Comments: one comment
Related : Soap Opera, Spoiler, Television, The Bold and the Beautiful 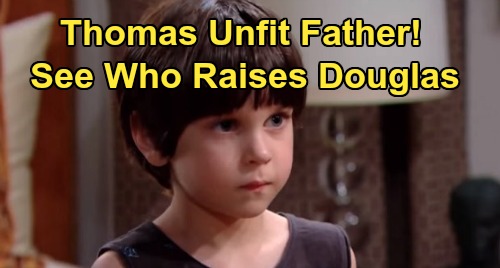 The Bold and the Beautiful spoilers tease that Thomas Forrester (Matthew Atkinson) is going to be in a world of trouble. As B&B viewers know, he’s been off canvas since the big reveal about Beth Spencer (River Davidson and Madeline Valdez) being alive, and it’s a good thing for him. He’s facing some serious backlash from his family and quite possibly some legal action.

According to B&B spoilers, Thomas will turn up again, when it’s revealed that he’s in hiding with his old pal Vincent Walker (Joe LoCicero). That’s the same guy who provided Thomas with the drugs that he used on Liam Spencer (Scott Clifton) to get him to sleep with Steffy Forrester (Jacqueline MacInnes Wood), so that’s going to be trouble. Vincent certainly isn’t going to help Thomas start suddenly making good decisions.

From here, B&B spoilers say that Thomas will continue to obsess over Hope Logan (Annika Noelle), and that he’ll try to devise a way to get her separated from Liam…which just doesn’t sound good. We might be looking at an attempt on Thomas’ part to kidnap Hope, which would just dig his hole even deeper.

Throughout all of this, though, one has to wonder whether Thomas has given his son Douglas Forrester (Henry Joseph Samiri) a second thought. As B&B viewers know, Thomas left Douglas in Steffy’s care, then took off on his staycation honeymoon with Hope, during which he ended up fleeing. While he’s away and obsessing over Hope, will he even be thinking about Douglas?

And does Thomas even realize at this point that one of the consequences of his actions could be that he loses his son? Thomas didn’t just lie and keep a secret – he deliberately tried to run someone off the road, and that person ended up crashing and dying. And if Thomas does decide to kidnap Hope, then that will be another criminal count to add to the list.

We also have to remember that Thomas was totally inappropriate with Douglas after Douglas found out the Beth secret. Thomas threatened him and even physically grabbed him at one point. If Douglas spills those beans, then his family – and possibly even the authorities – may want to take a close look at whether Thomas is an unfit father.

It’s a terrible thought, but Douglas may need to be raised by someone else for a while, but who should that be? His mother Caroline Spencer (Linsey Godfrey) is gone, so he’d most likely to go to a family member – he could possibly go to grandpa Ridge Forrester (Thorsten Kaye), or even to Hope and Liam, since Hope already feels a strong connection to the little boy.

Of course, there’s always Steffy as well – she could certainly care for Douglas while her brother gets treatment or serves jail time, if that ultimately happens. Time will tell what happens with Thomas and Douglas, but it certainly seems like Douglas will need to go somewhere while Thomas recuperates and/or gets incarcerated.

Who do you think should care for Douglas while his father gets his life straightened out? Stay tuned to the CBS soap and don’t forget to check CDL often for the latest Bold and the Beautiful spoilers, updates, and news.