The Bold and the Beautiful Spoilers: Douglas Paternity Shocker – Ridge Is Bio Dad After All – Huge Twist Looms in Thomas Story?

BY Heather Hughes on October 26, 2019 | Comments: one comment
Related : Soap Opera, Spoiler, Television, The Bold and the Beautiful 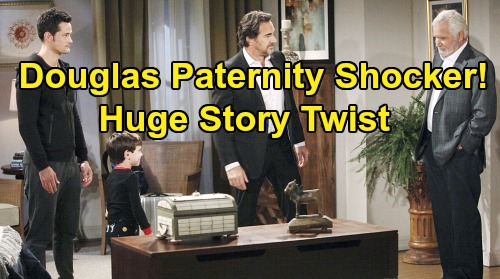 The Bold and the Beautiful (B&B) spoilers tease that Thomas Forrester (Matthew Atkinson) will face a battle between his head and his heart. Hope Logan (Annika Noelle) knows she can use Thomas’ lingering love to her advantage, so she’ll try some new manipulation tactics in the coming weeks. Of course, it’s tough to manipulate a master manipulator! Part of Thomas should know exactly what Hope’s doing.

At the same time, Thomas will enjoy having Hope’s attention again. His obsession will creep back in, which always leads to trouble. Thomas does dark and dangerous things when he gets in the wrong mindset. He’s capable of some pretty sinister activities when he’s doing whatever it takes to get what he wants.

Ridge Forrester (Thorsten Kaye) has been fighting hard to make sure Thomas gets a second chance. He doesn’t want to see Thomas punished for his mistakes forever. Unfortunately, Ridge seems poised to eat crow eventually. He may have to accept that Thomas is more messed up than he thought.

Here’s where B&B could really make this interesting. The Bold and the Beautiful spoilers say a shocking twist is coming up in Thomas and Hope’s storyline. It’s something that’ll be quite unexpected for fans. This could tie in with the upcoming death of a major character, but that sounds more like a consequence than a twist. Regardless, it’s worth considering other options for this big bombshell.

Ridge has been adamant that Douglas Forrester (Henry Joseph Samiri) is better off with his own flesh and blood, not Hope and Liam Spencer (Scott Clifton). Thomas is certainly Douglas’ flesh and blood, but so it Ridge. Could Ridge be Thomas’ father after all?

Ridge initially tried to pass Douglas off as his own kid with Caroline Spencer (Linsey Godfrey), but Thomas later found out about it. Although Ridge thought it was pretty much impossible for him to father a child, we all know nothing is impossible in the soap world! When Matthew Atkinson was first hired as a Thomas recast, he dropped some potential hints in an interview with Soap Opera Digest.

Atkinson talked about Caroline and touched on Thomas’ complicated relationship with Ridge. “So, who knows? There may be some deep, dark secrets that are going to come to light,” Atkinson said. He added that there are “a lot of emotions to be explored” when it comes to Ridge and Thomas. It’s possible Atkinson was given some teasers on what might be coming down the line.

Whatever the case, Thomas hasn’t turned from his wicked ways and may be poised to exit sooner or later. They can only let Thomas go to such a sinister place so many times. If they kill Thomas off or send him to prison at some point, it’d make sense to reveal Ridge as Douglas’ true bio dad. Perhaps that revelation could even be what sends Thomas over the edge!