BY hellodrdavis on June 24, 2019 | Comments: one comment
Related : Soap Opera, Spoiler, Television, The Bold and the Beautiful 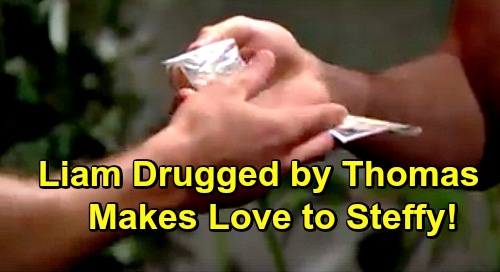 The Bold and the Beautiful spoilers tease that Liam Spencer (Scott Clifton) will soon become the next victim of Thomas Forrester’s (Matthew Atkinson) devious manipulations. Thomas has manipulated Hope Logan (Annika Noelle) into ending her marriage, and he just caused Emma Barber’s (Nia Sioux) tragic death. You might think he’d give it a rest already, but no.

Thomas won’t be satisfied until he has Hope all to himself and Liam is completely out of her heart and mind. But right now, Hope wants to “take it slow,” and that won’t do for Thomas. In his warped mind, he needs Hope and he needs her now – and that means that he needs to find a way to get her to move on from Liam.

Well, according to B&B spoilers, Thomas will decide that the best way to get Hope to move on from Liam is to ensure that Liam moves on with Steffy Forrester (Jacqueline MacInnes Wood). As B&B viewers know, Liam has moved in with Steffy, but he’s currently staying in the guest room and everything’s completely platonic.

So, how could Thomas possibly get Liam and Steffy together? Look for Thomas to turn to Vincent Walker (Joe LoCicero), his old friend with shady connections, for assistance. The Bold and the Beautiful spoilers say that Thomas will purchase some sort of drugs from Vincent, and he’ll plan to use them on Liam.

It seems that Thomas will slip the drug to Liam somehow, and Liam’s resulting behavior will cause a chain of events to transpire that will change lives forever. B&B spoilers say that Hope will notice Liam’s “intense” behavior, and that this will play right into Thomas’ plan. It sounds like Liam will be behaving very strangely toward Hope, and she might be put off by it.

But the drugs will also lead to some additional behavior on Liam’s part that will send shockwaves. According to B&B spoilers, Liam and Steffy will end up making love while Liam is under the influence of the drugs. Of course, Liam won’t be in full control of his behavior, so this probably isn’t something he would do if not for the drugs.

At any rate, it looks like some serious “Steam” passion will erupt, and B&B spoilers say that Liam will wake up the next morning confused. He’ll try to process the events of the previous night, but since he won’t know that he was drugged, he’ll struggle to understand why he slept with Steffy. It will be a real mess.

And it will all get messier when a guilty Liam makes the decision to tell Hope about his night with Steffy. The news will surely distress and anger Hope, who will probably think that it’s awfully soon after their annulment for Liam to be moving on in such an intimate way with Steffy. It will likely make Hope realize that she needs to move on, too.

And so it looks like Thomas’ plot will produce the desired effects – Steffy and Liam will be closer, and Hope will be pushed to move on with her own life, with Thomas right there as the person she can move on with. Do you think that Thomas will ever get caught for drugging Liam? Stay tuned to the CBS soap and don’t forget to check CDL often for the latest Bold and the Beautiful spoilers, updates, and news.