The Bold and the Beautiful Spoilers: Emma Returns to B&B Just Before Death Strikes – Beth Discovery Brings Her Gruesome End? 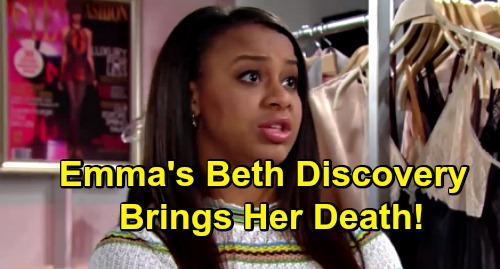 The Bold and the Beautiful (B&B) spoilers tease that suspicions will be raised once again starting June 19. That’s because Emma Barber (Nia Sioux) is headed back to B&B, and she’ll immediately pick up on the tense vibe of her coworkers. Emma will definitely have questions, which could bring major risks and shocking consequences.

Xander Avant (Adain Bradley) will desperately want the truth to come out over the next couple weeks. Unfortunately, he’ll be overruled by Thomas Forrester (Matthew Atkinson). The Bold and the Beautiful spoilers say Thomas will use harsh threats to keep Xander in line. He’ll also rely on Zoe Buckingham (Kiara Barnes) to control her boyfriend.

Florence “Flo” Fulton (Katrina Bowden) will obviously remain caught in the middle of all this. The mess is only going to get messier once Emma’s poking around. They say curiosity killed the cat, but will it kill Emma as well? We can’t help but notice the terrible timing of her return. Emma’s coming back on the scene right before a gruesome demise is set to strike.

The Bold and the Beautiful spoilers say someone will die during the week of June 24-28. As CDL reported, thanks to a script posted in Katherine Kelly Lang’s (Brooke Forrester) Instagram story, we know Xander, Zoe and Thomas will be featured in an early July episode. Of course, it’s possible Xander or Zoe could be featured as a corpse or in new flashbacks that fill in the blanks surrounding this death.

However, it’s equally possible they’ll be alive and well along with Flo. There’s no way B&B’s killing off the fake birth mom in this story, so it’s safe to assume Flo will be fine. Since Emma arrives mere days before this demise happens in late June, maybe we should be worried about her! Will she realize Beth is still alive and decide to tell the truth? Will Zoe or perhaps Thomas take drastic action to stop her?

This may or may not be a full-blown murder. A confrontation that gets out of hand seems more likely. That way B&B can preserve the characters a bit more and potentially redeem them down the line. It’s hard to come back from killing someone in cold blood, so this death may be an accidental one.

Regardless, we now have a new character on the death watch list. Could Emma face a grim fate over a new discovery? We’ll give you updates as other B&B news comes in. Stay tuned to the CBS soap and don’t forget to check CDL often for the latest Bold and the Beautiful spoilers, updates and news.