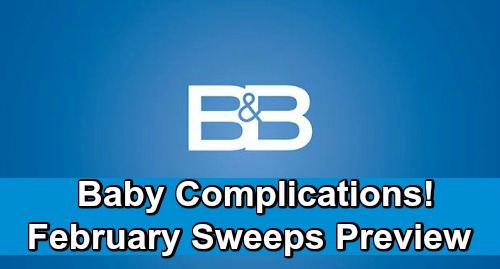 The Bold and the Beautiful (B&B) spoilers tease that some big stories are about to heat up. February sweeps is almost upon us and that means it’s time for the CBS soap to bring even more drama. We’ve got a sneak peek at all the excitement, so let’s dive in and see what’s happening with your favorite characters.

For starters, we have to talk about the storyline everyone’s buzzing about. Steffy Forrester (Jacqueline MacInnes Wood) is in the process of adopting a baby, but not just any baby. Dr. Reese Buckingham (Wayne Brady) admitted he took a gamble on Catalina Island, so between that and the suspicious circumstances surrounding Beth Spencer’s birth – it’s clear this is the same kid.

Nevertheless, Steffy will remain clueless as she welcomes little Phoebe Forrester (Rosalind Aune and Isabella De Armas) home. After the adoption is finalized, Steffy will be free to enjoy her family during February sweeps. She’ll be thrilled to have Phoebe by Kelly Spencer’s (Zoe Pennington and Zoe Teperman) side. However, this adoption will undoubtedly strain Hope and Liam Spencer’s (Scott Clifton) marriage.

The happier Steffy becomes, the more Hope may resent her for it. Even if Hope doesn’t admit it, you can bet she’ll be jealous. The Bold and the Beautiful spoilers say Hope and Steffy’s relationship will become more complicated than ever. That should add to “Lope’s” marriage woes, so look for this couple to head downhill fast.

Thorne Forrester’s (Ingo Rademacher) marriage to Katie Forrester (Heather Tom) will also take some serious hits. As she grows closer to Bill Spencer (Don Diamont) again, Thorne won’t feel like he’s the right husband for Katie anymore. Rademacher taped his final episodes in January, so we could see a “Thatie” divorce and Thorne departure before February sweeps wraps up.

Meanwhile, Emma Barber (Nia Sioux) will get sneaky. She took a step back and let Zoe Buckingham (Kiara Barnes) have Xander Avant (Adain Bradley), but it turns out it may have been a long-game strategy. Emma will stay focused on the ultimate goal, but Xander’s absence could be an issue. Bradley took some time off from B&B to shoot a movie, so he shouldn’t be around much this February.

Of course, that could give Emma and Zoe more opportunities to face off. Zoe will have to deal with her dad’s growing problems, too. The Bold and the Beautiful spoilers say part of Reese’s past will come back to haunt him. Perhaps Reese will no longer be able to hide his gambling problem, which could become a surprising issue in his romance with Dr. Taylor Hayes (Hunter Tylo).

Speaking of Taylor, her mind will drift back to Bill’s shooting. The Bold and the Beautiful spoilers hint that we could see some huge twists in that storyline. Did Taylor really shoot Bill? February sweeps will bring some bombshells, so Taylor’s memory may not be all it’s cracked up to be.

It sounds like some great material’s on the way. We’ll give you updates as other B&B news comes in. Stay tuned to the CBS soap and don’t forget to check CDL often for the latest Bold and the Beautiful spoilers, updates, and news.