BY Heather Hughes on August 7, 2019 | Comments: one comment
Related : Soap Opera, Spoiler, Television, The Bold and the Beautiful 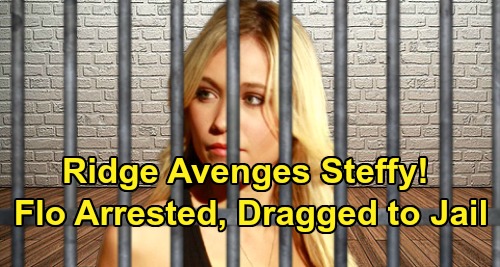 The Bold and the Beautiful (B&B) spoilers tease that Florence “Flo” Fulton (Katrina Bowden) will have to face the music. Ridge Forrester (Thorsten Kaye) was furious after Flo came clean about her participation in the baby swap scheme. He can’t believe Flo would do something so cruel to Hope Forrester (Annika Noelle) and now Steffy Forrester (Jacqueline MacInnes Wood).

Ridge is obviously most concerned about the devastating blow his daughter will face. Steffy’s going to be absolutely heartbroken, and no loving father wants that for his child. Ridge hates that Steffy’s family is going to be torn apart due to Flo’s deception. There were others involved here, but Flo was the fake birth mom and happens to be at the center of the aftermath right now.

The Bold and the Beautiful spoilers say Ridge’s fury will intensify in the coming episodes. He’ll demand more answers from Flo, Shauna Fulton (Denise Richards) and Zoe Buckingham (Kiara Barnes) as he tries to get the complete picture. Brooke Forrester (Katherine Kelly Lang) will be right there with Ridge in his anger, but she’ll at least be happy with the outcome for Hope.

Ridge, on the other hand, will battle another round of rage as Steffy hands over Beth Spencer (River Davidson and Madeline Valdez). This will spark conflict in his marriage and destroy lives, so Ridge will be truly fed up. He won’t be able to rest until Flo suffers consequences, so he’ll make sure that happens during the week of August 19-23.

The Bold and the Beautiful spoilers say Flo’s downfall will finally arrive. Shauna will be horrified as Ridge follows through on his threat to make Flo pay. It certainly sounds like Flo will be arrested. Detective Alex Sanchez (Jeremy Ray Valdez) will be on hand soon, so he may take an emotional Flo into custody as Shauna reels.

Flo’s many apologies don’t change her crimes, which means she’s seemingly headed to the slammer! Of course, B&B spoilers say Flo will have a decision to make at that point. She’ll need to figure out if she’ll enter a guilty or not guilty plea. Shauna might insist that a good lawyer can put the blame on Reese Buckingham (Wayne Brady) and help Flo avoid a serious punishment, especially if Flo agrees to work with the prosecution to convict Reese.

Flo would likely have reservations about not accepting her fate, but this is prison time we’re talking about. She’ll need to consider her options carefully. There’s the potential for some hot courtroom drama here, so it’ll be interesting to see how it all plays out. We’ll give you updates as other B&B news comes in. Stay tuned to the CBS soap and don’t forget to check CDL often for the latest Bold and the Beautiful spoilers, updates and news.