The Bold and the Beautiful Spoilers: Flo Finds Shocking Evidence of Baby Scam – Threatens To Hand Over Beth

BY hellodrdavis on January 21, 2019 | Comments: 2 comments
Related : Soap Opera, Spoiler, Television, The Bold and the Beautiful 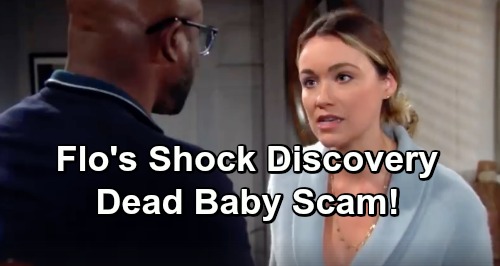 The Bold and the Beautiful spoilers tease that Flo (Katrina Bowden) is going to stumble upon some shocking information. She’s been helping Reese Buckingham (Wayne Brady) by pretending to be the mother of the newborn infant that he’s hiding in his apartment. She trusts Reese, and she thinks that he just needs a little help to facilitate a legitimate adoption.

So far, her ruse as the infant’s mother is going well. Taylor Hayes (Hunter Tylo) was certainly taken aback at first by the revelation that Reese had a baby in his apartment, but she seemed to buy the story that Flo is the infant’s mom who wants to give her baby a better life.

But it’s become apparent that there’s a lot about this baby situation that Flo doesn’t know. All she knows is that Reese got a baby girl from somewhere and that he really wants to convince Steffy Forrester (Jacqueline MacInnes Wood) to adopt her.

Flo doesn’t appear to know that Reese apparently kidnapped the baby from Hope Spencer (Annika Noelle) and Liam Spencer (Scott Clifton), while leading them to believe their baby died.

Flo also doesn’t know that Reese owes a massive gambling debt, and that his own daughter Zoe Buckingham (Karina Barnes) will be seriously harmed if Reese doesn’t score some cash and fast. Reese really needs this adoption to go through in order to pay off his debt.

Despite being in the dark, Flo has her suspicions, and she’s questioned Reese about the baby and about whether he’s in some sort of trouble. But Reese hasn’t been forthcoming with her. He probably figures that the less she knows the better.

Besides, if she knew the truth about where the baby came from, then she’d probably insist that Reese drop his plan pronto. It looks like Flo’s suspicions may soon lead her to do a little snooping.

The Bold and the Beautiful spoilers say that Flo will find something indicating that Reese may have a scam going on, and she’ll be furious. She’ll confront Reese with the information, and he’ll have to admit that there’s more going on with this baby situation than he initially told her.

But chances are, he won’t tell Flo everything. In fact, he’ll probably just tell her as much as he has to, in order to protect his secrets. Still, whatever he does tell her will be enough to cause her considerable concern, and her first reaction will be to leave and just wash her hand of Reese and the whole situation.

But B&B spoilers say that Reese will sweet-talk Flo into staying. He really needs her to keep playing the role of baby mama now that she’s already met Taylor, so he’ll turn on the charm. Flo seems to have a soft spot for Reese, so she’ll ultimately agree to stay and continue to help him.

What do you think Flo will find that will cause her so much concern? Stay tuned to the CBS soap and don’t forget to check CDL often for the latest Bold and the Beautiful spoilers, updates, and news.